My favorite week of the year isn't Christmas, or Easter, or my birthday week. I live for San Diego Restaurant Week. Part of the attraction is that it started four years ago, the same time I started law school. It was a break from studying where my broke friends and I could indulge in a three course gourmet meal and not break the bank.

Jon and I have made it a point to go every year - even after I moved out of San Diego. I plot my selection well in advance and call for reservations the moment the week is announced. We love to use it as an opportunity to try restaurants that ordinarily might be out of our price range, or, more frequently, an opportunity to enjoy more food than we would normally order for less than we would normally pay.

This year we headed down to San Diego early and decided to catch a movie. We went to see National Treasure 2. I love artifact-adventure movies, so I can hardly blame Nicholas Cage for creating a series that places him in an Indiana Jones type role. The movie is great for what it is, but I personally found the pacing of the film to be a little backwards. There was not enough exposition in the beginning and I found myself feeling unconvinced as to motive since no one explained "what's in it for them." Then, at the end, as you're getting ready for a fast paced, adventure packed resolution, it drags on and on. I would have preferred it the other way around. The "bad guy" is an undeveloped character that needed a little more time on paper before being fleshed out.

After the movie, we stopped into Steve and Barrys, which I'd read about, but never seen. It was so much fun! Everything in the store was $8.98! Jon got a couple shirts and I got a new pair of jeans and pants. Following the trend of designers in retail stores, Steve and Barrys features lines by Venus Williams, Amanda Bynes, and Sarah Jessica Parker. My jeans were from SJP's Bitten line and I really loved the way they fit. For less than $9, it wasn't hard to justify the purchase.

Finally, it was dinner time. Our reservations were at The Prado at Balboa Park. I'd been wanting to try this restaurant for years for several reasons. Firstly, it's located in Balboa Park, which is my favorite place in all of San Diego. The museums, the gardens, the fountains, the architecture. I love it. Secondly, The Prado is part of the Cohn restaurant group. The Cohn family is responsible for some of the most delicious, most innovative restaurants in all of San Diego. The food is always excellent, and the ambiance is usually better! The third reason I've been anxious to try this restaurant is that I've only heard rave reviews about it. In addition to great meals, my friends have raved about the incredible happy hour where drinks are $2.50 and appetizers only a bit more than that. I had actually made reservations here last year during restaurant week for a friend and I, but something came up and we were unable to make it.

Appetizers
As soon as I saw the menu online, I knew what Jon would want to order for appetizers. I was right. 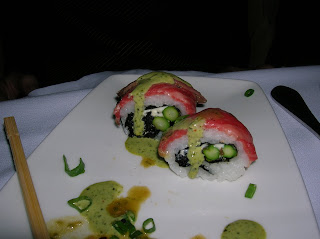 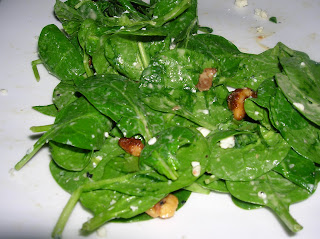 On the other hand, I ordered the organic baby spoon leaf spinach salad with, candied walnuts, Nueskes apple wood smoked bacon, crumbled maytag blue cheese & a, Dijon-champagne vinaigrette. Jon isn't a fan of smokey bacon, but I love it. This was some of the best I'd had - so smokey it brought back memories of the fresh bacon Haley and I had in Tennessee.

I was going back and forth between two entrees. That's why I love going to dinner with Jon. Usually he loves the same kind of food I do, so we're torn between the same entrees. We each get one and we split it. That was the original plan here...... 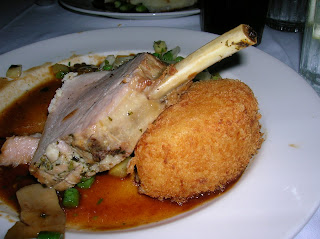 Until I got my meal. As soon as I saw the slow roasted pork prime rib with aged white cheddar potato croquette, I knew I wouldn't be sharing. The sauce was a roasted apple demi, which perfectly complemented the pork, though Jon noted the pork had enough flavor on its own. The potato corquette was a little piece of fried heaven. I seriously was hoping Jon wouldn't notice it so I could have the whole thing to myself. The cheese, the potato, the golden goodness. 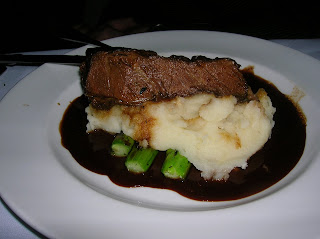 Jon didn't do too badly with his choice either, braised boneless beef short rib, charred asparagus, roasted garlic crushed potatoes. His sauce? A chocolate espresso demi. At first Jon was concerned that he wasn't given a knife, but as his fork sliced through the tender meat, he understood why. The meat was so flavorful I knew I would have been happy with that choice too. But those crushed potatoes just couldn't compare with my croquette.

As I've pointed out before, I'm not a giant dessert fan. It's usually too sweet for me. When we go out, and especially during restaurant week, this works out very well for Jon. We don't usually order dessert, but if we do, we order 1 dish, I take a bite, and Jon eats the rest. During restaurant week, Jon gets 2 desserts! We packed up half our dinner in anticipation of these desserts. 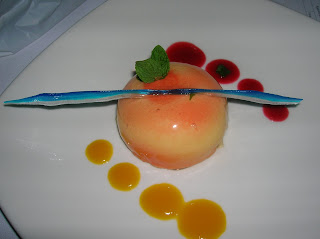 I had the mango bombe, which was glazed mango mousse & vanilla crème with a raspberry coulis center. That blue thing on the top? Hand drawn sugar. This was soooooo good. Light, fresh, and as Jon pointed out, left a very pleasing mango aftertaste in your mouth that tasted like you'd just eaten a piece of mango - not artificial at all. I did give Jon a taste...before I ate the whole thing. The whole dessert. Neither of us could remember the last time I'd done that. I later felt very guilty when Jon confided that I had ordered the better dessert - I should have split it with him. I'm a terrible person. 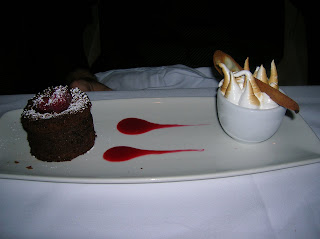 Jon ordered the warm Belgian chocolate soufflé cake served with a frozen triple espresso cappuccino. I knew he would. That boy rarely turns down chocolate. This, I only needed a small bite to determine it was too rich for me. Not for Jon though. Although, I must say, Jon showed amazing restraint by not finishing that triple espresso cappuccino since he thought it would keep him up all night.

The restaurant itself was absolutely gorgeous with wrought iron amber lighting, decor made from antlers and blown glass, photography on every space. It was a warm atmosphere that was equally as suited for a girls night out as a romantic evening for two. We enjoyed the food and I decided if I lived in San Diego, this would be the place I'd take all my out of town visitors. Capping off the evening, our server presented us with three $10 gift certificates to use over the next three months. Oh don't worry. We'll be back.......