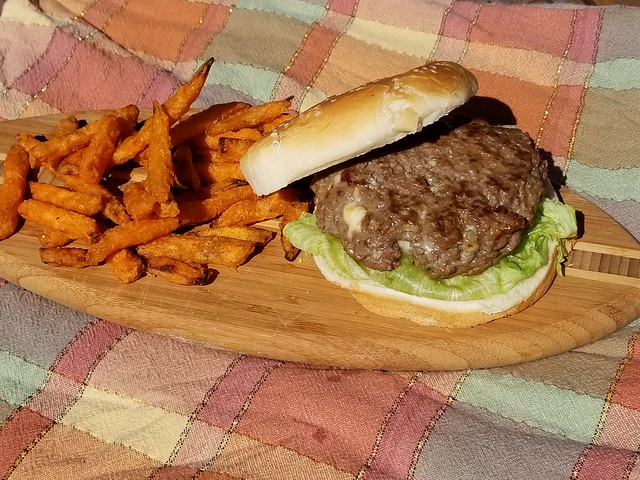 My family loves fast food.  Me?  Not so much.  There's just nothing appealing to me about thin, flat burgers which taste more of salt than meat.  This is especially blasphemous in the land of "In N Out," which is proclaimed as heads and tails above all other fast food.  Spoiler alert guys - it all tastes the same to me.

And fast food cheeseburgers?  Thin flat patties topped with a slice of processed cheese-like product?  No thank you.

When I want a hamburger, fast food just doesn't cut it.  I'm more than happy to go to a sit down burger restaurant, or a restaurant with fantastic burgers (funnily enough the best burger in town is at the fancy French restaurant!), or even just make it at home.

And when I make burgers at home, I can make cheeseburgers with a much better meat to cheese ratio.

How do you get that ratio you ask?  Well I'll tell you - you mix the cheese in with the ground beef!  This means with every bite, you're getting just the right amount of meat and cheese.  For the kids, I like to use a mix of cheddar and mozzarella (sometimes they complain that just cheddar is TOO cheesy - ha!  Like that's a thing.)  But for the grownups?  There's nothing like a good blue cheese burger. 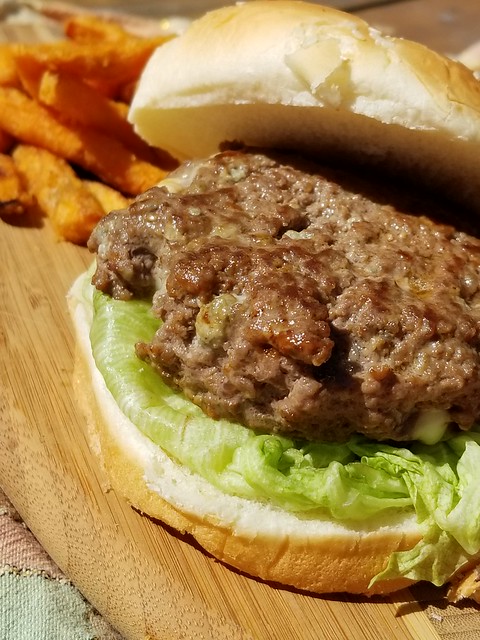 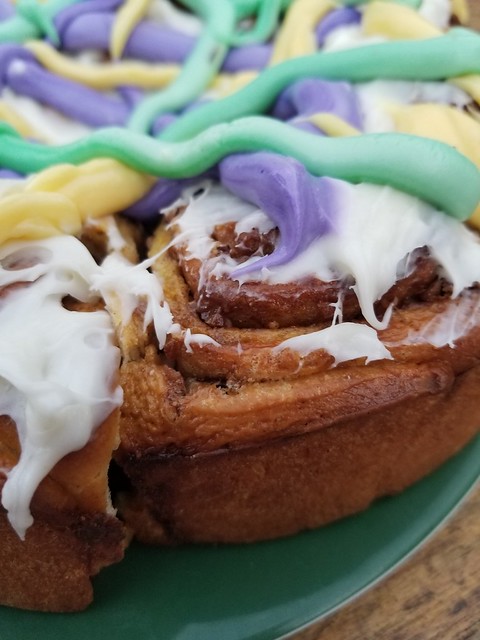 Confession time.  We don't actually celebrate or do anything for Mardi Gras round these parts.  It's a pretty Catholic holiday despite the fact that I think it's taken on a great deal of secularization in New Orleans.

Which is really one of the things that's most attractive about it.  The whole New Orleans connection.  Because that's just one of those magical places I am dying to visit.  Not DURING Mardi Gras, because the idea of being in those crowds of people is completely and totally overwhelming to me.  Thatmom and Thatdad used to make yearly pilgrimages there, and bring us home Cafe du Monde beignets and THAT is what started the love.  The food.  I love Creole food, and New Orleans (while it has plenty of other amazing things to offer) has some fantastic food.  Which brings us right around to Mardi Gras again.

I saw a recipe for King Cake in a magazine recently and it made me realize I could probably get away with making Mardi-Gras food without actually celebrating the holiday.  And rather than make a cake, I decided that I was going to reinterpret the King Cake to something I knew my family would be all over - cinnamon rolls.   While King Cake normally has a glaze for a topping, I'm more partial to cream cheese for cinnamon rolls.  These rolls take the flavors of King Cake and puts them in a single serving (or triple serving if you're Thatboy who eats three at a time) perfect for your Mardi Gras breakfast, brunch, or anytime feast! 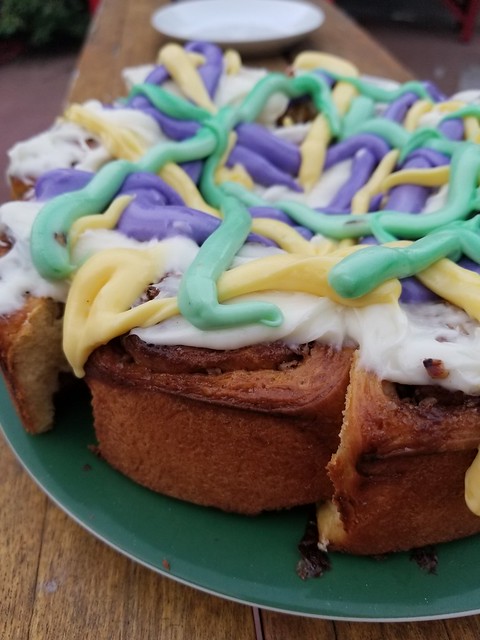 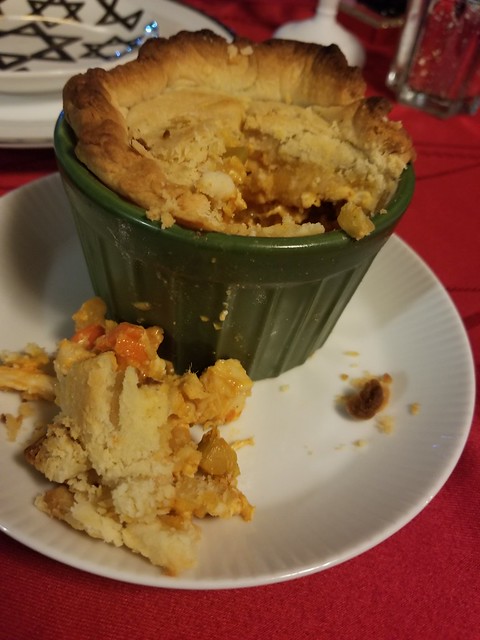 I know I know, I JUST posted a recipe for buffalo wings.  And here's another buffalo chicken recipe!  I can't help it you guys, the weather gets cold and I start putting buffalo chicken in just about everything.  It's such a spicy comfort food for me and the flavor works with just about all your other favorite comfort foods - chili, macaroni and cheese, and yes, even pot pie.

In fact, pot pie might just be the best use for buffalo chicken.  Think about it, buffalo wings always come with carrots and celery anyway, two ingredients of any self respecting pot pie.  So your brain already connects those flavors.  And if you've had buffalo chicken dip, then you're already familiar with a creamy version of buffalo wings.  Pot pie is a less creamy version of that dip - but the warm buttery crust is a nice substitute.

I made 2 individual pot pies with this recipe, because I like the crust to filling ratio better that way, but you could certainly make it into one large pot pie if you're serving a crowd. I ended up with extra filling (I always end up with extra filling) which I used in hand pies that I froze.  You could use the entire recipe to make handpies, they make for fabulous lunches. 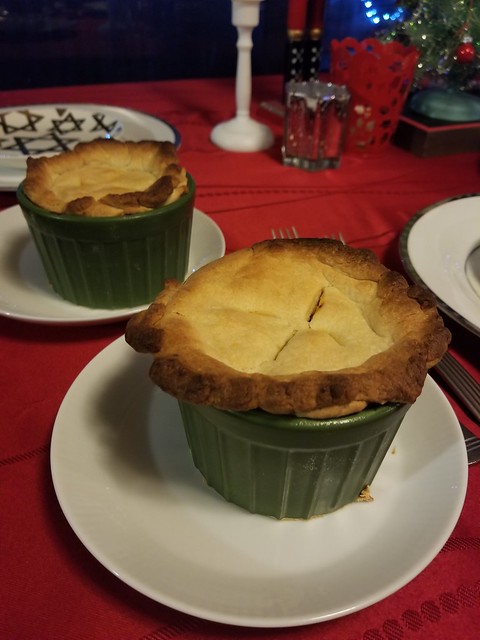 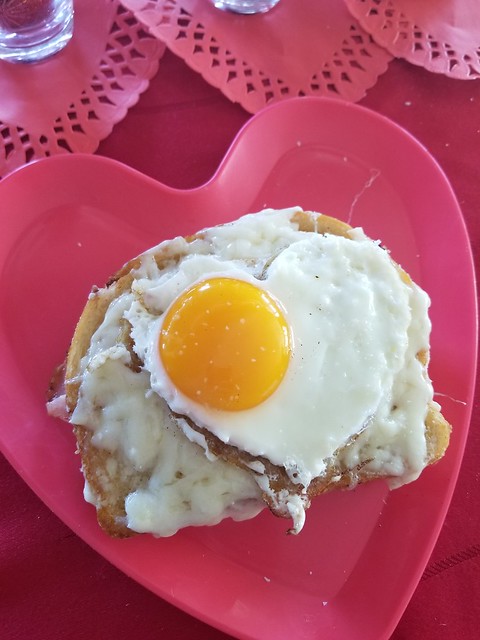 You guys I am killing it this Valentine's Day.  It's February 5th and I've already got presents for all three of my guys.  I'm never usually this on top of it.

I've even got our Valentine's Day menu already planned out, important since Thatkid is off school for the day and if you have kids you know they turn into eating machines when they're home.  I honestly don't understand it.  He often comes home from school with his lunch, still untouched in his lunchbox.  I have to convince him to bring snack for snacktime.  And yet, when he's not at school, he's "hungry" every 15 minutes.

So my goal for Valentine's Day is filling meals to keep him from complaining all day.  That, and putting him in charge of making it himself.  A croque madame has different components that he's already familiar with, put together in a new way.  It's got the white sauce he uses when he makes macaroni and cheese, along with a fried egg - one of his favorite things to make for dinner.  Plus it seems extra Valentine-y to make a French sandwich, doesn't it?  As they sing in the age-old classic, Anastasia, "The French have it down to an art." 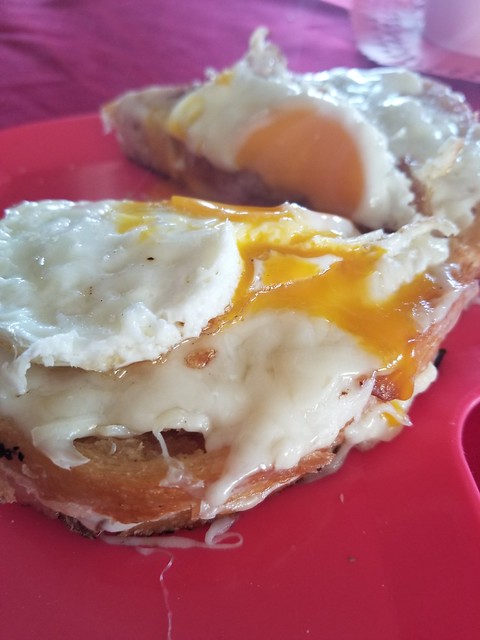