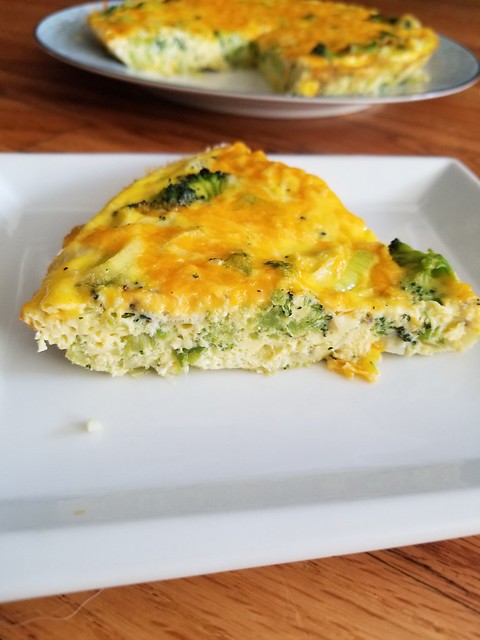 This may be a problems that only we face, but my inlaws find it absolutely impossible to find any Passover friendly foods for Easter.  On the off chance that there are others out there facing the same conundrum, I thought I would share some amazing Easter brunch foods, that also work for Passover.

In truth, it seems like the easiest thing - I mean, Easter is all about the eggs, right?  And eggs for breakfast is a very Passover thing.

Let's be honest, eggs for everything is a very Passover thing.  We make good use of those hardboiled eggs we dye for Easter! 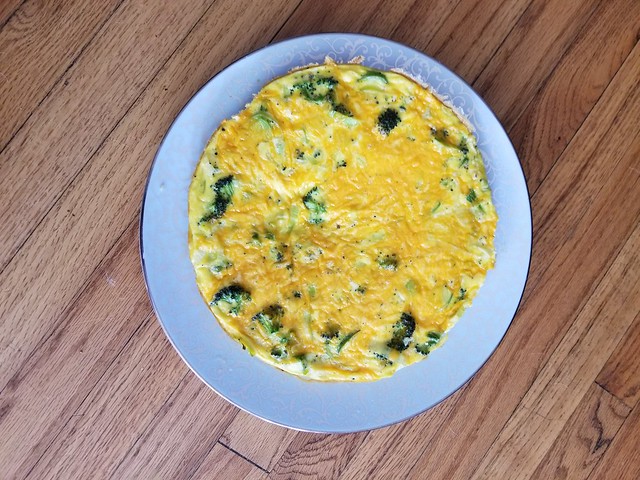 The best part about this frittata?  It doesn't really matter if you celebrate Easter or Passover.  Filled with green veggies that seem to just bridge the gap between winter and spring, this is really the perfect breakfast for any group gathering.  Or - since we're not supposed to be gathering in groups right now....this works really well to give you breakfasts (or lunches) for a couple days.  The vegetables inside are hearty and withstand a day or two in the fridge. 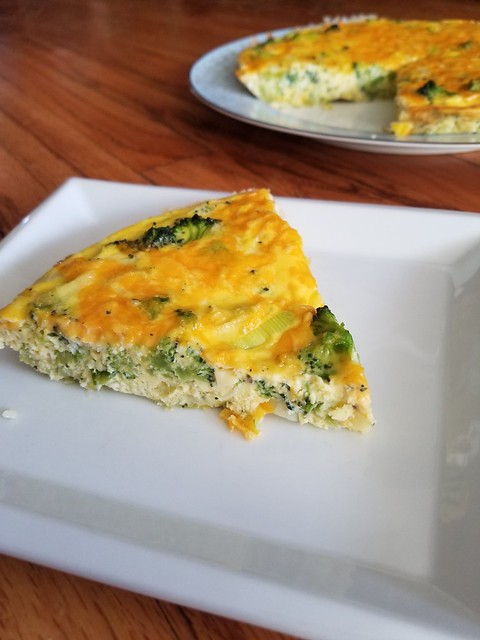 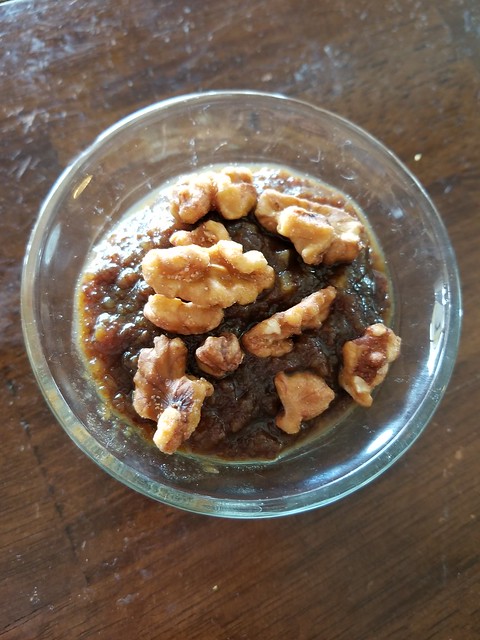 This past Sunday was supposed to be Mitzvah Day at synagogue.  We gather together and do volunteer projects and community service.  Thatkid and I signed up to bake and package cookies for Holocaust survivors.  So my brilliant plan was to make the cookies with Thatkid and then blog about how amazing they were, sharing the recipe with you.


But with the Covid-19 Pandemic closing schools, businesses, and religious services, we also cancelled Mitzvah Day.  So instead of sharing cookie recipes, I'm going to use these next few weeks to share Passover/Easter recipes.  Especially since we won't be traveling for either this year!

We'll start with the Passover seder, which is especially timely as I just figured out I may be in charge of making my own - for the first time in years!!!!  I really need to get on that menu prep and start buying things as the supermarkets make them available.

One thing I know I'll have is haroset.  Haroset, one of the most traditional Passover foods beside matzoh is a dish made by combining fruit and nuts.  The color and texture is supposed to resemble the mortar used by the Israelites in construction during their time of enslavement in Egypt.   This is one of the big differences between the Sephardic (Mediterranean/Middle Eastern/African) Jews and Ashkenazi (Eastern European) Jews.  I grew up in the Ashkenazi tradition with haroset that never resembled mortar.  Instead, the Ashkenazi haroset is made of grated apples, nuts, red wine, cinnamon, and honey.  It is sweet and light and exceptionally fresh tasting.  It also does not keep all that well.

This Sephardic haroset will definitely last until Passover next month!  Made with dates, raisins, and sugar, it is easy to see the resemblance to mortar.  It is also exceedingly sweet!  I'm excited to try it with horseradish - a necessary combination at a seder.  So sticky and sweet, I also think it would make an excellent filling for a cinnamon roll.  Or a Passover version of a cinnamon roll. 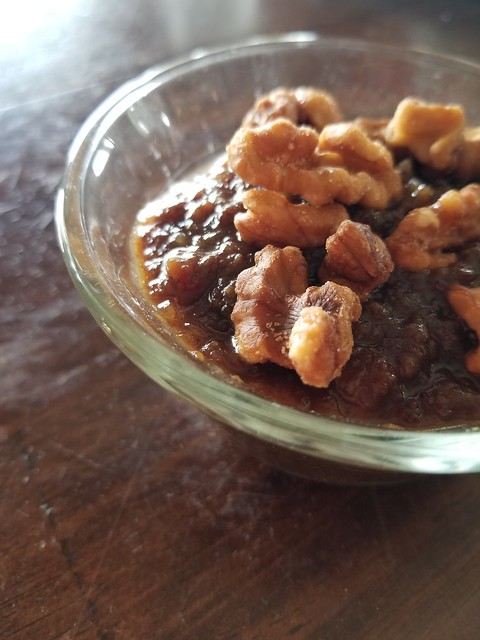 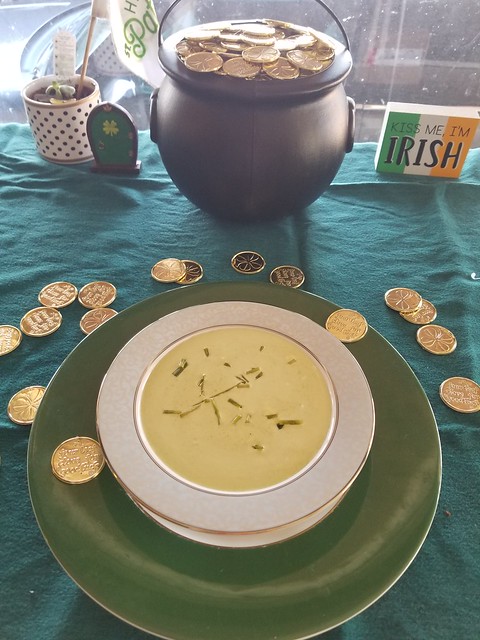 St. Patrick's Day is pretty set when it comes to food in my house.  Thatboy isn't happy unless he has his corned beef for dinner.  And I made the mistake of giving the kids Lucky Charms for breakfast ONE YEAR and now it's become a whole thing.

But that leaves lunch wide open.  Well for the grownups anyway.  Thatbaby has lunch made for him at preschool, and Thatkid is in charge of making his own lunch.  The good news about that is I can make things to eat that the kids wouldn't necessarily enjoy.

I learned my lesson the hard way that the kids don't like chilled soups.  I made a chilled pea soup and while they liked the flavor (since they love peas) they were highly unimpressed by the lack of warmth in the soup.  Which is fine, because as the weather warms up, a chilled soup makes a better lunch than dinner anyway.  Something very light and springy - and the green color is appropriate for both the upcoming season as well as St. Patrick's Day.

I don't think of avocado as having an especially strong flavor, so it's especially lovely with a little citrus and cream. 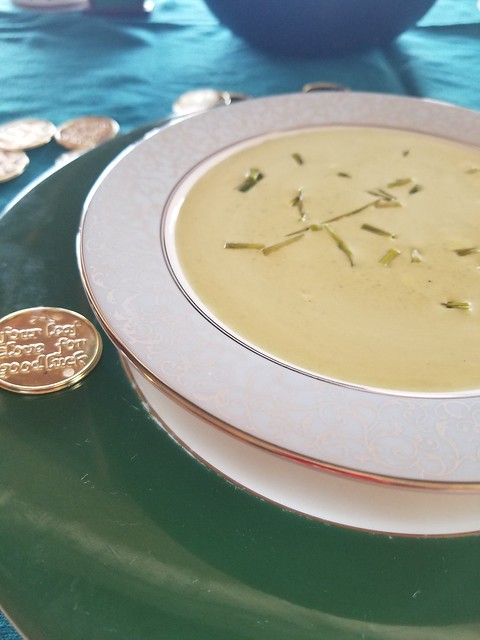 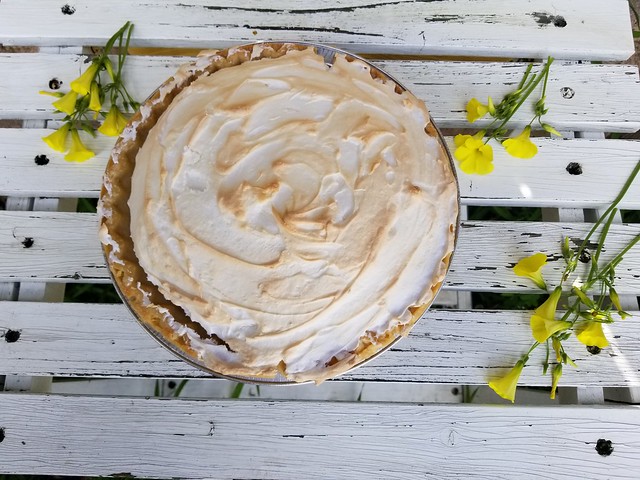 In the Jewish tradition, trees are planted to commemorate the birth of a child.   When a boy is born, the foreskin is buried beneath the tree following the circumcision.  The tree is supposed to grow along with the child, and when the child marries, the branches are used to create the chuppah, or wedding canopy.

We chose to use a lemon tree which has (4 years later) finally started fruiting!  Which is pretty exciting.  I mean, we got 2 weird looking lemons that never turned yellow last year, but this year we've got multiple lemons, and more on the way by the way this thing is flowering.

So I really wanted to use the lemons to make a pie for this year's Pi Day pie.  Only problem?  I've never made a lemon pie before.  TMIL makes lemon meringue pie, and while in general my takes on her "classics" come out better than the original, this is one I just wasn't willing to mess with.  Not with Thatboy's obvious affection for it.  I didn't want to risk the comparison.

But, I can follow a recipe, and so I pulled out my James Beard Cookbook and gave it a shot.  And you guys?  The recipe was just no good.  No really.  I ended up with lemon soup instead of lemon curd and when I tried to figure out why I stumbled upon the fact that EVERY other lemon meringue pie recipe calls for boiling the filling, while my recipe tells you to take the filling off heat just before it boils.  Which (I learned) makes the cornstarch never activate and the filling never thicken.   I will say though, that Thatboy happily ate the pie with a spoon from a bowl and declared it the best lemon curd he's ever eaten.

Meanwhile I decided to move on to the next lemon pie recipe and see if I stood a better shot at that.  This one creates a lemon marmalade instead of a curd - using the entire lemon, peels and all.  Learning from my last mistake, I cooked this one for much longer than the recipe called for, making sure it got very thick before removing it from the heat.  In various forums I read, I noticed they mentioned you should be able to cut through the filling with a knife before putting it in the crust.

And this time the filling set up!  A nice, tart filling that's perfect for the upcoming spring, holidays, and even Pi Day next week! 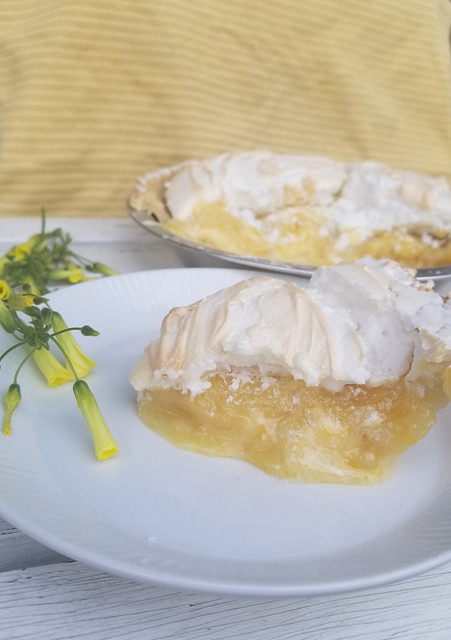