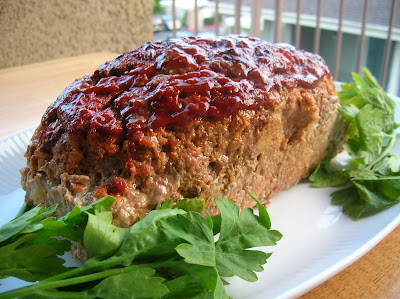 I love traveling, but I also miss the comforts of home. Especially my kitchen. The timing of this trip wasn't amazing though, because we got back just in time for the New Year. Which means my usual prep work for Rosh Hashanna has gone right down the toilet. No fancy holiday feast for us. And there's so much going on with my family right now there's no fancy holiday feast for them either. And for any of you who have any Jewish friends, you'll know that there is no holiday without a fabulous meal. We're postponing our fabulous meal until this weekend, and enjoying it with friends, in our home.

Instead of wowing you with a harvest feast to end all harvest feasts, I'll send you over to Cara, who is sure to have something droolworthy posted soon. Here however, I'll leave you with one of Thatboy's favorite meals. Meatloaf.

Personally, I've never been a meatloaf fan. I think it's the combination of the name and the concept. I mean...a loaf....of meat.... Really, it's not that different from a hamburger, except for the loaf shape, right? But for some reason it's just not my thing. So as usual, I avoid making it for as long as I can. When I do make it, I tend to make a turkey meatloaf, which to me is a little more appetizing (again, I can't explain this). While Thatboy originally balked at the idea, he's actually grown to love and defend turkey meatloaf.

Based upon a discussion I had on my cooking board, I thought I would try a different kind of meatloaf. The lovely and talented women told me that a lot of meatloaf mixes combine three different meats - ground beef, ground pork, and ground veal. Each meat is supposed to contribute a different attribute to the meatloaf (flavor, tenderness, color, etc. etc. etc.) I figured I'd give it a whirl. But there is one aspect of the meatloaf which I just can't veer from. Thatboy will put up with all my variations as long as there is a ketchup crust on top, so you can see the beautiful red cover of this meatloaf.

For me, this meatloaf was good and very flavorful, but it's still a meatloaf in all it's glory. Thatboy liked this a lot. But he does love his meatloaf. The funny thing is, even though he liked this, he told me he prefers my turkey meatloaf! L'Shana Tova everyone. 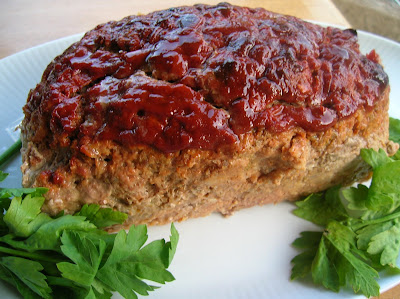 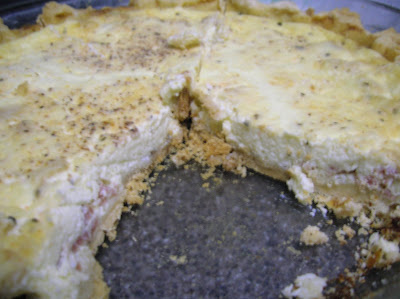 I decided to try a new recipe and learned a very valuable lesson. Don't mess with pie crust. Just don't. Growing up, my mom was the baker in my family. While my dad was master of the grill, oven, stovetop, and fluffernutter sandwich, my mom was queen of cakes, cookies, and pie. But my mom never made her own pie crust. She told me she could never be bothered, it was too much trouble and not worth the effort. So I never had a tried and true recipe past down to me.

Last year around this time I decided to try my hand at my own pie crust. It was my first one ever. I used Alton Brown's method and it came out perfectly. Light, buttery, flakey, flavorful, and most importantly - insanely easy. I couldn't understand what my mom was complaining about or why she never made it herself. I continued using this easy delicious recipe all this past year.

And then I decided I should try Williams Sonoma's recipe. I mean I love that store and in general their recipes are pretty good. I've been making quiche a lot lately because it doesn't take long and gives us breakfast on the run. So I tried Williams Sonoma's Quiche Lorraine. It looked simple and pretty (which are two requirements for me for cooking). I figured I'd go whole hog and make their crust recipe too. Big mistake. Huge. The dough just wouldn't come together, it became a crumbly mess. And it wouldn't form nicely in the pan. As I cursed my experimental nature I understood my mother's frustration. After working the dough over I was finally able to make a semblance of a pie crust. And then came more disappointment - it wasn't very tasty. Normally the crust is my favorite part and for this quiche I left the entire crust. It just was tasteless and dry. Boo.

So the moral of this story? Pie crust can be very good or very bad. If you find a very good recipe - stick with it. 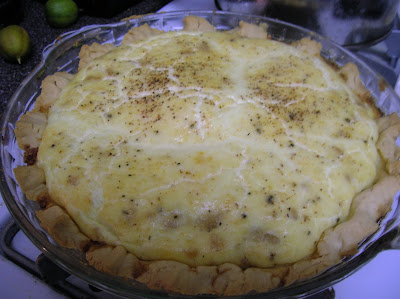 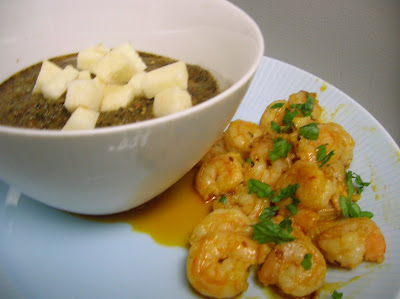 We are finally back home...well actually we got in yesterday afternoon, but ever since then it's been run around run around run around. I mean no one seems to pack a schedule like I do! A few hours after we landed we were headed to the theater...and again today...whew!

And can I just tell you something? It is a lot warmer here than in the Southeast. A lot warmer. So a cool soup and the last of the summer shrimp just seemed like a good way to bid adieu to our vacation and the summer.

You may recall my amazingly wonderful gazpacho. I know I do. I still get kinda looney-eyed when I think of it. But you also may recall I like to mess with a good thing, so I decided to make a green gazpacho with tomatillos instead of tomatoes. I mean, it sounds like a good idea, right? Okay so here's where I get a little philosophical. Does anyone know the difference between salsa and gazpacho? Because frankly this stuff looked and tasted just like my favorite salsa from Baja Fresh, or the restaurant I used to work at. Nowhere near as wonderful as my first gazpacho - which thinking back would also have made a pretty good salsa.

The redeeming factor was, as always, the shrimp. Loaded up with garlic and oil it's one of those recipes you just can't mess up. 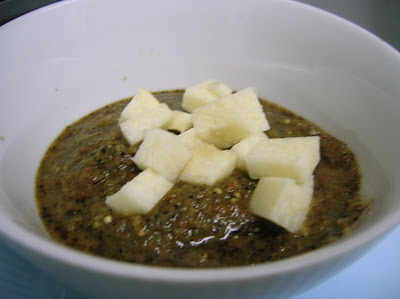 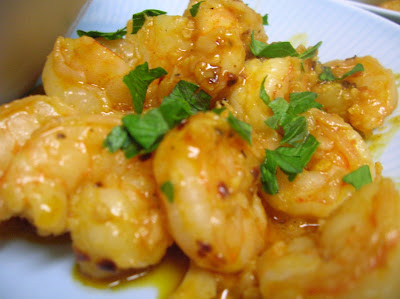 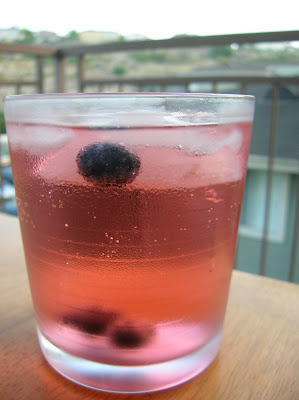 The month of August was completely filled with music for us. Thatboy and I were so excited for our move because the music scene down here is fantastic. We had so many memories of great concerts and were looking to repeat the experience. And we started in August, going to some of our all time favorite performers in fantastic venues. We're looking forward to continuing this trend in the upcoming months.

The first concert we went to was at my request. Did you ever have "that band" that you fell in love with in high school? For me that was REM. I loved REM. I compared every band out there to REM. My friend told me about a band he was really into and my first question was "how do they compare to REM?" He made me a mix tape. Does anyone out there remember mix tapes? Well he gave me a mix tape of The Gin Blossoms, and I was hooked. I listened to that tape over and over again before buying all their cds. I waited up every night until "Follow You Down" came on the radio. My boyfriends would call the local radio station and request it for me. My late night phone calls always ended with the phrase "It's on! I'll talk to you tomorrow." Finally I was able to get myself to a concert and I was in heaven. And it was the last concert I'd be able to go to, because within a year the band had disbanded. I was devestated. I was in the car when I found out and "Allison Road" had just finished playing when the DJ announced the breakup.

So when I heard that the Gin Blossoms were playing nearby, in an impossibly small venue I begged and pleaded to go. I stood about a foot from the stage and sang along to every song, with Thatboy actually enjoying the experience more than he thought he would. It took me back to simpler times and the band is just as fantastic now as they were then. I knew at that moment that I wanted to dedicate this month's Eat to the Beat to the Gin Blossoms!

Now here's the tricky part. There's not really anything food related in any of their songs. So I got to thinking. The band's name comes from a painting they saw of Monet and Gin Blossoms. So I thought I could find a recipe that used Gin Blossoms. Which would actually make sense if I could get my hands on some Gin Blossoms....which I can't. Or at least, not especially easily. So I decided it would be fitting to create Gin Blossoms - a gin based beverage in tribute to a band who definitely can hold their liquor. Not convinced? Let's look at some of the lyrics.

In fact, quite a few of the songs involve drinking more than you can handle. I think the band would approve of a drink named after/dedicated to them. So everyone, it's Memphis Time - time to sit back and enjoy a nice refreshing Gin Blossom. 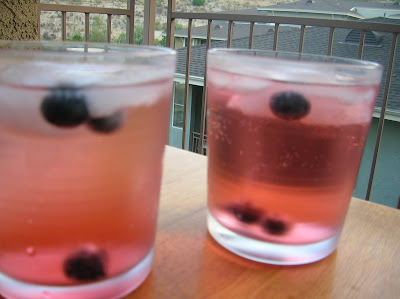 Oh, the judge she guilty found her 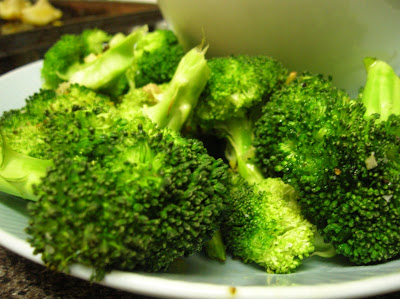 So last night we went on a ghost tour, which is one of my favorite things - even though I am the world's biggest scaredy cat. There's something about safety in numbers though right? And there's always so much interesting history that gets revealed during the tours.

The tour ended in the hanging square, in the dark, where we were told about the bodies of executed men and an Indian Chief that lay beneath our feet. As she told us the stories of the executed, she mentioned that there were no lawyers, no judges, that each condemned person was condemned by the entire town without a trial. As much as I berate the current legal system, it is nice to know that at least there is some formality involved. Unlike the case of poor Alice Riley, an innocent woman beaten to near death by her employer. When her husband came upon them, he killed the man and both were hung - Alice held in the stocks for months until she gave birth to her child first.

I had visions all night of the haunted squares, just filled with people walking through them. Crossing back and forth. Walking can symbolize the passage of time and its possible I was thinking about the years that passed. I miss the history of the East Coast, and I miss the green. The green that is never quite the same here on the West. Traveling with Thatboy, it was the first thing he noticed on his first visit to the East Coast. The green.

Commemorating the green coast and the green squares, here's an easy veggie recipe. Another one that might get you nonveggie eaters to enjoy. The roasted broccoli stays crisp and a beautiful shade of green. It's flavorful and the lemon gives it a fresh taste. 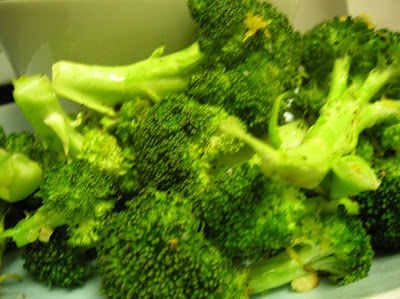 Serves 8.
Each serving has: 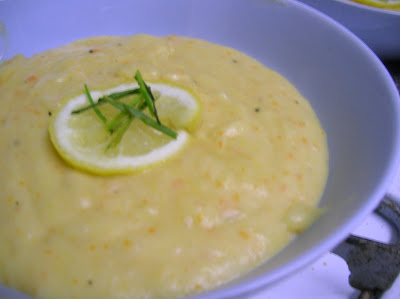 I am so glad the weather is getting colder. I know I'm the same girl who was looking forward to summer, but by the end of the winter I forget how much I love cold weather food. Warm and cozy stay inside food like soups!

This is one of the easiest soups ever. It takes about as much time as mashed potatoes but if you were to serve mashed potatoes for dinner everyone would look at you strangely. Instead serve this. It's creamy, it's filling, it's warm and comforting. It's perfect for curling up and enjoying a roaring fire - and by the way I can't even begin to tell you how excited I am to use our fireplace this winter! 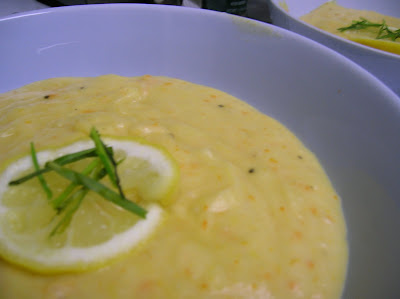