A quick pick me up 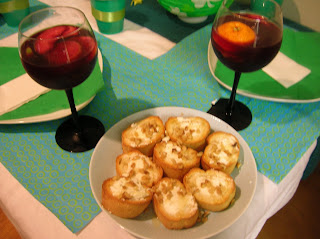 On Friday night, I spent the entire evening cooking and cleaning. It was a long evening. Whenever I have a lot to do around the house I like to turn on the tunes, pour myself something to drink, and whip on something quick to snack on. Cheese on bread is a great little snack and perfect for last minute company. 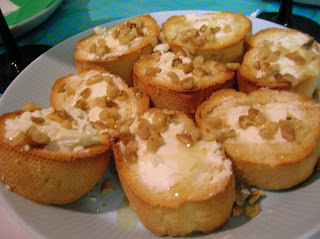 This is goat cheese on toasted french bread. Want to fancy it up even more? Toss on some chopped walnuts and drizzle with honey. This snack goes especially well with some homemade sangria. I know both of them make my chores go by much much faster!!
Posted by That Girl at 7:27 PM 11 comments:

Sometimes things are quicker when they're already made... 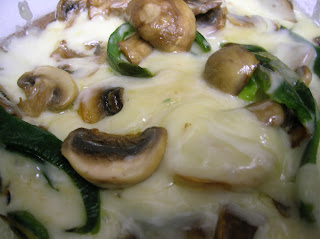 I highly recommend TJ's carne asada for those nights when you just want a quick meal without the fuss. I use this almost exclusively for my steak fajitas. When Jon lived further north, we had access to a great carniseria, but as we've moved farther and farther south, we haven't had the time to explore and find one close to us, so this is a great second best.

Even though they don't take very long to make, like any great Mexican restaurant I like to give my table a little something to snack on while they wait, so I stir together some roasted pasilla pepper, mushrooms, and Monterey-Jack cheese and serve it with some tortilla chips. Of course, this also gives me something to work on while I wait the 10 minutes for the steak to be done....

Chop up some jicama and throw it together with some romaine and a little lime cilantro dressing and you have either a side salad or some tangy greens to wrap in your tortillas. It's downright healthy! 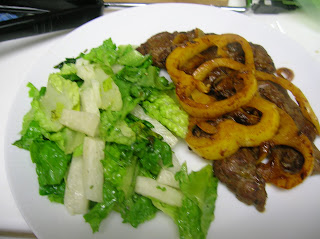 Serves 2
Each serving has: 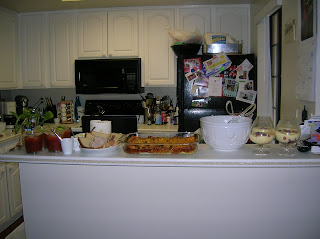 It was an awfully busy day today. We began with a brunch with my brother and his new girlfriend. She's a cutie! 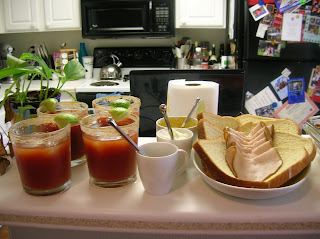 For me, every brunch NEEDS to have bloody marys. It's essential. And just in case anyone was more in the mood for lunch instead of breakfast, I like to have sandwich fixings ready to go. 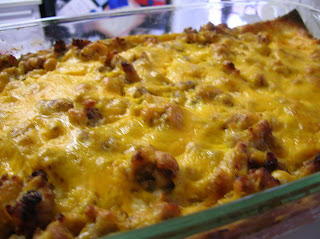 But of course, breakfast is the most important meal, so there had to be some breakfast food. Like this egg and sausage strata. 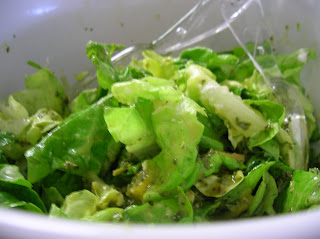 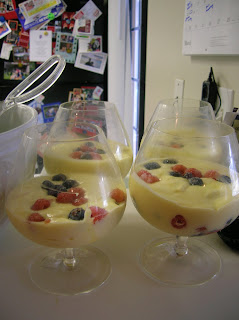 And for dessert - lemon curd and berry parfait. There was way too much of this stuff. I think we all ate till we were sick!

After brunch Jon, Ringo, and I headed to San Diego for the rest of the day to look for a new place to live. There will be much much more to update with that later.

We came home exhausted so I suggested we pick up something from the new barbecue place I've been dying to try, Smokey's House of Barbecue in Dana Point. The portions here were ridiculously huge. RE-DICULOUS. And all the meals came with a choice of two sides. 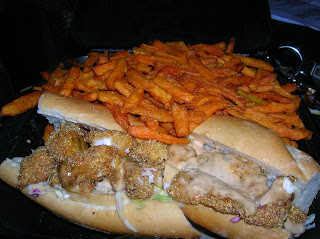 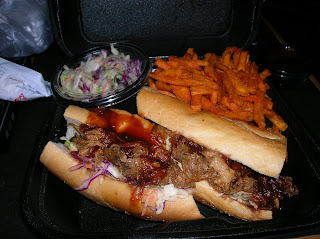 Jon got the catfish po-boy with sweet potato fries and baked beans. Because the beans came in a separate tub, they loaded him up with extra sweet potato fries. He could hardly put a dent in them after eating his entire sandwich. Every mouthful had him moaning about how delicious it was, especially the sauce, which I think he licked up when he finished. I wasn't quite as impressed with my pulled pork po-boy, but I was definitely full after half. I didn't make much of a dent in my fries either. But I do think they are the best sweet potato fries I've ever had. And the grand total for this meal to feed a small island? $19.00 (well....plus tax).
Posted by That Girl at 8:33 PM 11 comments:

How do you say Shrimp in Spanish? 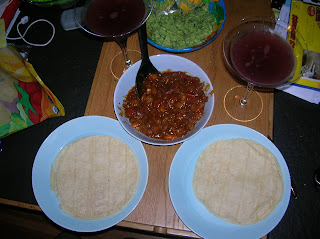 I'm just joking. After working as a waitress in Southern California for a million years, I know how to say most every food in Spanish.

Another one of my "lazy dinners" is fajitas (pronounced fah-hee-tahs and not fa-Jie-tahs as one of my customers tried to order). Since its been busy this week, I'll let you in on a couple of my favorites.

I love love love shrimp fajitas. Most of the time I just grill some shrimp with a little salt and pepper and serve them with the quintessential guacamole. 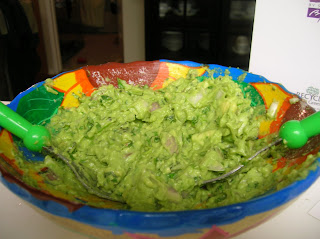 This week I wanted to spice it up a bit, so I kept throwing stuff into the skillet until it became a hot spicy shrimp fiesta. 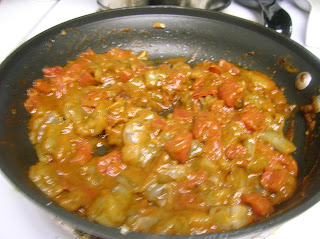 1) Heat vegetable oil in large nonstick skillet over medium heat. Add garlic and cook 1 minute.
2) Reduce heat to medium low, stir in tomatoes and adobo sauce. Simmer uncovered for 3 min.
3) Add shrimp and simmer until shrimp are cooked through, about 4 minutes.
4) Season with salt. Serve with guacamole and warmed corn tortillas.
Serves 5.
Each serving has: 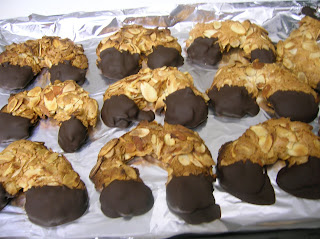 Both my parents are from Brooklyn. Which technically makes me a New Yorker, even though I was born upstate. If that doesn't do it, our tri-annual trips pretty much qualify me as an honorary New Yorker. There are two things I LOVE about New York. The theater, and the food. It's almost cliche to talk about NY food, but sometimes cliches ring true. I am forever spoiled by the Brooklyn bagel (which is far superior to any other borough), delis, and bakeries.

I don't care who you are, you've never had a sandwich until you've had one from the Stage Deli. Last trip there I managed to bring one home for Jon and even after a 5 hour plane ride he agreed it was the best he's ever had.

And as for the bakeries, they're an institution all to themselves. My hands down favorite is Leons, which sadly is no longer. But there is nothing like walking into a New York bakery and looking at all the brightly colored cookies just winking at you, like happy rainbows. This was an especially good trip right around Passover when sweets become less than appetizing due to the absence of flour or leavening agents. But the New York bakeries do it right and most of their delicious treats are made from almond paste! Which is a taste I will always associate with both Passover and New York.

Passover's only a couple weeks away, so its about time to whip out those yummy almond recipes. This is my attempt at recreating a favorite flavor. They came out just how I remember them....almost....nothing's ever as good as the memory! 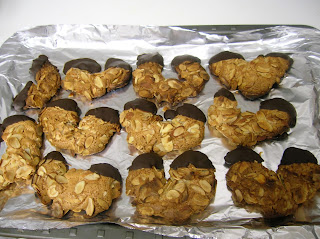 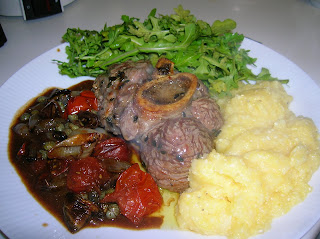 I had stopped off at Henry's to pick up some polenta when I wandered over to the butcher section. They had all sorts of my favorite wild meats like buffalo and ostrich, but then I saw something that really caught my eye. Veal Oso Bucco. Seriously? I had to try it. So into the cart it went.

This is one of those meals that look FAR more difficult than they actually are. With nice meats (as opposed to cheap steaks) all you need is a little bit of seasoning and they're good to go. Polenta? Why just pour it into boiling water and stir stir stir, voila. It's even easier than rice. Since I mentioned before, Jon is on a caper kick right now, I roasted some tomatoes and shallots in basalmic vinegar and then threw some capers into the mix. The entire meal took about 30 minutes and looks like I slaved in the kitchen all day.

As for taste? It was everything I dreamed of and more. The veal was so much more tender than typical Oso Bucco and even the marrow was sweeter - if that's possible. Just try not to think about it too much while you eat or that social conscious is going to be all over you. 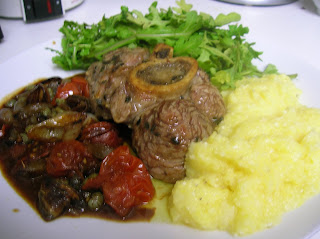 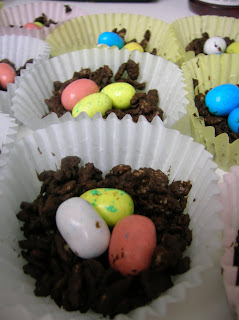 As I said before, Easter to be is equivalent with chocolate and candy. So it was only fitting that this year my Easter contributions would revolve around something sweet. I found the most adorable recipe for Easter Egg nests and brought them in to work. I was quite popular. I also made enough for Jon to bring some in for his coworkers too. Which in turn, made him quite popular. 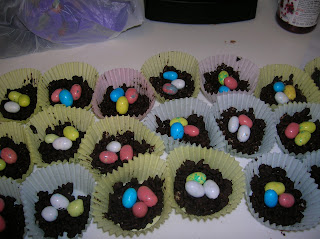 And now for the fun part - since its always fun to hear disaster stories. SIL's birthday was Easter Sunday. Now I admit, in the past I've been very bad. I actually didn't know when SIL's birthday was until I asked this past January. We've never celebrated it, we've never even sent a card. I hold myself to blame, since Jon's family is not very "other" oriented and birthdays typically suck with them anyway. Well I wanted to make up for past behavior and ensure that SIL had a nice birthday since she had to share it with the resurrection of Christ (what a thunder stealer). So I decided to make a cake. Jon and I had watched a Good Eats episode not too long ago centered around milk. Alton Brown had made a tres leches cake that looked amazing and thought that would be perfect. I was making the cake Thursday to be eaten Sunday and what cake retains moisture better than one that has milk and cream dumped over it to soak?

Alton made his cake in a sheet pan, but I thought I'd be fancy and use my springform pan. That was the beginning of the end my friends. 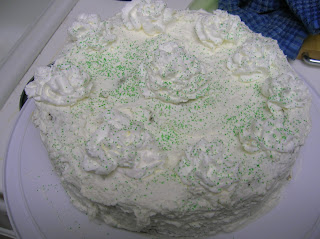 Once again, I would like to remind you that this cake had to travel.....on a plane....and in a car... Now the beauty of the tres leches cake is that you pour the three milks over the cooked cake after poking holes in it, so the cake sits and soaks up the sweetness and the moistness. This is especially true in a sheet pan, where the cake is sitting in the milks.

However, when you make the cake in a round pan, the milks leak out of the cake. Yup. They leak EVERYWHERE. They leak right out the edges of the cake carrier. And since its not just regular old milk, its VERY sticky. And it stains. By the time we arrived at our destination, I was covered in thick, sticky, residue from not one, but three forms of milk.

I was very concerned that by the time we cut into it, every last ounce of moisture would have flowed out of the cake, but luckily, it was still ridiculously moist when we cut into it. And SIL declared it the best cake she'd ever have and begged for the recipe (although I fear the moment she sees "Separate the yolks from the white" it will be all over.). So in the end, it was worth it. But would I ever do it again? No way. 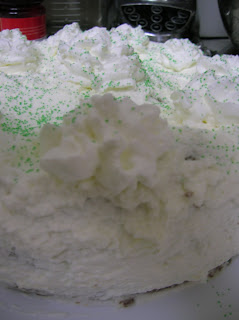 1) Heat oven to 350. Grease and flour sheet pan (only because I want you to learn from my mistakes). In medium bowl beat egg whites with half the sugar until stiff peaks form.
2) In a large bowl, beat together remaining sugar and egg yolks until thick and pale yellow in color.
3) Alternately fold egg whites and flour into egg yolks. Pour batter into prepared pan. Bake for 30 minutes. Let cake sit in pan on wire rack for 10 minutes.
4) In medium bowl, combine condensed milk, evaporated milk, 1 cup heavy cream and 1 tsp vanilla. Poke holes in top of cake with wooden skewer. Pour milk mixture over top of cake. Let sit for 30 minutes for cake to absorb the milk. Cool completely before frosting.
5) In medium bowl, beat together remaining heavy cream, 1/2 tsp vanilla confectioner's sugar until stiff peaks form. Spread over top of cake. Refrigerate at least 1 hour before serving.

Serves 12.
Each serving has: