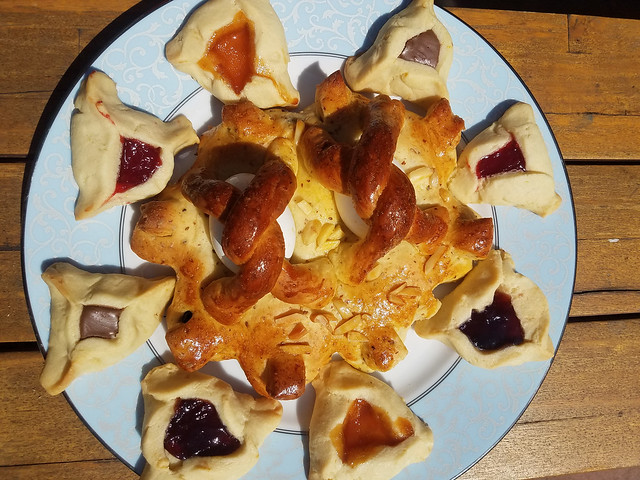 Purim retells the story of the brave Queen Esther who saves the Jews from the evil Haman - the king's adviser who had convinced the king to kill all the Jews in Persia.

Every year the story is told through theatrical performance - known as the Purim spiel.  When Haman's name is said, the audience boos and shakes noisemakers known as "groggers" to drown out the very sound of his name.  Children dress in costume and participate in Purim Carnival games, winning treats and sweets.  They sing songs about the evil Haman, who, although the villain in the story, receives the most attention in the form of songs and sweets.

In Morocco, challahs are turned into "Haman's eyes" - sweet bread with hardboiled eggs baked into it to represent the eyes.  More traditionally worldwide Hamantaschen are eaten, their triangular shape a nod to the three-cornered hat Haman wore.

I grew up every year making these cookies with my father.  And now I make them with my children.  Unfortunately I don't know the recipe my father used - whether he crafted it himself or memorized it after years I'll never know, but he did the whole thing without once glancing at anything written down.  So I have been forced to cobble together my own version from various sources over the years.  Finding a dough that's soft - but not too soft, sweet - but not overly so, and sturdy enough to hold together through the baking process.

The filling is where things get fun.  Traditionally, prune, poppyseed, cherry, and apricot are the flavors used - through jams, jellys, and pie fillings.  But if there's one thing I learned from my dad, is that you don't need to be traditional.  Just about anything can work here.  We used to use chocolate chips or hershey kisses for chocolate hamantaschen when I was younger.  I happened to have nutella on  hand while we were making these, and I thought that would make a fun addition.  Thatkid requested grape jelly.  The only limits are your imagination.

My father always pinched together the dough circle at the top and each side of the bottom to create a triangle.  But when looking over various recipes I came across a folding method I tried out this year.  I'm not sure that one is better than another, but it was a fun new thing to try.  To give the folding method a shot, fold over the left side of the dough circle, then the right side to make a point, overlapping the right fold over the left fold at the top.  Then fold up the bottom, placing one part of that fold under the left fold and one part over the right fold, almost as though you were putting together the bottom of a box.  It's a little more complicated, but does result in a nice triangle.  You can see both versions in the picture above. 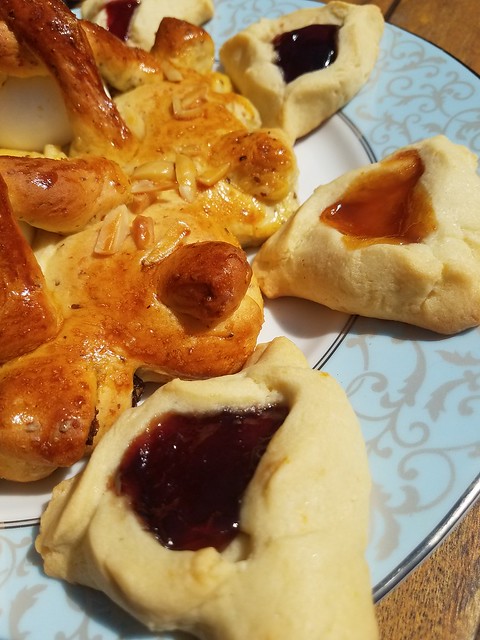 So let's see.  I pretty much knew this race was going to be a mistake almost as soon as I registered.  It sounded like a good idea for about 10 minutes, you know, just long enough to sign up.  The price was good, the location sounded nice, and the timing gave me just enough time to be undertrained.

And then after signing up I realized I had signed up for a trail half marathon.

Don't get me wrong, I very much enjoy trail running.  But trail races?  That's a different beast.
See I've got 2 issues, 1- Trail anxiety where I'm convinced I'm going to get lost and eaten by a mountain lion/abducted and killed/bitten by a snake, and 2- not being the speediest of runners.  If I only suffered from one of those issues a trail race would be great, but instead I spend the time worried because I'm so far behind the runner ahead of me.  And I was going to have 13 miles of this!

So I figured I was just going to take it easy, not run for time (because goodness knows there's no way I was going to be beating any of my records on a trail half marathon) and enjoy the scenery.  Besides, 13 miles is 13 miles and I need as many of those as I can get.

The race was supposed to be in February but with all the rains, the trails had flooded and were in no state for running, so it got pushed to March, to yesterday.

I haven't been as nervous before a race since my very first half marathon. 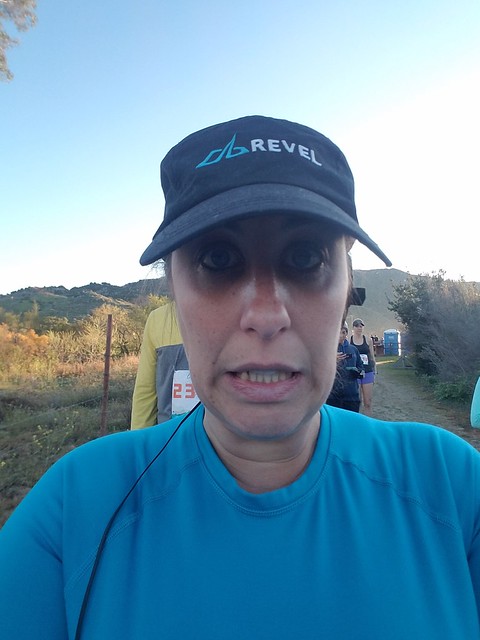 Once the race started, my anxiety lessened a little as we all filed single-file through the brush.  As we got enough room to start passing, I noticed that the woman in front of me was pretty much staying just a few footsteps in front of me, so I didn't need to worry about running alone or getting lost.

After the first mile though, I overtook her, which was also okay, because I knew there would be someone not so far behind me.  And then I started really enjoying the race.

Around mile 2 there was a bridge.  I love bridges. 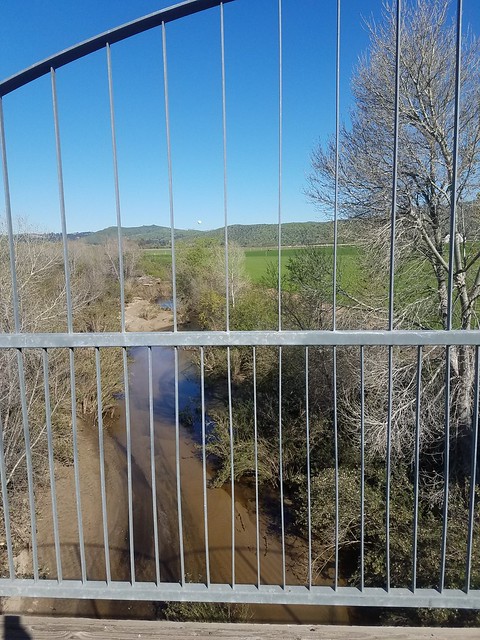 The gates to Bandy Canyon Ranch are always so impressive. 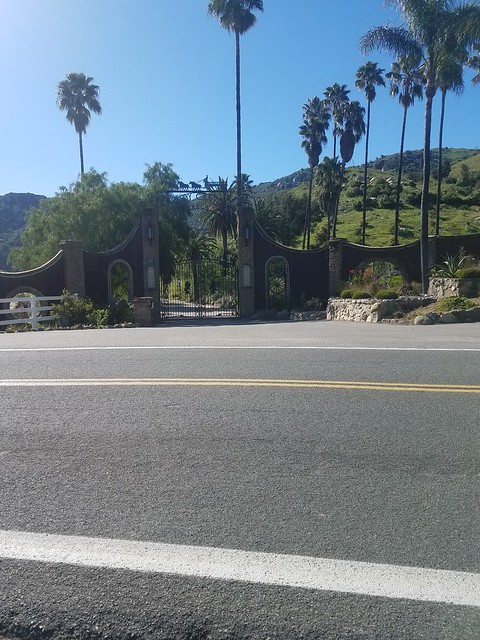 Around mile 5, we started the climb up Raptor Ridge.  Which meant it was the perfect time for me to slow down and take some photo breaks. 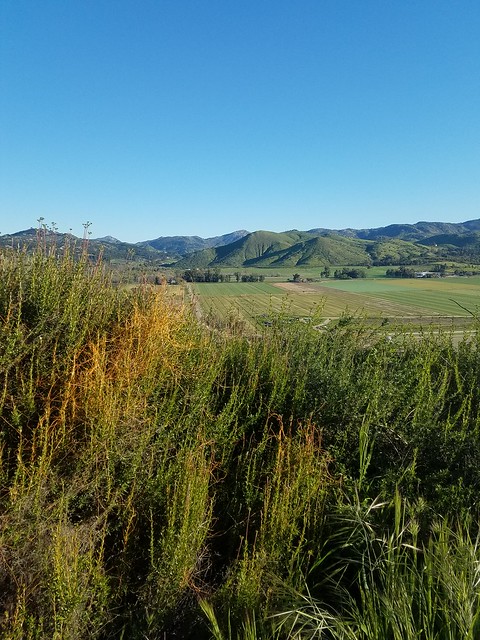 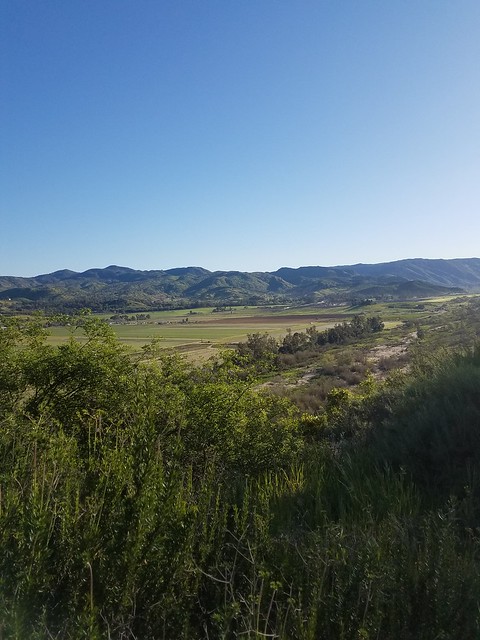 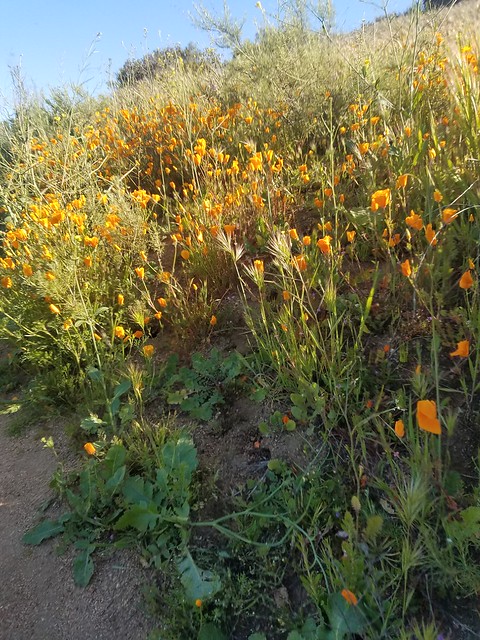 Once I got to the top of Raptor Ridge, it was all downhill for next mile and a half, until the turnaround point.  And then I got to turn around and run the whole thing backwards.  Which is where things started to fall apart.   The climb up Raptor Ridge on either side is 400 ft. and doing it once was fine, but my legs were just exhausted after doing it twice.  All the energy I had for the first half was completely missing once I hit the top of Raptor Ridge the second time.  I did fine running back down, but those last 4 miles in the sun were painful - physically and mentally.

I was super excited to see the finish line, collect my medal, and collect myself. 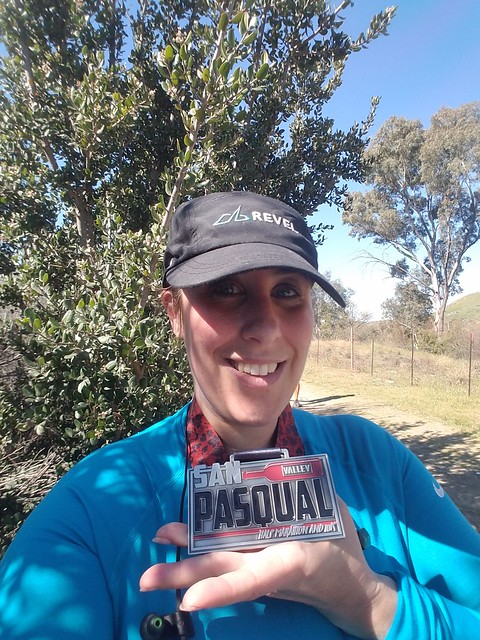 As with all half marathons, I felt fine once I stopped running.  I grabbed a beer and a couple of Sunny D's to rehydrate and was joking and laughing with a runner I had met on the trail as we walked back to our cars. 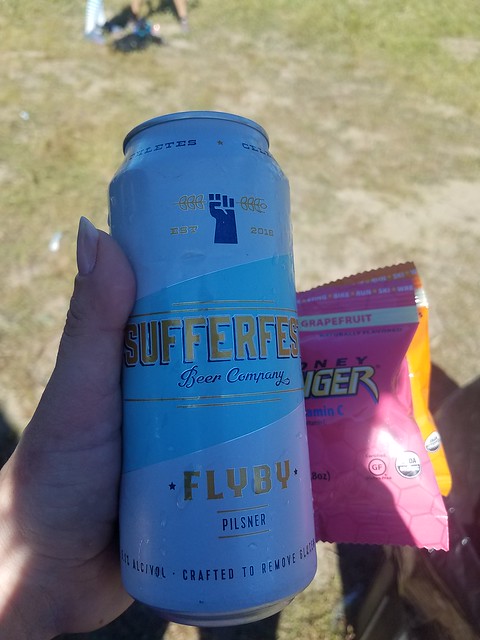 And that my friends is the tale of my first AND last trail half marathon! 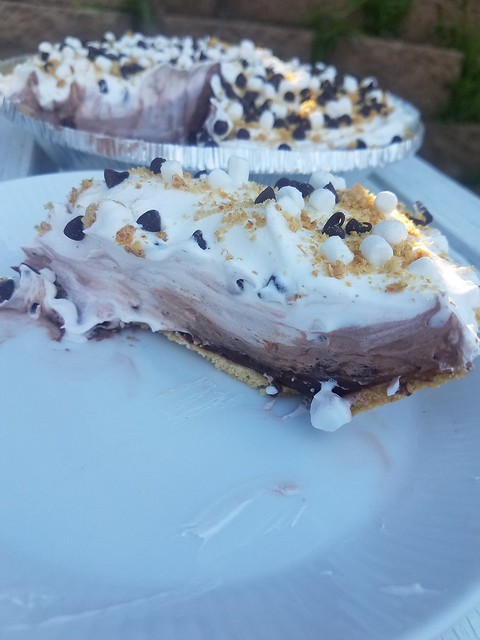 Tomorrow is March 14.  3/14.  3.14.  Otherwise known as "Pi Day."  A day in which we celebrate the ratio of the circumference of a circle to its diameter by eating a homophone.  And that my friends is probably the nerdiest sentence you will ever read in this blog.

But back to Pi/Pie day.  Every year it sneaks up on me.  I wake up, realize through social media that it is indeed the 14th of March, and scramble to find a pie at a market or bakery.  And they told you to beware the IDES of March.  Ha!

But this year I was ahead of the game.  Ahead enough that I have got a pie in the refrigerator right now, just chilling and getting ready for tomorrow.   Although, I realized that I might forget the date because this is SUCH a busy week in this household.  I'm also simultaneously prepping for St. Patrick's Day, Thatmom's birthday, and Purim.  And a trip.  And a couple of work deadlines. 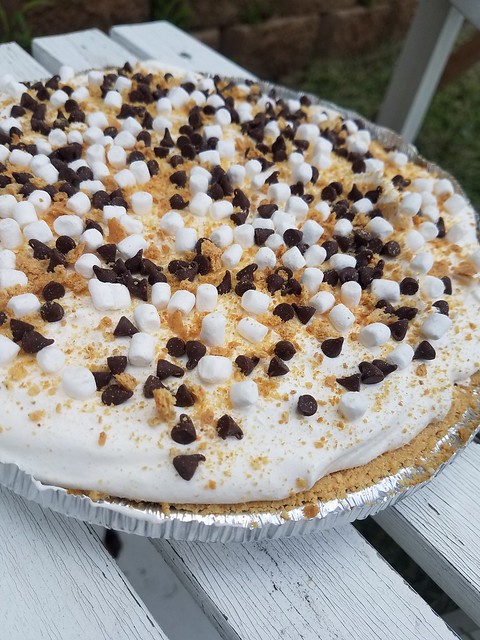 So I may have cheated a little.  I went for the easiest pie I could think of.  A no bake pudding pie.  With a graham cracker crust, so I didn't even have to mess with dough.   But as I was making it, I kept thinking about chocolate and graham cracker and realized I had a bunch of mini marshmallow bites in the pantry leftover from groundhog's day that would turn this simple pudding pie into a smores pie!  Throw on some chocolate chips and graham cracker crumbs for good measure and it still is the easiest pie ever, but dressed up in it's Pi Day best. 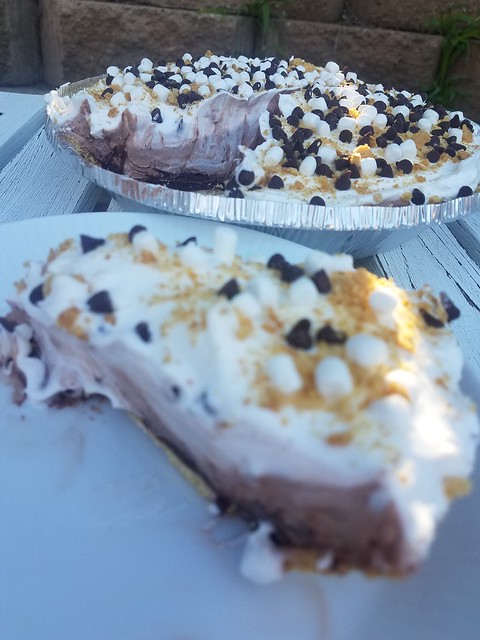 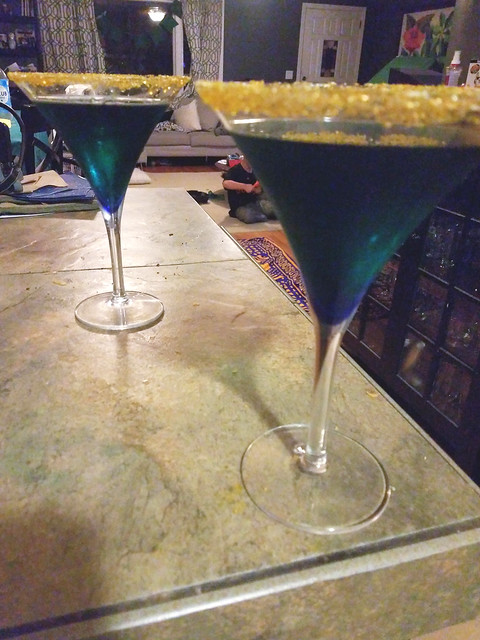 Because my life isn't busy enough, I picked up a couple new side-gigs.  Neither of which pays in the traditional sense, but both offer some great perks.

The first of these is volunteering for Broadway San Diego.  It's volunteer work, but it means I get to help out at amazingly cool events.  Like the announcement of next year's season, where Alyssa Fox wowed our luncheon by singing Let It Go.  In a private room of a restaurant.  Like less than 10 feet away from us!

I got a chance to chat with the volunteer coordinator, and when I told him how I was raising two little theater nerds, he insisted we had to see Aladdin.  Which was opening the following week.

Normally, this is the kind of thing to which I bring Thatkid.  Thatbaby hasn't actually ever sat through a full length production in a theater, as opposed to an outdoor ampitheater where I can scuttle him to the grass if he got rambunctious.  But, he has been phenomenal in those settings, and never actually needed to be removed from the production.  So it was time.  And Aladdin is the perfect show for little guys. 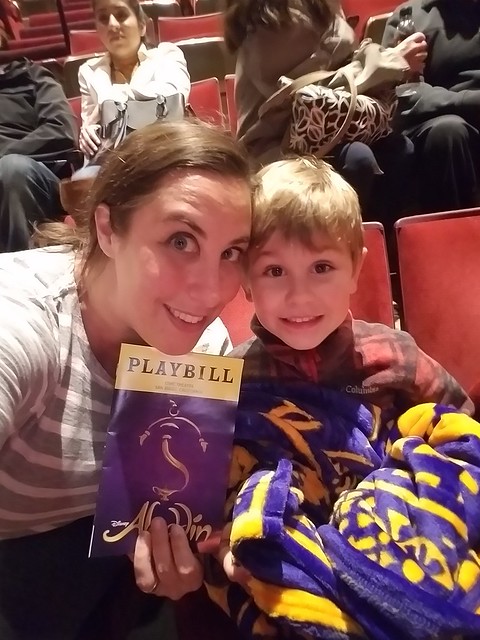 He was a little nervous at first that the bad guy was going to be scary, but before the show we purchased a special magic carpet blanket (which he now brings with him everywhere) that he could hide under if he got scared.  The musical is a little different from the movie though, which really toned down the "bad guy" aspect.

Thatbaby loved the magic of it all, especially the Genie.  The Genie was his hands down favorite part of the show.  And really, I can't blame him.  Major Attaway, who played the Genie, was mesmerizing.  It's such an incredibly physical part, requiring some remarkably high energy, and from his first entrance, he had the audience eating out of the palm of his hand.  He was so much fun to watch.

So much fun, in fact, that I have created a drink in his honor.  Not just Major Attaway, but all the remarkable actors who have taken on the role, all the way back to the creator: James M. Iglehart.

Of course the drink is blue - to match the Genie's iconic robes, which take the place of the "blue ghost" (as Thatbaby refers to him) from the movie.  But more than that, as the Genie promises in the first song, it will "take you away to a faraway place." 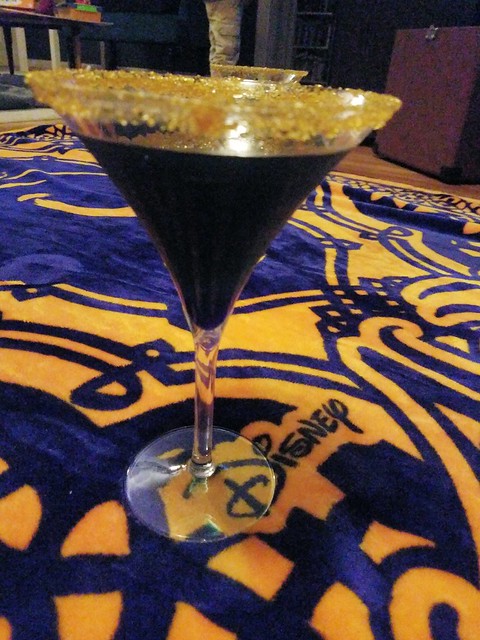