Let's take the first canyon out of here 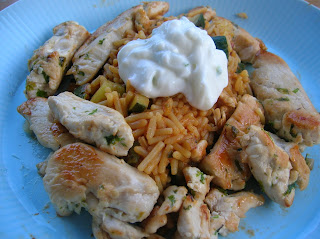 Today was one of my longest days ever, and it shows no signs of ending within the next few hours. Days like this make me want to get in the car and just drive. But then the practical part of me says "Ah yes, and when you eventually run out of gas, how do you intend to pay for it? And who will pay your loans and bills while you're off trying to run out of road?" So I sigh and put my nose back to the grindstone. But I do get a temporary reprieve after making 2 hours of evidentiary photocopies, I get to go home just in time to kiss Thatboy goodnight, and then it's just dinner for one.

Dinner for one usually involves leftovers - like that leftover Spanish rice on the middle shelf, and that "about to go bad" zucchini, the almost wilted cilantro, and of course that defrosted chicken breast that I took out this morning assuming that I would be home human time. Hmmm sounds like another chicken on the stovetop recipe for me! 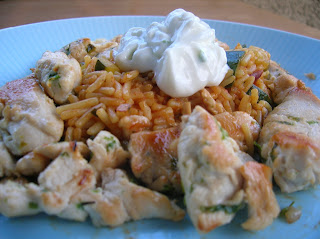 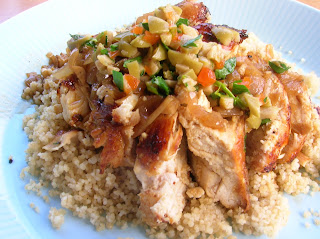 and also shaken! We've got it all here in California: traffic, fires, mudslides, floods, and of course, earthquakes. I'm fortunate enough not to have been in California for any of the "big ones" so I look at these just like amusement park rides. I raise my hands, scream "wheeeeee!" and when it's over I start chanting "again! again!"

Yesterday the earthquake definitely matched the tenor of my life right now, everything's all shook up and out of place for a change. I should probably just make my self right at home in chaos since I seem to continually end up there anyway. And besides, chaos is kinda a pretty place when you look around. I mean, it has basically everything you could possibly want, you just can't necessarily find it.

Lina is someone I wish I had met back when I was living in Orange County because I think she's amazing. She makes amazing dishes and travels to amazing places. Thatboy has NO idea how many blogs I read, or that I read blogs of people I've never met, however he knows Lina because I'm constantly wishing she'd give me cooking lessons!

I'm giving this award to five other yummy bloggers.

Now, does everyone remember Spanish Shrimp? Well I decided to make Spanish Chicken! That means the main ingredient after chicken is, wait for it, OLIVES! I did another skillet chicken, because it's easy, and if it ain't broke... I also served this over a bed of couscous because it's one of my all time favorite grains. If you haven't ever tried it I urge you to put aside whatever cracked up notion you have and make yourself some. I love the whole wheat version from Trader Joes - but I'll take it anyway I can. 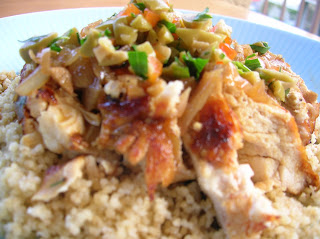 Spanish Skillet Chicken
Serves 2.
Including couscous, each serving has:
Posted by That Girl at 9:55 PM 11 comments: 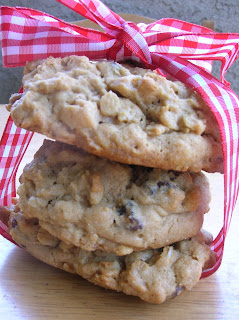 You know something is good when even the dog can't resist it. I love Thatdog to bits, but he is a very unusual dog. First, he hardly ever barks. We love this. In fact, if it wasn't for a visit with his bark-happy Aunt, he'd probably never have picked it up. Second, he's not a chowhound...for the most part. You can leave you food at his head height and unless you give him the go ahead, he'll completely ignore it. Now, he does like to cuddle up REALLY close to you while you eat it, and check your mouth after for crumbs - but once I gave him a plate of pancakes and he looked at me like "what am I supposed to do with this?"

All this changed last week. I wanted to make Thatboy and I a breakfast on the run. Something we could easily take with us in the car on the way to work, surfing, or the beach. I wanted something high in protein, low in calories, and loaded with good stuff. So I took an oatmeal cookie recipe and manipulated it to create some breakfast bars - or some insanely oversized cookies.

So I left these out to cool on the counter. Normally things are safe on the counter - Thatdog has no interest in counter surfing. But this time things were different. DH and I went out and when we came back, the rack of bars was on the floor. Or rather, I should say the rack was on the floor. The bars were gone. Do you see the size of these bars???? 6 of them. He ate 6 of them!!!!! Luckily these are made of pretty healthy ingredients. Save the raisins, they could very well be dog treats. Which is what Thatdog tried to explain to Thatboy as Thatboy tried to eat one of the remaining bars. What? You've eaten 6 and you're still hungry? That must be the true complement. 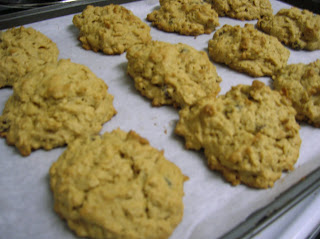 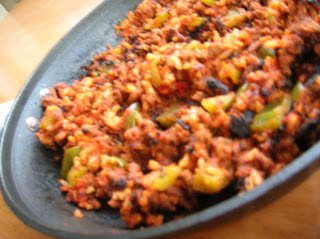 Normally I like to have more than one picture in a post for a number of reasons. First because I like to show off my food. Second, because when you're telling someone about food, reading ingredients hardly gives you a good mental image. Third, because I personally like to know I've done something right, I like to know that the recipe came out the way it was supposed to, I assume others are the same way so I include pictures to show the finished product, and sometimes the product along the way.

Now I readily admit I'm no Annie Leibowitz. Thatboy is the photographer in the family, and if there's one thing I picked up from my parents it's that if one half of the couple excels in something, the other half should support in whatever means possibly. For my parents, that means my mom's the baker and my dad does the cooking. In Thathouse, this means I make the food, Thatboy takes the pictures. And this is where it gets twisty, because I actually take the pictures of my food. Which explains why most of my pictures aren't going to be featured in magazines anytime soon.

That long and windy section up there is my way of apologizing for the singular picture in this entry. I seriously took a hundred and thirty pictures of this dish and none of them were coming out. Well, they were coming out, but badly lit and fuzzy, which is fine if you've been drugged or drinking, but gives you a terrible headache if you haven't.

So I passed the baton to Thatboy who managed to catch that above image before declaring "Enough of this monkey business. Let's eat." (Thatboy gets very hungry and impatient when the smell of ground beef wafts through the apartment.) The good news is, recipes don't get any easier than something you dump into a skillet and cook. So let's oblige our hungry photographer and onward with the recipe!!!!

Italian beef and rice
Serves 2.
Each serving has: