All the world loves a clown 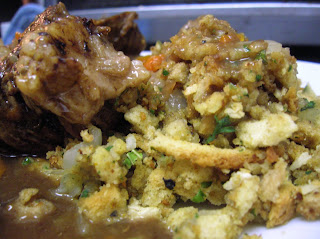 I love playing little tricks on Thatboy, mostly to see if he's paying attention. About 90% of the time he isn't. Which means I probably don't have to play tricks because he's already a step behind me without added tomfoolery (seriously, when's the last time anyone used that word?) One of my favorite easy tricks is to serve leftovers with completely different sides and pretend they're not leftovers, that instead I worked all day creating the menu. This type of trick usually works best in the summer, when Thatboy surfs every night after work, giving me plenty of time to work my shenanigans. Unfortunately, this trick fools him every single time, because, well, he really doesn't pay attention.

In fact, the joke is really on me, since I could probably serve him the exact meal two nights in a row without him realizing it. So maybe the joker here isn't me.....

I whipped up some stovetop stuffing to go with our leftover pot roast. And I'm serious about stovetop, I love that brand. Mostly because I always wanted to be that kid from the commercials who seemed to have the neverending stomach and had stovetop dinners at three different homes. I love stuffing, but I get so full so quickly, stuffing always means a very small dinner for me. 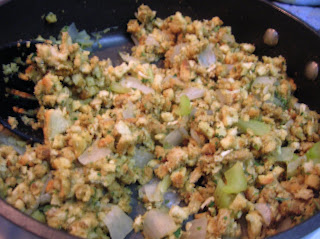 1) Heat oil in skillet over medium high heat. Add onion and celery and cook until veggies are tender.
2) Add chicken broth and bring to a boil.
3) Remove from heat and stir in stuffing.
Posted by That Girl at 9:00 PM