There's an oh such a hungry yearning burning inside of me 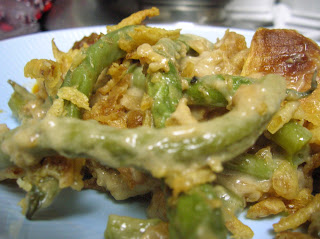 For the creamy part I used skim milk (1/2 cup)
For the mushroomy part I used mushrooms (why yes, I AM a genius - I used about 1/2 an 8 oz pkg, sliced and sauteed)
For the salt I used soy sauce (I also thought this would give it a little more flavor. I was so right. See "I AM a genius" - I used just about a Tablespoon)
For the thickness I just used a little bit of flour (Tablespoon).

The result? It's a little drier than the original recipe, but I kinda liked that. It made the onions crunchier. I think I still want to tweak it a bit, but for right now I like this so much better, and it's definitely lighter!
Posted by That Girl at 9:25 PM