The most important meal of the day 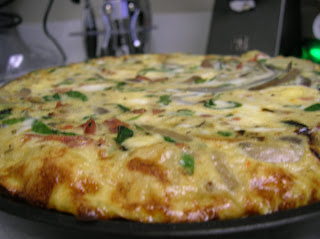 Jon and I don't normally eat breakfast together. During the week I'm out of the house before he's even out of bed. On the weekends he gets up early to surf while I stay in bed. I wanted to start the new year with a nice breakfast for the two of us. What's better than an omlette and less fattening than a quiche? Frittata!

This one is absolutely beautiful. Almost too beautiful to eat. But then the smell gets to you and you have to take a bite, then two, then three, pretty soon you've eaten a quarter of it. It's so good! And filling - perfect for a cold winter morning.

And in light of the new year where everyone is concerned about what they put into their body, I'll even include the nutritional information - I don't guarantee 100% accuracy, but it should give you a pretty good idea. 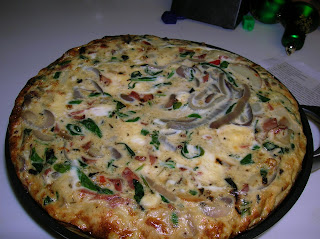