Yesterday morning I attended a "blog party" hosted by the one and only WeezerMonkey (often imitated, never duplicated). The party was attended by many of her faithful readers, most of whom had blogs of their own. 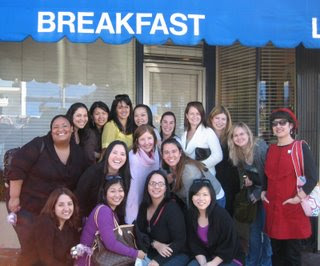 
Having missed WeeMo's first 2 blog parties I felt it was imperative that I make the trek up to LA for this one. As luck would have it, we were in West LA, which is the only LA I really know. I showed up at John O'Groats and there was already a gaggle of women there - so many in fact that we required 2 seatings (which turned into one long L shaped table). The consumate hostess, the Monkey made sure to spend a little time with every side of the table.

I was lucky enough to snag a seat next to the elusive and infamous "Wan" (not her real name - just so there's no confusion.......). Having met Wan for the first time under less than ideal circumstance (read - after multiple glasses of wine) I was anxious to make a better second impression. I was definitely on the right side of the table though, because there was lots of laughing and talking, and surprisinly enough, it wasn't at anyone's expense.

On the advice of Amber (who had to leave early to oogle men in tight pants on tv), I had the pumpkin pancakes which were fantastic. (as promised). I also got to sample some of Aline's tasty Huevos O'Groats. Yum! 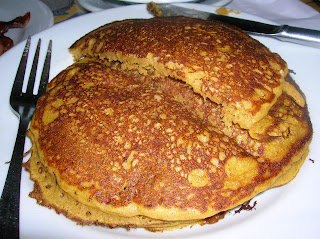 Alyssa brought her polaroid which led to many many good times captured on film, and Nannette brought these yummy little goody bags filled with cookie burgers and mexican wedding cookies. I literally had to fight Jon for the wedding cookies when he stumbled into the kitchen and discovered where I'd hidden them under a napkin (note to self - must find better hiding places.) 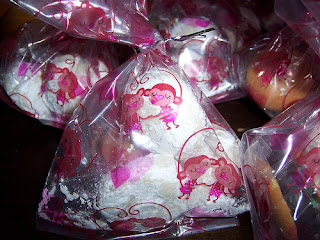 And of course, because I can't ever come unattended, I made cupcakes. Actually, after I stumbled across some adorable mini cupcake liners in Sur La Table I decided to miniaturize them! 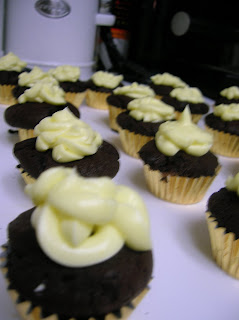 Serves 60.
Each serving has: