Another one from the Gap sales bins! 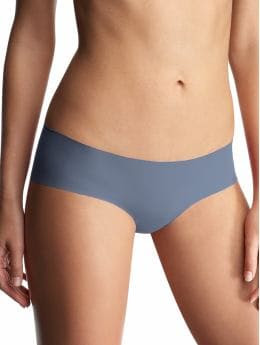 I picked up a couple of ultra low rise cheekys because I thought they'd be great under suits, pants, dresses - They are totally and completely seamless. Probably formed from one piece of material stamped through the world's most technological machine. They were more expensive than the bikinis - a whopping $4.99, but hey, they were made of stretch nylon - which is like astronaut material.

Before putting them on, both Jon and I admired the way the material felt. All smooth and rubbery goodness - soft. However, once I put them on, I quickly realized why they were on sale to begin with. You know how they're seamless? They're also elastic-less. What holds YOUR underwear up? Chances are its an elastic band around the top. Know what happens when the elastic is gone? Your underwear falls down. I spent the remainder of the day tugging and sitting, and praying no one would ask me to go get anything that would require my underwear to pool around my ankles. Notice the model in the picture isn't moving? It's because she's afraid to. One false move and her photo isn't an advertisement as much as it is an "art pic."
Posted by That Girl at 5:02 PM