For a good cause

You may or may not remember that I have a group of friends training for the LA Marathon. I'm reminded of it daily as I hear their complaints about how sore they are from their killer runs. These girls are really working hard. And not just physically - although tomorrow they do have their 14 mile run - that's over half a marathon - but also they're working to raise money.

See, the girls are training with a program called Team in Training which raises money for the Leukemia and Lymphoma Society. Each girl has committed to raising money in order to participate in the training - and fundraising is no easy accomplishment.

So when they decided to host a wine and cheese event to raise money for the cause, how could I say no? Apparently I'm not the only one who thought this:

Some drove from far away places like "Los Angeles" in order to attend: 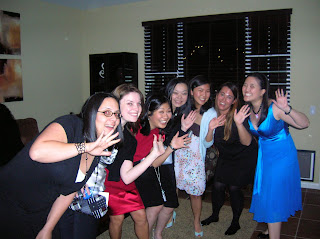 But of course, no one knows how to rock a party like the REAL real wives of Orange County. 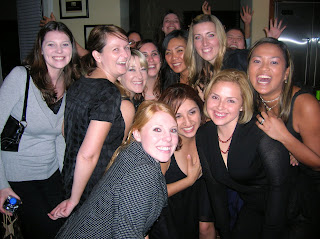 I don't want you to get the wrong impression - there were men at this shindig also, however, they are not near as adept as we women folk at being able to find any and every excuse for a photo opportunity.

Of course, Claire and I posed for the requisite "Kate and Claire" picture, before we realized that everyone wants one of those, and therefore we didn't need to stage our own.

Selling "Tickets to the Claire and Kate" show:

After you lay down your money, you'll be treated to this dazzling duo's greatest performances.

Liz was my drinking buddy through the night. And by "drinking buddy" I do mean "instigator." Having a drinking buddy always ensures loads of pictures that will need explaining the next day by your designated driver. 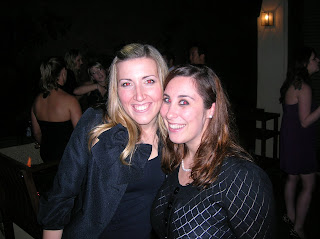 Liz didn't want to be outdone by Claire, so she had a lot of catching up to do in the "pictures with Kate" department. 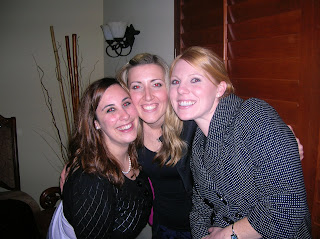 And there were even some pictures with Kate, Liz, AND Claire. 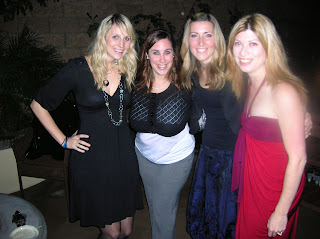 By this time you're probably wondering if we did anything at this party OTHER than take pictures. Well we did! First there was the food. Unfortunately, by the time "eating time" came around, I was already 1 1/2 glasses in....which meant I was already drunk and therefore didn't really eat anything, but I did hear people praising the food and with all the hard work R put into it, I'm sure it was amazing.

There were also raffles for some really amazing prizes. Unfortunately by this time of the evening I was on my third glass of wine, and if you want to know what that means, scroll back up to the "Kate and Liz" section and take a look at that second picture.

I do know that Jessica did a fantastic job of MCing....is that what its called? She called out the raffle numbers as a pro. If this teaching thing doesn't work out for her, she has a calling as a Bingo announcer for sure. 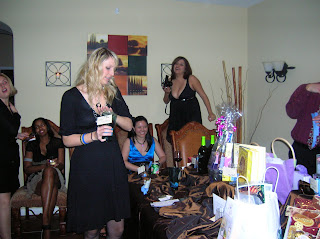 The flower arrangements were so gorgeous, even they became raffle prizes!!!! Check out the goony who won! 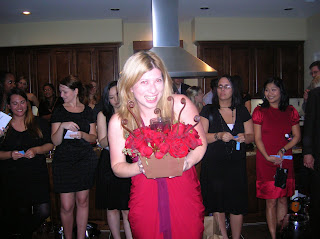 The evening was a fantastic success from the viewpoint of an attendee, I can only hope it was as successful for the amazing women who ran it. Special thanks to C & R for hosting it in their beautiful home, and to Corey for making sure my cup never ranneth dry.
Posted by That Girl at 4:53 PM