Wee-Mo is not going to love this one, I can gaurantee it. While she may never touch the stuff herself, I find thongs to be a necessary evil. The perfect thong is adept at hiding all lines under clothing. However, no underwear is magic and the power of the thong is easily subdued by wearing clothing that is either too see through, or too tight. If your clothes fall into either of these categories, the solution is not to disregard the thong, but rather to make a wardrobe upgrade that doesn't leave you looking like a call girl or a sausage.

In terms of comfort, the thong can be just as comfortable as regular underwear, you just need to find the right one. First, you want to make sure you have the right size. To large and you have an annoying amount of fabric gathering in the crotch of your pants. To small and, well, you get the picture. Second is the right thong itself. Personally I look for one that doesn't do the 3pm crawl as the day goes on (similar to the 5 o'clock shadow, the 3pm crawl is where the back of the thong continues to investigate its surroundings, growing braver and braver as the day goes on)

That's an awful lot of buildup, but since we are embarking on "thong week" I thought it best to get it out of the way. Thong week begins on a high note. A very high note. I may have found the perfect thong on my first day out. This does leave a little worry though because expectations should start low and build. I'm bound to be disappointed in the next selection. 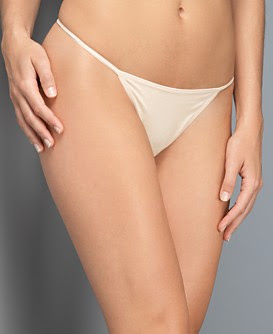 I got a pair of DKNY low rise g-string underwear from Nordstroms. I shelled out the big bucks for these puppies. A whopping $9. And, as time often proves, you get what you pay for. These are phenomenal. At first I was worried, because DKNY was obviously left off the memo about tagless underwear. However, once I put them on it was magic. I loved the fit. No annoying crawl the whole day! And I wore them to the gym! Twice! I hate the phrase "feels like you're not wearing underwear" because frankly I hate the feeling of not wearing underwear. Instead I will describe the feel as "feels like your underwear is an organic part of your clothes."
Posted by That Girl at 2:52 PM