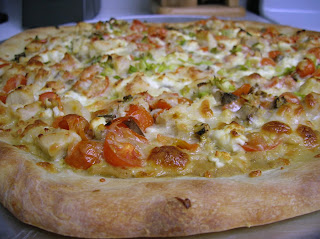 Jon and I rarely order pizza, but when we do, there's always a bit of a topping war. Usually we have to get half of the pizza with one topping that we both like, and half of the pizza with one topping that I don't like (hmmmm anybody else notice I get the raw end of the deal here? Don't feel too bad for me though, because Jon eats about 3 times as much of the pizza as I do). However, there is one topping combo we both agree on - chicken and garlic. It's our "usual" when we order from round table (which is about once every other year...it's in rotation with Papa John's, Rubinos, and our current favorite Bella Roma).

Last week I decided this was a pizza I could make at home. Especially with handy dandy, never fail, Cooking Light by my side. Like most Cooking Light recipes, I didn't have to modify it, except for one little tweak. The recipe calls for a Boboli crust, which we don't buy. Instead I used Trader Joe's Pizza Dough, which we always have on hand in the freezer. In addition to tasting better, it's also healthier! Boboli Pizza Crust has 140 calories, 2.5 grams of fat and 270 mg of sodium in each slice. Trader Joes dough has 120 calories, 1 gram of fat and 240 mg of sodium in each slice. It's not a huge difference, but it is a difference. If you want to try this pizza, which I highly recommend (and you may notice it has feta on it.....seriously, I may be addicted) you can get the recipe here. 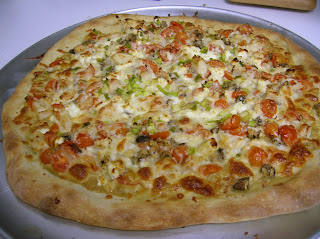