Under the summer moon. 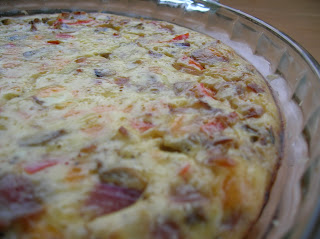 I feel like more and more often we've been doing breakfast for dinner. Mostly because breakfast comes together pretty quickly and it's a lot lighter than your typical dinner foods. Which is perfect for summer. I don't have quite as much desire for breakfast for dinner in the colder months. I've also been favoring quiches as of late, because the leftovers lead themselves to "breakfast for breakfast" for the next few days. It's also a great way to incorporate all the fresh summer produce I can't help and load up on everytime I pass a market. Honestly, I think we have more tomatoes and zucchini than any sane person should.

And we've been doing a lot more dinners outside - which is a change for us. Normally we do dinners in front of the television. I'd blame the Olympics, but really, we've been doing it for longer than most of the Chinese athletes have been alive. But during summer haitus from our favorite shows, and ever since the Olympics have ended, we've taken our meals al fresco. Enjoying the fact that we're not close enough to any still bodies of water to have to worry about West Nile Virus. 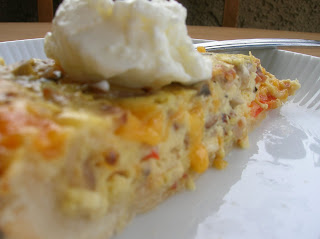 Summer Quiche
Serves 12.
Each serving has: