Out on a quiet spree 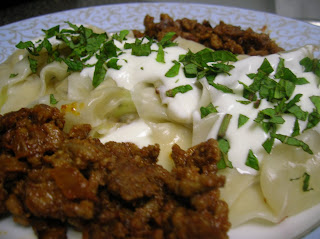 To begin, let me just say that sometimes I take certain things for granted. I kinda assume that everyone's had matzah brei because I grew up with it, and I forget that not everyone is so blessed. I promise to do a much more in depth discussion on matzah brei at another time....think April '09...

Every now and then on a Saturday Thatboy and I will take a foodie adventure. We explore new and different food markets and usually pick up lunch somewhere along the way. Thatboy's favorite is the local Asian market with its fresh (and live) fish that cover the entire back wall. This week I went on an adventure without him, I kinda felt bad, but I promised him the next weekend we're in town we'll head over for him to check it out. But I'm getting ahead of myself, as usual. Let's rewind a bit, shall we?

We're at the stage of Garlic and Sapphires where Reichl has begun the search for self. She begins this search by going through a cooking frenzy. I understand this too well as when I am completely stressed I have marathon baking sessions. As Reichl flips through her recipe files, she finds one for Aushak - scallion dumplings from Afghanistan served with a yogurt sauce and meat sauce. While picking up the ingredients she runs into the King of New York (or at least, that's how I like to think of him). He knows where to find all the best food and he brings her on a foodie tour of the boroughs instigated by his desire for her to have fresh Middle Eastern yogurt for the dish.


I was inspired. I wanted Middle Eastern yogurt! The only problem is, I haven't lived here long enough to know where one is located. Google is a beautiful thing. So I headed to the local Middle Eastern Market and wandered up and down the aisle filled with fragrant spices and fresh nuts, pastries, meats, and giant sacks of rice. I headed for the dairy and picked up yogurt and cheeses - refraining from stacking my cart with halavah, a childhood favorite, but definitely not kind on the waistline.

The aushak itself came together surprisingly easily. The meat sauce simmered while I mixed the yogurt and then it was merely throwing some scallions in wontons and boiling them. And the presentation is gorgeous - don't you think? 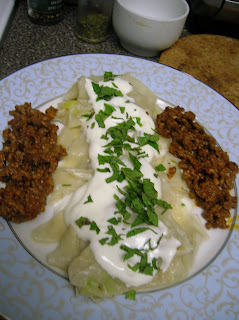 I served it up and Thatboy paused in his Olympic watching long enough to ask me what these were called again. When I told him, he repeated the name over and over again, like a mantra. I told him he was making me nervous. Then I asked why he kept repeating the name and he told me he wanted to make sure he remembered it so he could order it if he ever saw it on a menu. I guess they were a hit! 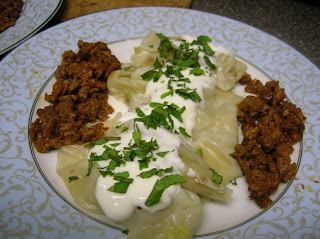 1) Make the meat sauce: Heat oil in small skillet. Add onion and cook for 5 minutes until golden. Add beef, garlic, coriander, and ginger and cook, stirring often, about 3 minutes until meat is no longer red. Add water and cook, stirring often, until reduced by half, about 5 minutes. Add tomato paste, stir, and cook another 5 minutes. Season with salt and pepper and set aside.

2) Make the yogurt sauce: Blend ingredients in a small bowl and set aside.

3) Make the dumplings: Combine ingredients in a small bowl. Lay 1 tsp mixture in center of each wrapper and moisten edge. Fold over and press edges to make semicircles if your wrappers are round, or triangles if square.

4) Heat 3 quarts salted water in a large pot. When boiling, add dumplings and cook for 5 minutes.

5)To Assemble: Spoon 1/4 cup yogurt sauce onto a serving dish and cover with dumplings. Spoon remaining yogurt sauce on top and garnish with chopped fresh mint. Spoon meat sauce all around, and serve at once.

Serves 4.
Each serving has