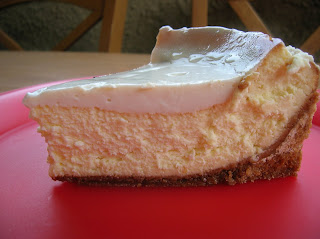 Not so very long ago, Thatboy and I were meeting some friends for dinner. Believing we had arrived early (but that's a story for another time) we ducked into a little bookstore. As I went through the shelves, looking at old books, I came across Garlic and Sapphires by Ruth Reichl. This is a book that was recommended to me by more than one person and so I snatched it up and put it in my "to be read" pile.

Garlic and Sapphires is about Reichl's life as a food critic for the New York Times. In order to review restaurants effectively without getting specialized treatment, Reichl dons crazy costume after crazy character. She begins to review restaurants that don't fit the New York Time's cookie-cutter profile for 4 star restaurants. And because her life revolves around food, Reichl includes recipes instead of pictures. Some of the recipes are inspired by dishes at the restaurant she reviews, others are family favorites, still other reflect a certain mood or feeling.

I decided it wasn't enough for me to simply read the book - I want to cook along. It's kinda like one of those sing along videos I used to watch as a child. There's just nothing like participation! So as I read through the book I'll post the recipes as I make them (well, it'll be off a couple days because stupid blogger didn't want to upload pictures last night)

The first recipe documents Reichl's move from Los Angeles to New York when she took the job. She made something that was quintessential New York - cheesecake. Oooohhhhhhh New York Cheesecake. I have to tell you, even typing those words brings drool to my lips. I was lucky enough to grow up with New York cheesecake on a regular basis - dripping with strawberries. A slice large enough to feed my entire family of four.

Needless to say I was very excited to make this recipe. Perhaps too excited. Perhaps so excited that I misread the directions and put in 1 cup of sugar into the crust instead of 1/4 cup. Let's just say it was a very sweet crust. I also couldn't find gum-less cream cheese, so I used regular cream cheese.

I'll give you the same warning as I gave Thatboy - New York cheesecake is unlike any cheesecake you may find at your local restaurant. It's dense and that denseness is what makes it sooooo rich. This cheesecake captured all the flavor of a New York cheesecake, but wasn't quite as dense - I'm not sure if it was because I overmixed it, or the cream cheese with gum. Even though it wasn't dense, it was amazingly good. Thatboy begrudgingly took a slice since he doesn't like cheesecake. Or at least, he didn't think he liked cheesecake. One bite of this and he turned to me and said "This is really good. This is the best cheesecake I've ever had." 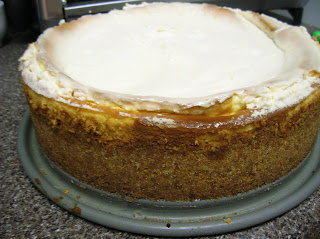 Mix the graham crackers with 1/4 cup sugar and the melted butter and press into bottom and sides of a 9-inch ungreased springform pan. Chill while preparing filling.

Beat the cream cheese, 1/2 cup sugar, eggs, 2 teaspoons of the vanilla, and lemon zest until smooth. Pour into chilled crust and bake 50 minutes to an hour, or until the cheese is set and starting to turn golden in spots. Remove from the oven (leave oven on) and cool for about 15 minutes on a wire rack.

Stir together the sour cream, remaining 1/4 cup sugar, remaining teaspoon of vanilla and spread over cooled cake. Return to oven for 12 minutes until glossy and set.

The recipe "claims" it serves 8, so here's the nutrition info for each "serving" but honestly - if you can eat a whole eighth of this cake, I'd be impressed. Thatboy and I split a piece and that was more than enough for us.