Why should it make a fool of me? 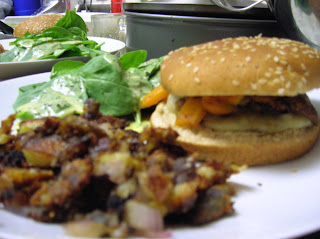 UGH! My first failure. Kind of. Tonight's recipe was hashbrowns, inspired by the ones made at The Palm, which Reichl contends are the best in the world. While the original thought running through my head was "hashbrowns are for breakfast," Reichl's description of them paired beside steak and her son's exclamation that these are better than french fries made me want to use them as a dinner side. I served them up with a burger and salad - right where the french fries would have gone.

Now to be fair, Reichl warns that "Making these remain in a cake is very difficult and requires a fair amount of practice. But they're delicious even when they fall apart, so keep trying." She's dead on the money. I was nearly in tears when my taters wouldn't smash down flat. Insisting on remaining in their cube like state. "They're not done." Thatboy pronounced. I shot him an evil glare - I HATE when he's in the kitchen when I'm cooking. "They're not SUPPOSED to be done," I whined. "The recipe says to cook 'until they are cooked about halfway through.'" Thatboy began using the spatula to break the potatoes into ever smaller and smaller pieces and they still wouldn't flatten. Finally I figured, forget it. The rest of the meal is done, I'll just suck it up and see how they turn out. So I let the bottom brown, plated, flipped - was impressed that the thing actually stayed together....kinda, cooked the other side - was frustrated when it broke to pieces as I tried to gently slide it back in the pan, cut it in half and served as a "pile o'hash browned potatoes." 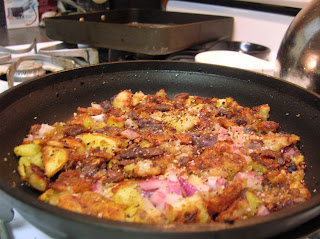 As we sat and ate I turned to Thatboy. "Do you want to know what the most frustrating thing is?" He nodded. Or rolled his eyes. Or attempted to look anywhere but at me in the hopes that I'd think he didn't hear me. "If these were terrible, I could says 'Ha! It wasn't worth the effort. I never have to make these again! But they're SO DAMN GOOD! That means I'm going to have to make them again. I don't know if I can go another 20(something) years without having these hashbrowns again! I'm going to have to do this ALL OVER AGAIN!" Thatboy didn't answer. He was too busy checking to see if there were any leftovers in the pan. 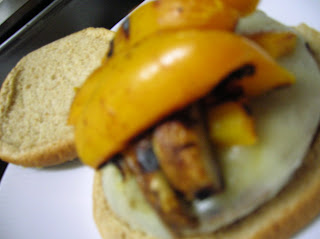 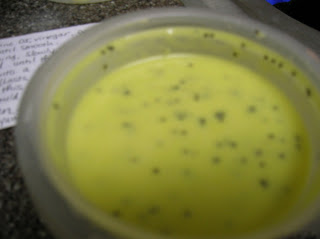 "World's Best Salad Dressing: Poppyseed Vinaigrette"
This is a recipe that was given to me by my friend The Economist. I've had it tucked away for ages, but she swears by it (obviously, as you can see by the name of the recipe). She uses it on salads and as a marinade. Thatboy loved it even though he claims he doesn't like citrus. He liked that it was light like a vinaigrette, and yet still creamy. 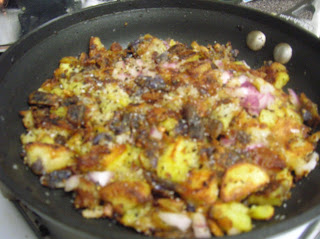 Hash Browns
And here they are in all their glory. The gorgeous color is because I used Trader Joe's package of tri-colored potatoes, I especially love the purple ones! Good luck and Godspeed.

Bring a saucepan of water to a boil, add the potatoes, and boil about 10 minutes, or until they are cooked about halfway through. Drain, and allow them to cool to warm; then peel and chop into about 1-inch squares.

Melt the butter over medium heat in a well-seasoned 8-to 10-inch cast-iron skillet. Remove about a quarter of the butter and set aside. Add the potatoes to the skillet, forming them into a flat cake and pressing down on it with a spatula. Cook, uncovered, over medium heat for about 6 minutes, until a good crust has formed on the bottom. Keep pressing with the spatula, and run it around the edges a bit so the potatoes don't stick.

Scatter the diced onions over the top, along with a good shake of salt and a good grinding of pepper. Remove the skillet from the heat and cover with a large plate; leave for 2 minutes, allowing the potatoes to steam. Using oven mitts, hold the plate and skillet together, and invert together, so the potatoes drop onto the plate.

Put the skillet back over medium heat and add the remaining melted butter. Carefully slide the entire potato cake into the skillet, trying not to break it. Add more salt and pepper, turn the heat up to medium high, and brown the potatoes for another 5 minutes, until a crust forms.

Slide the potato cake onto a hot platter, sprinkle with the coarse sea salt, and serve immediately.