I can hear a lark somewhere

Okay, I'll admit it. I cheated. The next recipe in the Garlic and Sapphires is Moules Marinieres (for those of you that don't speak French, Moules = mussels). Now here comes the big problem....I don't eat mussels. Although Thatparents will swear up and down that I am not not not allergic to mussels, I'll stick out my chin and insist that they force my throat to close up. I can remember the incident very clearly, and remember being very scared that I was going to die. So I don't take my chances.

However, the night I was to make this recipe, we already had plans to go out anyway so perhaps it was all for the best. In fact, the kind eye of someone was looking down because purely my coincidence, the restaurant we went is known for it's mussel bisque. I asked Thatboy if he'd be interested in ordering it, you know, for research sake, and he was more than happy to oblige. 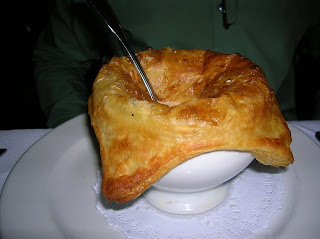 This is after our beyond wonderful fantastic waiter who I am naming my first child after pierced it for Thatboy (he must have known Thatboy would hurt himself or make a mess). Thatboy adored the soup. You know how I'm the one that usually makes noises while eating? Well this time it was Thatboy. He can't wait to return to the restaurant just to have another bowl! 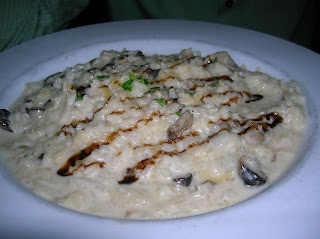 And just a note, after my success earlier this week with risotto, Thatboy felt inspired to order some. He stated very matter of factly that this was not nearly as good as the one I had made. Score 1 Reichl!

Alrighty, so obviously there wasn't a lot of cooking going on in Thathouse that night. In fact, the only time I entered the kitchen was to open a bottle of Korbel Rouge. And even I didn't open that, Thatboy did (I have a fear of opening champagne bottles). But I felt that I just couldn't leave you high and dry without any recipes, so I went back into the vault of unpublished recipes and found my ham experiment. Back when I was craving ham I bought a 3 pounder, cut it up, and with each pound created a different glaze. (Not all in one night - I'm eccentric, but not crazy). So without futher ado - Ham, 3 ways. 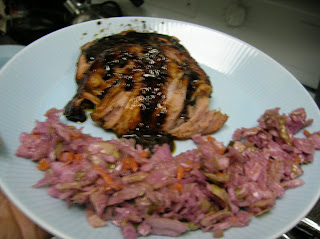 Glaze 1
I was inspired by the root beer pork that everyone and their mother makes, but I don't like root beer. Instead I used Pepsi to create a sweet dark glaze. And in case reducing pepsi to syrup form isn't sweet enough, I added brown sugar (mostly because this is the first time I've made ham and I thought brown sugar was a necessary ingredient) Well this is a good idea that really didn't pan out well. Basically it became black tar. It stuck to everything and thank goodness I don't have fillings in my teeth! 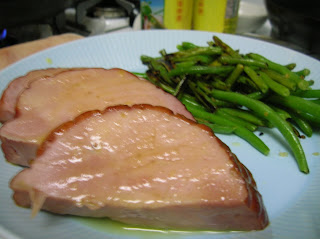 Glaze 2
After the last attempt I scaled it back. Waaaaay back. Apparently complicated glazes just don't work for me. Orange honey however? That I can do. This was Thatboy's favorite. 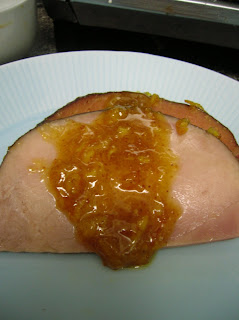 Glaze 3
As I said, Thatboy really liked the last one, but it was a little ehh for me. That's what you get when you mix together 2 ingredients. So I used that as a base and added a little bit of mustard for kick (but honey mustard to keep the sweetness from the last recipe) and some marmalade to amp up the orange flavor Thatboy liked in the last recipe. This one was my favorite.
Posted by That Girl at 10:33 PM