All I want is you! 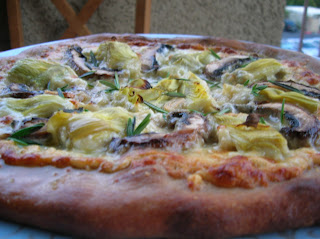 Oh Homegrown Gourmet, I came so close to missing the deadline this month. Which would have been a travesty because you are one of my all time favorite blogging events. It would have been especially tragic because this month the theme is pizza - PIZZA!

A brief history of Pizza: 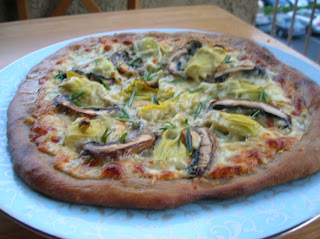 So it was very easy for me to join in this homegrown gourmet because all I had to do was make a small pizza topped with my favorite things! We went sauceless, because really in my opinion sauce isn't really a pizza necessity. Especially when the pizza is loaded with cheese. Four cheeses to be exact. And not your boring old Romano/Parm/Mozzarella mix - instead I used Fontinella, Parm, Mozzarella, and gorgonzola. I love gorgonzola on my pizza. Gorgonzola and pear - yum! (wow I have definitely been in California too long). I have my favorite cheese store to pick up fresh cheese and I highly recommend you find yourself a favorite. And make friends with the owner, you won't regret it. Thatboy loves garlic on his pizza so I cut up a couple cloves and threw those on too. And we both go ga ga for artichoke on our pizza. For a final "neiner neiner" (technical cooking term) I pulled out the baby bella mushrooms, sliced them and added them too. Totally gourmet, totally California, dude. 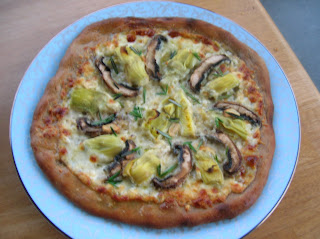 Four Cheese Pizza with Portobello Mushrooms and Artichokes
Serves 2.
Each serving has:
Posted by That Girl at 7:47 PM