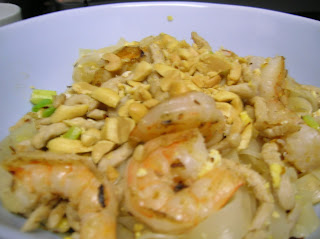 I can tell you the very first time I had Thai food. It was in college at what soon became Thatboy and my favorite date restaurant. I fell truly, madly, deeply in love with pad thai. Now I didn't just settle with Pad Thai right off the bat, even though I loved it, I ate almost everything off that menu - just to be sure. But I had my favorite. And I kept coming back to it. And now my true test of a Thai restaurant is their Pad Thai. I've had good pad thai, bad pad thai and pad thai that makes you call your mother to tell her that you have found the food of your dreams.

I can tell you the first time I have ever made Thai food. It was the summer of 2007 and it was spicy basil tofu. It was good, but no pad thai. Then I made pad thai later that summer. It was okay, but I certainly wasn't going to open up a Thai restaurant any time soon based on that attempt.

I was very excited that the next recipe in Garlic and Sapphires was for Thai food. Well, sort of Thai food. Reichl calls this her Americanized version of Thai food, and based on the taste, she's right. It lacks a lot of the complexity of flavors and spices found in the actual stuff. However, for an easy weeknight meal - it'll do. And if you've never had Thai food before, this is as good an introduction as any.

I was heavy handed with the red pepper flakes (I usually am) so this was nice and spicy. And a word of warning about those rice noodles. They're kind of a pain in the butt to work with (even though very tasty). I'm not really a fan, but it might have been the brand I used. They're very sticky and mixing them in with the ingredients doesn't work all that well. Use tongs if you've got them (and if you don't - well, you really should get some. You can thank me later) And for those of you who are super observant, you'll notice I didn't use thin rice noodles she calls for, because I already had these thick ones in the cupboard. Yes, that's right. I keep rice noodles in my cupboard. Along with Udon noodles, soba noodles, and somen noodles. 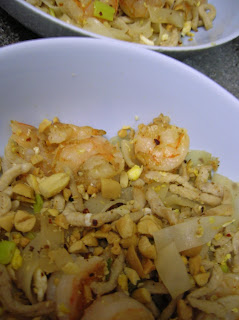 1. Soak the noodles in hot water to cover for 20 minutes, until soft. Drain and set aside.
2. Mix the sugar, fish sauce and vinegar together and set aside.
3. Heat oil in wok till smoking. Saute the shrimp just until they start to change color, about 1 minute. Remove from the wok and set aside.
4. Add garlic, then the pork and half the scallions. Saute just until the pork loses its redness, then add the drained noodles and mix quickly. Add the reserved fish sauce mixture, reduce heat to medium and cook until the noodles have absorbed all the liquid, about 5-8 minutes.
5. Move the noodles to one side and crack one egg into the wok, breaking the yolk. Tilt the wok so you get as thin a sheet of egg as possible, and scramble just until set. Then mix the egg into the noodles. Repeat with the second egg.
6. Add the shrimp, remaining scallions and red pepper flakes and mix thoroughly. Add the lime juice and cook, stirring for another minute.
7. Transfer noodles to a serving plate or individual bowls, sprinkle with some of the peanuts. Serve with lime wedges, remaining peanuts and chili sauce.