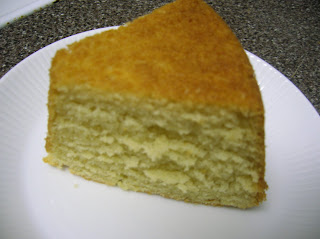 Today is a very special day. Not only is it Friday, but it's also Erika's birthday! Erika's birthday falls on the best possible day because tonight's Garlic and Sapphires recipe is.....CAKE! So I'm sending Erika a virtual slice of cake and many many well wishes.

I think if Erika had her say, she'd probably want a fancier cake than this simple vanilla one. In fact, I happen to know that even though she's sick as a dog, she's making herself a lah-ti-dah Italian rum cake to celebrate. Well you know what Erika? Be happy with your vanilla cake. If you had been born a day earlier we'd be celebrating by sticking a candle in a scallion dumpling.

Reichl makes this cake with her son and his friends. I'm willing to bet that her kitchen was as equally covered in flour as mine was - however, I don't have the excuse of three 8 year olds helping me cook. I'm going to start recruiting kids to come over so I have an excuse for all the batter that inevitably ends up in my hair.

As I said, this isn't a fancy cake - Thatboy was disappointed in the lack of frosting - but it was so easy I made it on a weeknight...and I never bake on weeknights. There's something so simple and sweet about this cake. It's not overly sweet, leaving your mouth sticky - instead, it leaves a faint trace of sugar in the mouth, and the sweet aroma of vanilla in the air. I brought the cake into work where it made a welcomed breakfast for many, and a mid afternoon snack for others. The texture isn't light, but neither is it dense. Instead it rests in that middle "cakey" ground - which is an apt texture for a cake!

So Happy Birthday Erika! Enjoy your not too sweet, not too dense simple vanilla cake. And feel better soon!!!!! 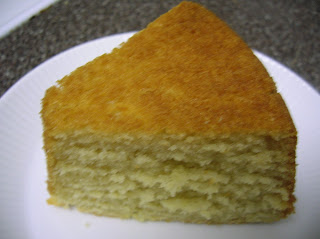