Dawn on the mountain 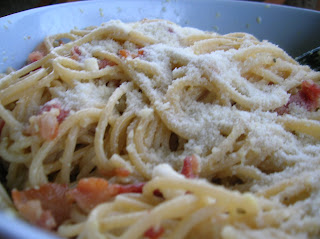 It's hard to believe this afternoon we were cruising down the side of a mountain. I love car trips with Thatboy because it gives us time to have really deep conversations.

TG: So, have you ever had spaghetti carbonara before?
TB: I don't think so.
TG: Okay, so I need you to make a deal with me. Tonight, when we get home, and I start making dinner. You CANNOT come into the kitchen until it's all done.

I had good reason to make that deal with Thatboy. You see, spaghetti carbonara is made with raw egg. According to Reichl, the heat of the noodles will cook the egg and create the sauce for the noodles....well along with the gallons of bacon fat involved. But the sticky part of the recipe is the raw egg. I just knew that if Thatboy came wandering into the kitchen at the wrong time, and saw me dumping noodles into raw egg that dinner would be over, right then and there. Frankly, I was a little nervous about the entire endeavor - but Reichl hasn't steered me wrong yet. Plus, this recipe seemed just perfect for tonight since we're both tired from early morning hikes, late nights in the hot tub, and something quick and easy seemed like a gift from, well Ruth!

Reichl describes this as her "perfect last minute dinner" and like "bacon and eggs, with pasta instead of toast." Both very apt descriptions. For some reason I started talking to myself while making this dinner. Not in some sort of cute "thinks she's on food network" kind of way, but in an insane "Swedish chef" sort of way. When the bacon began to fry I called out "I hear the fat rendering!" (Not sure who I was talking to since, Thatboy was about 10 feet away and I was hovering over the hot skillet). When the edges of the bacon began to brown I murmured "Ruthie, Ruthie, Ruthie, you've done it again." And when it was time to add the noodles to the egg I started making so may nervous/excited yips and squeals and giggles that Thatboy called out to make sure I hadn't accidentally left my marbles on the side of the mountain.

With great trepidation I placed the dish in front of Thatboy and waited for him to take a bite. "It's good. Now why couldn't I come into the kitchen?" I confessed the ingredients to him and my fear and he broke into a smile. "I'm not as weird about egg as you are." I gave him an incredulous look since he's the same guy who refuses to drink milk 3 days prior to his "sell by" date because it's obviously expired. I then confessed that there was probably enough bacon fat in this to choke a horse and he nodded. "Yeah, it's a shame that food that tastes so good is usually bad for you." He's so smart, isn't he? In actuality, I used whole wheat spaghetti, so this could have been a whole lot worse, and I used a little less than a pound because the box holds 14.5 oz. The recipe says it serves 3, so I'm using that to determine the nutritional info - but we each had a full bowl and there was definitely at least 2 bowls left over, so keep that in mind! 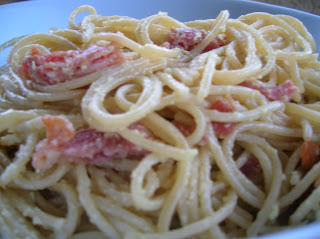 1/2 cup grated Parmigiano cheese, plus extra for the table

1. Cut the bacon crosswise into pieces 1/2 inch wide. Put them in the skillet and cook for about 2 minutes until the fat begins to render. Add the whole cloves of garlic and cook about another 5 minutes, until the edges of the bacon just begin to get crisp. Do not get too crisp, otherwise they will not meld with the pasta.

2. Beat the eggs in the serving bowl, and add pepper.

3. Remove the garlic from the pan. If it looks like too much fat to you, discard some, but you're going to toss the bacon with most of its fat into the the pasta. (I am only telling you what Ruth says. I myself would dispense with the bacon fat.)

4. When it is cooked, drain the pasta and immediately throw it into the beaten eggs. Mix thoroughly. The heat of the spaghetti cooks the eggs and turns them into a sauce. Add the bacon with its fat and toss again. Add cheese and serve.