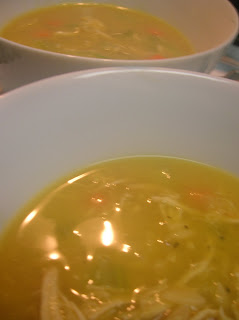 In August it will be so hot
I will become a cooking pot
Cooking soup of course-why not?
Cooking once, cooking twice
Cooking chicken soup with rice

Here's my secret - whenever I make homemade chicken soup, I sing that song as I stir, except I do the whole song, not just August. Mostly that's because for the past year I've made chicken soup with orzo, and while it's not rice - the shape is far more ricelike than chicken noodle soup. I love chicken soup with orzo because it's right between rice and noodle. The little pastas just slip from the spoon down your throat without that long slurpy noodle. And yet, it's a little softer than rice.

I was inspired by Amber for this because this winter I started making chicken soup with homemade stock. However, the day I made this, I had decided at lunch that I wanted, no NEEDED chicken soup for dinner and had no chicken stock on hand. I had made one of Amber's soups earlier this year that just used chicken broth for the broth portion of soup and it was one of the quickest soups I've ever made. So I decided I could use the same process for this chicken soup. It was quick, it was easy, it was delicious. 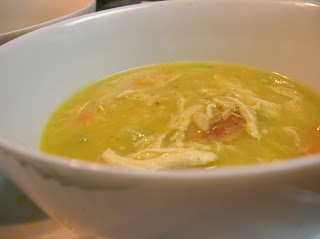 Quickest Chicken Soup with Orzo
Serves 2.
Each serving has: