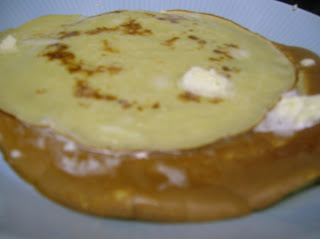 Actually, Thatboy gave me quite the different compliment last night as we headed to a concert. After I made a certain comment about my planned activites for the night, he looked at me and exclaimed "My wife's a G!" For those of you who aren't in the know...G is short for gangsta...which is short for gangster. I'm pretty sure he meant I was sensational though, right? Of course, it could have been the obscene amounts of energy drinks we've been consuming this week talking. We've basically been surviving off of breakfast, energy drinks, and a constant high of summer music and good friends. Who needs sleep?

Although, I have definitely been making more substantial breakfasts this week so we don't "wake up in the hospital" (thanks Thatmom - I promise we'll start taking care of ourselves soon....) We continue with our week of French inspired with French pancakes! I actually woke up slightly before dawn to make these because Thatboy had to go to a neighboring county for work so he had to leave slightly after dawn. The recipe comes from one of Thatmom's friends who gave it to me shortly before our wedding. I'm guessing she must have heard about the ultimate pancake quest. The recipe actually calls for filling the pancakes with fruit, jam, and/or nuts, but I thought the recipe would make the kind of pancakes Thatboy likes so I kept it simple. Unfortunately because of his schedule I didn't get a chance to take a picture of Thatboy's pancakes, drowning in syrup, so you'll have to make do with my syrupless version. These were as thin and gooey as Thatboy liked them, but he found them a little stiff. I think I could play around with them a little to get them closer to his favorites fairly easily.


And for anyone who's wondering - I went back to sleep RIGHT after he left. 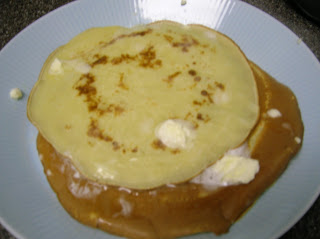