Moon shining up above 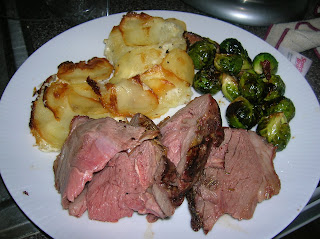 I was standing in line at the supermarket waiting to pay for the ingredients for dinner, when I heard a funny cluck and sigh behind me. I turned to look at the man behind me who was studying one of those packages of pre-cooked turkey breast - you know the kind I mean, the ones we all pick up for those last minute dinners, when we're too tired to cook. I think my parents actually survive off of those rotisserie chickens you get at the grocery store or Costco. They're quick, easy, and usually leave leftovers which are great for soups, stocks, and quesadillas.

The man caught my eye, and with a worried look on his brow asked if I thought there was enough to feed 4 adults and 2 children in his turkey breast. Before I could answer he begged that I'd say yes. I reluctantly reassured him, hoping that his family was light eaters, and asked if he was serving anything with the turkey. He sheepishly looked at me as he began unloading the mashed potatoes, bagged salad, and packaged rice from his cart. He quickly began moaning that this wasn't like him - he was the chef of the family, he barbequed every night, but his stepdaughter had shown up with her boyfriend unexpectedly and there just wasn't time to cook.

My heart went out to him at that moment. I'm not quite sure why we feel the need to defend ourselves, but I understand the feeling only too well. Every time I unload my cart I'm self conscious of what other line-waiters think of my choices. Do I have too much processed foods? Are they judging my decision for frozen veggies instead of fresh? Do my snack choices pass muster? But in reality there is no shame in a packaged dinner, the company is always far more important than the food served, and I reassured the man behind me that sitting down to dinner with his family would be far more enjoyable without him having to slave over a barbeque.

He looked at my purchase and his eyes glazed over. I could feel myself getting read behind the ear as he took in the lamb, potatoes, cream, and brussels sprouts. "Is that what you're having for dinner?" I nodded my head as he asked about the lamb.
"It's insanely easy" I told him, thinking of how Reichl describes cooking lamb - it's equally good rare and well done. "It's not different than roast beef or roast chicken, I just throw it in the oven and let the oven do all the work." Just as he was self conscious about his food choices, I find that I am always quick to defend my own. Everything I make is "easy" or "simple" when asked, I play down the hours I spend in the kitchen or the vigilance of watching to make sure the temperature never rises from simmer to boil. I am as equally worried about being judged as the man behind me, for I feel that sometimes making "Fancy" dinners makes people feel I think I'm somehow better than they are - and since I don't think that's true I am quick to make it seem that these meals are thrown together in the blink of an eye, with little more than a spoon and a prayer.

The last recipes in Garlic and Sapphires come together to form a fancy meal - lamb, scalloped potatoes, and brussels sprouts with chocolate cake for dessert. The lamb and potatoes are cooked at the same time, and the brussels sprouts cook as the lamb and potatoes cool. I prepared the batter for the cake while the meat cooked, and threw it in the oven when the brussels sprouts were done. I started preparing dinner around 7:30 and we finished eating close to 11. It was a long night, and the beautiful purple scar on my right wrist will ever serve as a reminder to wear a pot holder when pressing down on potatoes - actually, if that were true I wouldn't have near as many burn scars on my hands/arms/and wrists. But this was the last meal from the book, and I wanted to go out with a bang. I succeeded. The meat was tender and juicy, the potatoes "tasted like cake" according to Thatboy. He wasn't impressed with the brussels sprout - but he doesn't like them all the much to begin with, and actually prefers my standard sautee to the roasting. I forgot to pick up Grand Mariner, so I subbed in some Chambord with the chocolate cake which was moist, crumbly, and ever so rich. Once again, it was frostingless. I'm noticing a trend with Ms. Reichl. 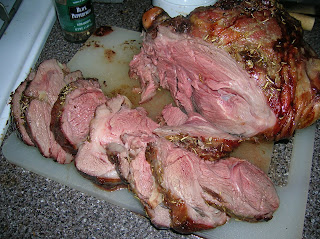 Roasted Leg of Lamb with Garlic and Rosemary 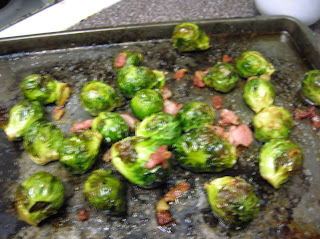 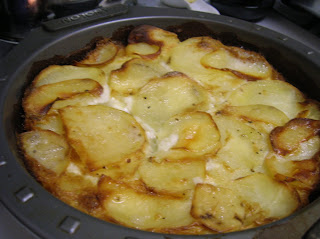 Scalloped Potatoes
Serves 8.
Each serving has: 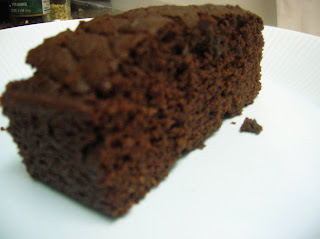