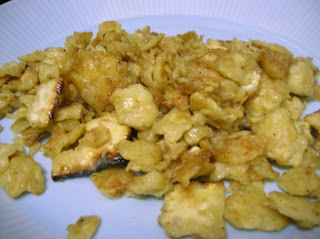 I took Thatboy's face between my hands and forced him to look me in the eye.

TG: I have a very serious question for you.
TB: What is it?
TG: Well, the next recipe in the book is for Matzah Brei. Usually, for me, that's a breakfast food, but she makes it for dinner. Do you want Matzah Brei for breakfast or for dinner?
TB: (kissing me on the forehead) Make it for dinner.

This may seem like a very dramatic way to go about deciding dinner, but unfortunately it is completely necessary in Thathouse these days. You see, I have lost my husband. Not in the physical sense. Physically he is sitting less than a foot from me. But even though his body is present, from the time he enters the apartment until he drags himself to bed Thatboy is completely and utterly absorbed in the Olympics. Not just the games themselves, but news stories about the games, repeats of events, anything and everything Olympics. The house could catch on fire, and he wouldn't notice. Conversations are nonexistant unless they occur in the clipped space of commercials - and those that occur during the breaks are promptly and quickly forgotten. I head off to bed leaving the zombie glued to the screen until the last event of the night fades into a dying ember of light. On the plus side, this makes falling asleep very easy for me. I lie in the middle of the bed spreading out over all of it.

TB: I almost couldn't get into bed last night.
TG: Because of the Olympics?
TB: No, because you were starfishing all over the bed. Your head was on my pillow, your arms across the bed, your legs on my side.
TG: Why didn't you just cuddle me over to my side?
TB: I tried. You wouldn't move. Instead you cuddled me right back.
TG: Awww I'm adorable when I sleep!
TB: Too bad you can't always be sleeping then, isn't it?

Given the fact that we're both always exhausted, breakfast for dinner doesn't sound like such a bad idea! For the uninitiated, Matzah Brei is basically a cross between French toast and scrambled eggs - but made with matzah, unleavened bread. In my family this is a treat only eaten at Passover when leavened bread is a no go. This is one of my dad's specialties and no Passover is complete without him making us all a big family breakfast. Reichl's version of Matzah Brei is different than my secret family recipe. It's very simple. So simple in fact it's her son's favorite food because he can make it himself. In fact, I was tempted to have Thatboy make this - but as I said before if it involves him getting up from the television, it's just not going to happen. 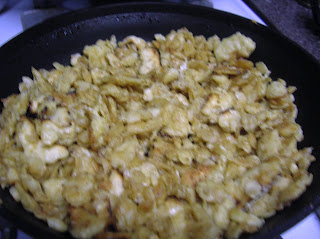 The outcome was different than what I was expecting. Dad's matzah brei is moist and eggy. Reichl's version focuses more on the matzah and is a drier crunchier version. It also uses A LOT more butter than my dad's version. Know how I know? This thing tastes like butter. Buttery butter. And since I was a kid who used to eat butter plain -I was very happy. I don't know that one is better than the other, but it's definitely a good alternative. Especially because it takes all of 5 minutes to make! 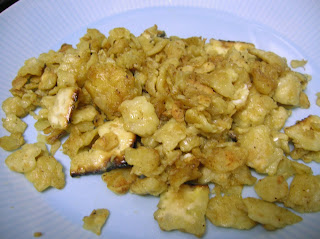 Set a colander inside a bowl (to catch the crumbs) and break the matzos into little pieces, dropping them into the colander.

Remove the colander from the bowl and hold it beneath running water until matzos are damp. Allow them to drain; then put the damp matzos into a bowl.

Break the eggs into the bowl and stir with a fork until mixed. Add salt to taste.

Melt the butter in a small skillet over medium heat. When the foam subsides, add the matzo-egg mixture and cook, stirring constantly, for about 4 minutes, or until the egg is cooked and there are a few crispy little bits.

Put on plates and serve at once.