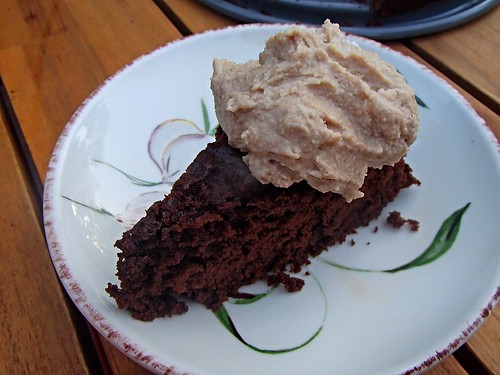 For many, the only experience they will have with chestnuts is the song, where they are roasting over an open fire.   I'm actually lucky in that I have a little more experience than that.  Thatmom is a huge fan of roasted chestnuts, which are always a holiday marker for me.  First in the Thanksgiving stuffing, followed by the roasted variety sold on street corners in New York City.

So for me, chestnuts have always been a savory treat, which make their appearance in cold weather.  But Kim Sunee uses them often in her book.  The introduction was the cinnamon rolls.  A nice intro, because it showed how very sweet chestnuts can be, and makes them an excellent choice for desserts as well as stuffing!

Sunee connects the chestnuts to Corsica, where they are found in abundance.  In Corsica Sunee began feeling comfortable in her own skin, sunbathing and skinny dipping, eating campfire-side.  It makes sense that she pairs this chocolate cake with her time there.  It is at once freeing and indulgent.  The chestnut pairing well with chocolate in the way its brethren nuts do.  If you love nutella, this is a nice change of pace.  The bittersweet chocolate means it's not too sweet.  The mascarpone also serves as a nice change from cream cheese frosting and I would definitely use it again.