What a dfference a year makes

Today marks 2 years since Thatdad's death. Last weekend Thatmom and I were talking about this anniversary. She asked if I had any feelings related to the date. I didn't. I told her that it could have been any day, I didn't tie any significance to February 20.

And then I looked back to my entry related to last year. I was a mess. The entire month of February I was a mess, all the days leading up to the actual anniversary. And I wrote about how grief wasn't linear, and it doesn't get better with time passing.

But to compare my feelings this year, with my feelings from last year, is like reading the thoughts of two entirely different people. It's hard to have perspective when you're knee deep in grief, but being able to look back, you can see the change.

And although Thatmom still has her rough days, I think she has also come a far way from last year too. This year she chose to spend the day alone, at home, which is unusual since she normally wants to be surrounded by family on these harder days. And I know it's been a hard month for her in general. I'm expecting it to be a hard couple of months, given that her birthday and anniversary are next month. February and March are reminders of loss.

But for us, life has returned to near normal. I don't know that it will ever really be "normal" normal, but it has become the new normal. There are still moments I want to settle a debate by asking the only person I know will KNOW the answer. I reach for the phone thinking "Thatdad will know who sings the song" only to remember it doesn't work that way anymore. The past few months have brought a lot of times when I've thought about things Thatdad is missing out on. But in general, I'm able to live a life without him.

We spent the day doing very normal things - breakfast in bed, a trip to the outlets, lunch at a taco shop, and then home for a nap. I know you're jealous of how productive we were. I couldn't even be bothered with a very complicated dinner, which means I let my oven do all the work. To be fair, that lazy bum sat around all day doing nothing.

Tenderloin is easy, be it pork or beef. It's obviously the very best part of the animal since you don't have to worry about pesky bones or a thick layer of fat, but it's still incredibly tender (which is probably why it's called the tenderloin). It roasts beautifully, with only a little bit of oil or butter needed. Because of the size it's also a great thing to serve to company. 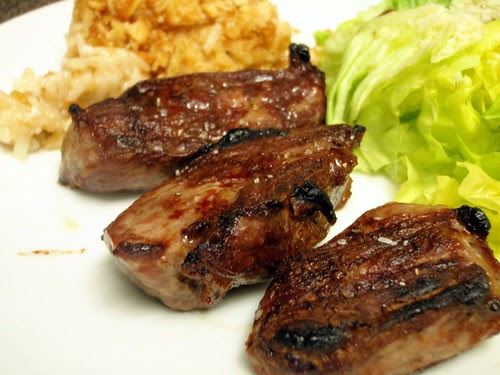 1. Preheat oven to 450. Place the roast in a shallow pan (if it has a narrow tip, tuck it underneath so the roast is the same thickness throughout the pan.)
2. Dot the roast with butter. Roast 30-35 minutes for medium rare. Obviously cook it longer for a more well done roast. Just a note- you're going to let it sit for a bit, during which time it will continue to cook, so you may want to pull it out before it gets to complete doneness.
3. Place the tenderloin on a warm platter, tent with aluminum foil, and let rest for 15 minutes. Slice and serve.
Posted by That Girl at 9:14 PM