Tips from a Pro 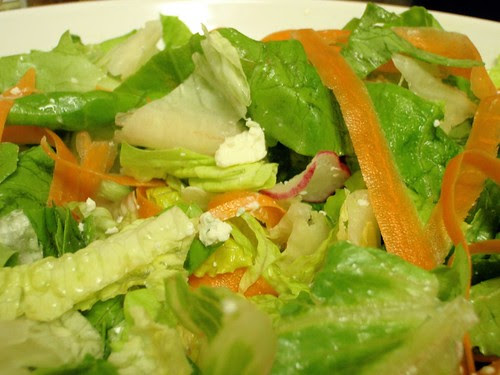 Yesterday Thatmom gave a lecture at the synagogue. The topic was "Heart Health" something that holds special meaning both because of Valentine's Day, but also because this week marks the anniversary of my father's death.

As Thatmom explained, she approached the topic from two separate angles: the first, as a health care professional, and the second as the wife of a cardiac patient. She noted the interplay between what the professionals say, and finding balance between what you are physically able to accomplish given your own lifestyle.

Since this week's topic of Eat.Live.Be. is tips from the experts, I thought I would include some of Thatmom's lecture. While Thatmom specifically spoke about guidelines from the American Heart Association, most of these tips really apply to living a healthy lifestyle in general. The American Heart Association calls these factors "Life's Simple 7" and Thatmom added a bonus tip.

- Eat a lot of fruits and vegetables, they have a higher water content, filling you up and they're low in calories and relatively low in sugar.
- avoid foods with high fat contents
- eat whole grain carbohydrates, they take your body longer to break down, giving more sustained energy AND they have more nutrients! Win/win!
- eat mindfully: choose carefully when eating out and watch your portion size.
When Thatmom began talking about diet and blood sugar, the audience seemed floored. People had a million questions, and frankly, I thought her points were fairly obvious. But people really don't understand the difference between produce and processed foods. There were questions about eating too much fruit, because, you know, fruit has sugar.

There were also concerns about veggies. And yes, believe it or not, some veggies are higher in sugar than others. Think about how sweet summer corn is. Someone in the audience asked about sweet potatoes. And sweet potatoes DO have more sugar in them than dark leafy spinach or kale. But again, if these are your only sources of sugar, it's really not something you need to worry about. Watching your sugar intake and diet is much more about reading the nutritional ingredients on packaged foods.

Thatmom and I were talking. She noted that she used to be doubtful when she heard the phrase "No one ever got fat from eating fruits and vegetables." But we discussed that the fact that the people who eat a ton of fruits and vegetables tend to be people who aren't eating the other crap. And you really can indulge in fruits and veggies without feeling guilty after. So go ahead and make yourself a giant salad. Throw as many veggies as you can handle on top. Be mindful of your dressing choice, because that's one of those processed foods you DO need to be concerned with. You can of course pick something terrible for you - like blue cheese dressing, just make sure to watch how much you use! See people, it's always about choices. 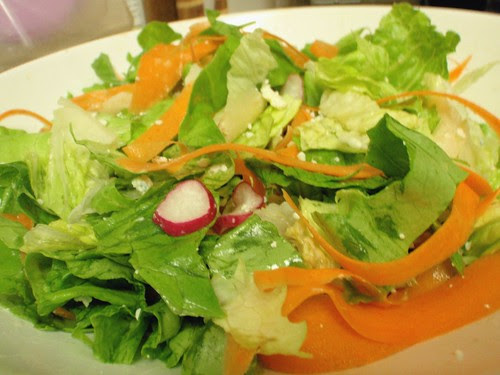 1. Divide salad greens between two plates.
2. Use a veggie peeler to peel carrots into strips and place on top of greens with sliced radishes.
3. Sprinkle salad with blue cheese crumbles and top with dressing of choice.
Next week's topic is all about healthy snacks you can grab on your way out the door.