Anyone low on iron? 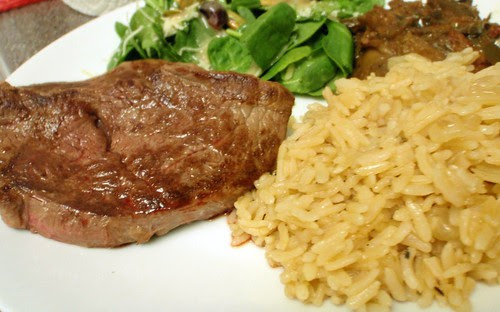 We've been eating a lot of red meat lately. Maybe you've noticed. Maybe your arteries have noticed. Thatboy thinks I'm trying to kill him off. Silly boy, he doesn't have near enough life insurance yet to make that worthwhile.

In high school, my friend Suo used to say that women should eat red meat around "that time of the month" to boost their iron because of all the blood loss. I don't honestly think there's any correlation, since that's extra blood we're losing, but the concept stuck with me.

Especially a couple years later when I self diagnosed myself with anemia. I don't know if I'm actually anemic, but I went through a period of time where I was really tired, all the time. There was no real reason for my fatigue, I had the same levels of stress, work, and physical activity that I always had. I decided to play with my iron a little, upping my intake of foods high in iron. Voila, fatigue disappeared. I'm a scientist at heart, and therefore I treated this little test as conclusive proof of my anemia. Plus, I go along with the "if it ain't broke" philosophy. If upping my iron intake helps me be less tired, it doesn't really matter if I'm really anemic or not.

So whenever I go through periods of being especially tired and worn out - even if I can trace the cause back to having some very long days as of late - I include a little extra red meat in our diets. And some dark leafy vegetables like spinach.

This steak is prepared stovetop, I believe Alton Brown calls the method "Pittsburgh Style." Coming from Pittsburg, I don't recognize this as being a local dish. I do love the gorgeous crust it creates on the steak. Brown and near glazed on the outside, warm and tender on the inside. It's my preferred menu of making something like filet mignon, although I have also been known to start the meat in the pan and transfer to the oven after that crust develops.

A cast iron pan is a must for this though. As much as I love a nonstick pan, it just doesn't work for a nice pan steak, because you need a little stick to brown it right. And cleaning becomes a breeze when you deglaze the pan with wine. It gives you a sauce and loosens up all the little stuck on pieces. It's easy enough and delicious enough to try even if you haven't diagnosed yourself with any sort of blood disorder. 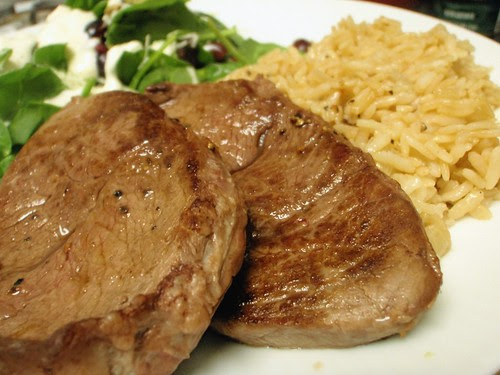 1. Dip a paper towel in the oil and rub over a cast iron pan. Heat the pan until it is searing hot.
2. Add the steak. Cook on one side until brown (about 5 minutes).
3. Turn and cook the other side for another 5 minutes. Remove from the pan and season with salt and pepper.
4. Add the wine to the pan, scraping up the browned bits to incorporate them into the sauce. Reduce the sauce for a minute or so and pour over the steaks.
Posted by That Girl at 8:21 PM