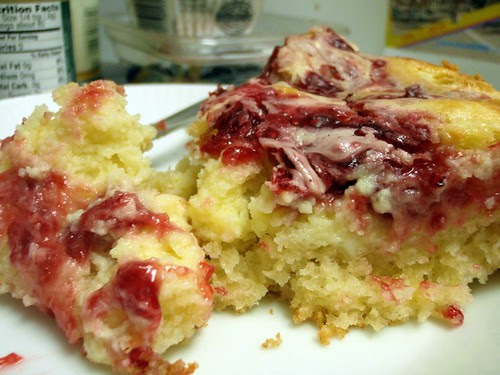 When I grew up in Pennsylvania we were worlds removed from a Jewish community. There was one other Jewish person in my school, and the Jewish population of my town could fit in a single room.

However, a mere hour and a half away lied our closest ties to Jewish civilization. An area in Pittsburgh known as "Squirrel Hill." And every year at Passover, this is where we would venture to stock up on Pesach friendly food. Of course, the trip would always include a stop at the bakery and the deli for our last feast before the week long ritual.

One of our trips t0 Squirrel Hill was not for Passover-stocking, but to dine with a Lebovitch family. I have no idea how my parents met them, or why we were driving an hour and a half for a dinner, but the dinner was completely memorable to me. First, because it was my first experience with Orthodox Jews. Like any other religion, Judaism separates out into various levels of orthodoxy, with Orthodox being the most conservative/strict/adherent. Our congregation was "reform" which leaned more on the "conservative" side. So visiting these people was a bit of an eye opener in terms of culture.

The Lebovitch family we dined with kept Kosher, which was a second reason the trip was memorable. I'd never met anyone who actually kept Kosher, the idea being akin to a unicorn or other mythical being. But this Kosher thing was going to work to my advantage in another way.

You see, when we arrived, Mrs. L told us she had picked up some kind of world famous cheesecake. The best ever. I can't remember where she got it, that's not the important part of the story. The important part is that Mrs. L wanted us to try this phenomenal cheesecake. But you, see there was a problem.

One of the tenants of keeping Kosher is that you do not mix meat and dairy. I had always assumed that meant no cheeseburgers, but it goes farther than that. You see, after eating meat, you can't have dairy products for about 6 hours. Which would mean, that to enjoy the cheesecake, we'd have to wait until after midnight. So the Ls told us their solution. Eat the cheesecake FIRST. That's right, you only have to wait an hour after eating dairy to consume meat.

Something about adults telling you to eat cheesecake first was life changing for me. Think about it, eat your dessert before dinner. It's brilliant on so many levels. Mostly because as a kid you don't really want dinner anyway, it's just a pathway to dessert. I can't tell you a single thing about whether that cheesecake was any good or not. But I do know that being able to eat it first, left a lasting impression on me.

So I'm going to share this cheesecake recipe with you and recommend you go ahead and skip dinner. Just eat this. For dinner. Or breakfast. Or any meal you'd like. Because I've been told by a reputable source that it's okay to eat cheesecake first. 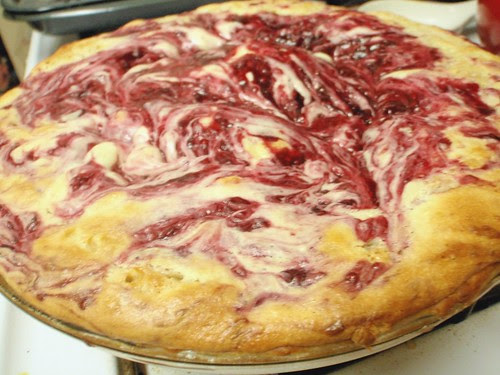 1. Preheat oven to 350. Mix the graham crackers with 1/4 cup sugar and melted butter and press into bottom and sides of 9 inch pie pan. Chill while preparing filling.

2. Combine raspberries, 1/2 cup sugar, 1 Tbsp cornstarch, and water in a saucepan and bring to a boil.

5. Pour cheesecake into the crust.

6. Pour the raspberry sauce over the cheesecake and swirl using a knife. Bake for 30-35 minutes until cheesecake is set.
Posted by That Girl at 8:13 PM