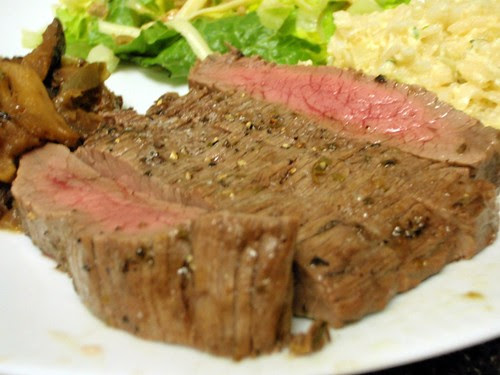 Thatboy has been especially sweet to me lately. Mostly it's in the things he says, like when he offered to stop by Target and pick me up some twizzlers because lately at night I want something sweet that's not chocolate. But sometimes his actions are equally as sweet. I don't always sleep well at night. Part of the problem is Thatboy gets up 2-3 times a night to hit the bathroom. Sometimes I can sleep through it, sometimes I can't. In my lightened sleep state last night, I vaguely became aware someone was standing over me, tucking me in. This morning, I confronted Thatboy.

Me: Did you tuck me in this morning?
TB: Yeah, I was going to the bathroom and I noticed you didn't have any sheets. I didn't want you to get cold.
Me: Yeah, I remember not being able to get any sheets a little before that, because you had taken them all. You did that this weekend too.
TB: Yeah, I felt bad.

I wanted to do something nice for him too. You would think that I would go all out and make a fabulous dinner right? Well, check your calendar. It's still a weeknight, and there's still a trial going on. So I had to make something quick, and something easy, but still something fancy. Thatboy is typical of most men, in that he's not one to turn down a nice steak. I swear yesterday the cooking board I frequent had a ton of london broil requests, which reminded me it has been forever since I've made london broil. Since all you're doing is broiling a steak, it's one of the fastest ways cook. I do love broiling for a nice quick meal. Traditionally, London Broil is made with flank steak. Thatboy HATES flank steak, so I tend to use sirloin instead. Save the salt and pepper for after cooking, to really let the flavor come through. 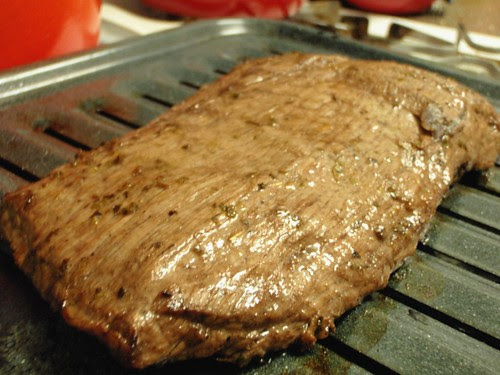 1. Preheat the broiler. Rub the garlic halves on both sides of the steak.
2. Rub the steak with the canola oil, using some to coat the broiler pan.
3. Place steak on a broiler pan and cook 4-5 minutes each side.
4. Sprinkle with salt and pepper, and cut along the diagonal so it's nice and tender.
Posted by That Girl at 7:50 PM