How I got my husband to hate ham 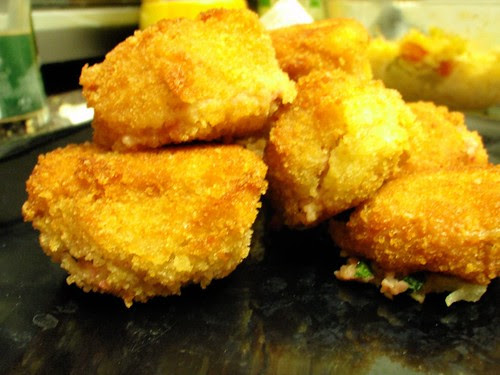 This is a post about Thatboy and his intense hatred of ham. He didn't always hate ham, in fact I caused this severe aversion.

I went through a period last year where I made a LOT of ham. It started innocently enough, Thatdad used to make ham and it had been years since I had it. I had a hankering for it. So I bought a ham, and basted and cooked it. The first night was heaven. I had forgotten that glorious taste of roasted ham. But there was a bunch more left over. Have you ever made ham for just 2 people? We ate ham for a long time after that. Long enough that Thatboy began to dread dinner. If he had more friends I would imagine he would have started inventing dinners, or late nights at work, or maybe a food allergy.

Since that time, he's been a little shy of ham. For the most part, I've been great about not serving him what he so intensely dislikes. Call it a guilty conscious. When I do use ham, I try to mix it in with something else. It's less about hiding the taste, and more about making it new! and exciting! And it works.

Ham croquettes have the classic ham and mustard flavor, but also a creaminess that directly contrasts with the crisp golden outer shell. I make these to pop into our lunches, since they're so easy to heat and eat without making a mess. And even Thatboy hasn't complained about them. 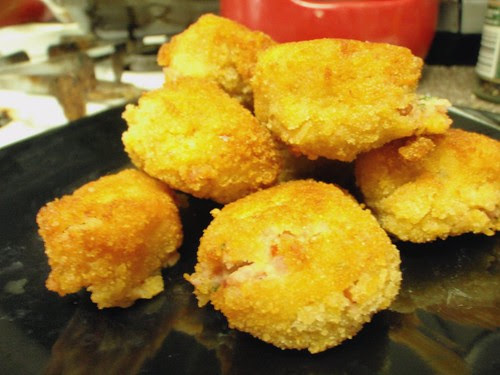 1. Melt the butter in a saucepan. Stir int he flour and cook about 2 minutes.
2. Add the milk, stirring as sauce thickens. Bring to a boil
3. Add salt and pepper to taste, lower heat and simmer 2-3 minutes.
4. Combine with ham, parsley, mustard, onion in a bowl and blend well.
5. Put the breadcrumbs in a shallow dish and the egg in a shallow bowl (pie plates work great for this)
6. Beat 1 Tbsp water in with the egg.
7. Shape the ham mixture into 1 1/2 inch balls. Roll them in the crumbs, dip in the egg, and do another roll in the crumbs. Refrigerate for 30 minutes.
8. Fill a skillet with oil and heat to about 360. Fry the croquettes in the oil a couple at a time until golden. (Turn them as necessary)
9. Drain on paper towels.
Posted by That Girl at 5:08 PM