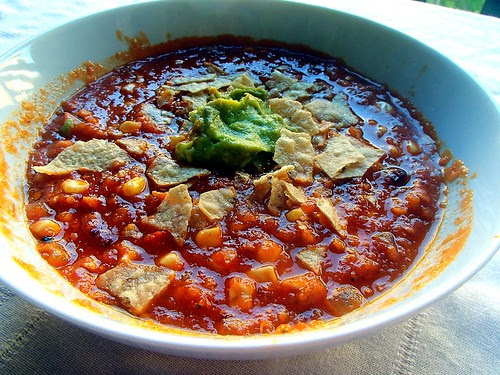 Thatboy and I did a lot of celebrating last night.  We ended up having a 4 course dinner and drinks inspired by my anniversary gift to him.

See, Thatboy and I have always stuck to the traditional gifts for anniversaries.  And the Seventh Anniversary is the Copper/Wool anniversary.  When I realized that I kicked myself for getting him a beautiful wool sweater for Christmas.  I should have saved it for this gift!  I was really stumped on what to get him.  When we were registering for our wedding he begged and pleaded to put a copper espresso machine on the registry.  Unsurprisingly at $2000 no one bought it for us, and it prompted Tesseract to ask if we were planning on opening a Starbucks.   I still felt like a commercial espresso machine wasn't probably something we needed but my efforts to turn up a personal copper espresso machine turned up nothing.  I thought of a wool blanket, inspired by the embroidered quilt Thatboy purchased for me for our Second (Cotton) Anniversary, but really - we are up to our elbows in blankets.

Eventually I settled on these:

Copper Mule Mugs engraved with our initials.  We're not habitual Moscow Mule drinkers, but they are our drink of choice when we visit Starlite, so I thought he'd like them.  I just didn't realize how much!  He exclaimed multiple times last night that he was so excited we owned mule mugs. When we got to the restaurant and saw mules on the menu we ordered them.  I had picked up ginger beer to go with his gift, so when we came home we had some more!

Thatboy wanted to capitalize on both the copper and wool aspects of the anniversary, so I got multiple gifts.

A new watch with copper accents (and copper links which would be under that little watch pillow).

And a new black wool coat (which I was in desperate need of!)  Thatboy had a heck of a time finding a wool coat in August.  I guess people in San Diego don't recognize the need for warm things in the summer.  I enjoy them year round - which is why you're being treated to another soup recipe.  In August.    And it's not even terribly original.  I've posted tortilla soup recipes before.  But this one takes advantage of fresh summer tomatoes, peppers corn, and avocado.  Making it so much better than my previous recipes!  I love roasting tomatoes for soup bases, which is why this technique may seem familiar to you.  It brings out a smokey richness that can't be matched. 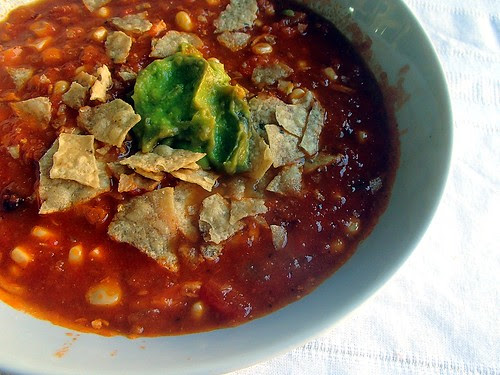