All My Life's A Circle

Who's ready to get all existential with me? Prepare yourself because this is where I tell you that birth is the same as death. Well maybe not so much "the same" as opposite sides of the same coin. I came upon this realization last week when L&J brought forth her own little initial, W. My first thought was of course, "they're going to need food." Which got me thinking - I always bring over a bunch of prepared meals to my new mommy friends, but I never realized how important those meals really were until almost three months ago.

When Thatdad died, we were inundated with people all the time, friends, relatives, and we were severely lacking in the food department. People brought cookies and cakes, but our refrigerator was in a constant state of empty and there was very little real food to be found. When no one was over, we scavenged bits of what we could find. Around dinner when the people poured in Thatbrother, my cousin China, and I took turns calling and ordering food and running out to pick it up for everyone. We obviously weren't grocery shopping, and really, neither was the family who had come to support us. I thought how similar it was to my new mother friends - the last thing you have time for is really the most important - making meals and running to the grocery store. And the family that comes to stay and help out really wants to be there for you, and not running errands. Of course there's probably a fairly constant stream of visitors, many coming at prime meal times and no matter what's going on in your life, a good hostess never wants her guests to be uncomfortable.

So as soon as I got word of W's arrival, I began planning meals. L is semi-vegetarian, in the "no red meat" camp so I wanted some things that were high in protein, but low in animal. 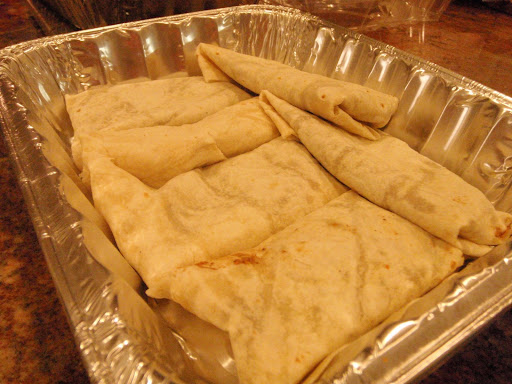 Sweet Potato and Black Bean Burritos (and L&J, since I know you read this and right now are scratching your head about those extra burritos that never made it to your home......I blame Thatbrother and UDubb who acted as my taste-testers. ) Veggie free, dairy free, and super easy to heat and eat. They can even be eaten with one hand, in case you need to hold a baby or something. 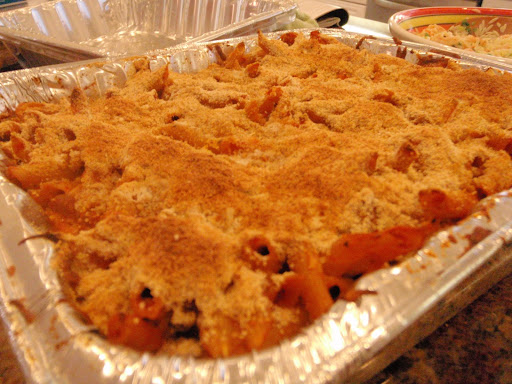 Baked whole wheat penne with turkey sausage. This one isn't as hands free, dairy free, or meat free - but turkey isn't red meat and I wanted to give her something that would feed a crowd, in case a crowd showed up. And a pasta dish with meat is usually a pretty big crowd pleaser. 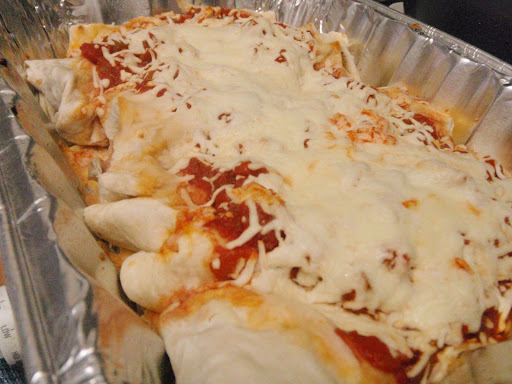 Black Bean Burritos. As Thatboy would say, these are "enchilado style" (which is his favorite way to eat burritos). These are a my compromise - vegetarian, but with loads of cheese. Less hand friendly, still good for a crowd.

Before I drove all these goodies over to L&J's home in Alaska, I gave her a little text telling her I was going to be stopping off at Whole Foods on the way up to do a little grocery shopping for her and did she have any requests? They don't have Whole Foods in her neck of the woods, and I thought they might be in need of some basic groceries. Even though L's mom was staying to help out, I didn't want her to have to run out and pick things up.

So I stopped off and picked up soy milk, bread, eggs, juice, cold cuts - just the basic stuff for a quick breakfast or lunch. I also snuck in a couple of chocolate bars because of their "Twilight" themed names. L&J both LOVED the series, even though L is the one who convinced me not to read any past the first because of my constant anger and outrage. "It's only going to get worse, and you're only going to get more upset," she warned me. So when I saw "New Moon" and "Eclipse" in the chocolate aisle I knew I had to throw some in the bag. Thatboy questioned why they didn't have "Breaking Dawn" which is funny because that's exactly what J said when he made his discovery of the treat.

I threw in a couple of nylabones for L&Js four legged friends (and a good thing too, it kept them occupied the entire time I was there!) and we were on our way.

My plan was to drop the goods and run, but I ended up staying and chatting with L&J and L's mother for a bit. I haven't seen L in a couple months - since our "let's make strawberry cupcakes" impulse date, so we traded stories about things we missed out as she nursed little W. For those of you who "know" L, you'll be pleased to hear everyone is doing really well. J is a HUGE help - L commented that he's such a natural he often tells her how to do things. L is healing quickly and looks tired but happy - really happy. Very zen relaxed happy. And as for little W? He's ADORABLE. And tiny! L&J think he looks big - but he doesn't. He's got these clear blue eyes (not a big surprise) and little old man face (typical for a baby. I hear they grow out of that and then back into it again). He's gaining weight like a rockstar and so far seems to like being part of their lives (I'm sure he'll feel differently around 14 or 15).

It's so heartwarming to see L&J with W, and a reminder to me that life does go on and good things do happen.