More Fun With The Firsts

First and his insta-family are trying to make the most out of their time in California. While First makes it out here sporadically, it is First Wife's first visit here and obviously First Child has limited travel experience racked up in her first 2.5 years. So they're trying to cover all their Southern California bases. Today they spent the day in San Diego and are working their way up to Santa Barbara over the next week. We met up with the Firsts for dinner tonight in La Jolla.

The requirements for dinner was some place kid friendly (First Child) with some healthy dining options (First Wife) and beer and man food available (First). I gave them a list of some options and First chose the Karl Strauss Brewing Company. I'm not terribly surprised, I had a hunch that was going to be his first pick.

For those not in the know, Karl Strauss is a San Diego based brewing company. It's a chain, which I usually try to avoid when people are visiting, I mean you don't need to travel across the country to eat something you can find in your backyard, but all our favorites aren't exactly loads of fun for a small child. The food is good, fun, and easy, but the beer is the highlight. And we must have looked cute, because our waitress brought us all samples of the brews to try while we ate. We all got different burgers, except First Child who had chicken fingers. I didn't take pictures because while First would probably accept my eccentricites, he brought along an old friend they're staying with and I get enough strange looks from strangers not sitting at my table. Besides - y'all know what a burger looks like, right? We had beef burgers, turkey burgers, veggie burgers - quite the diverse little table. First Child spent the entire night regaling me with stories about how dogs chase cats and cats jump over fences.

After dinner, I dragged the crew next door for some tart ice cream. They don't have it where First's family comes from and First Wife has been trying to cut out her sugars lately since she gets to wear a gorgeous white dress in a couple of months. It's called Green Apple and we all decided that was also the best flavor. Other choices included chocolate raspberries, blackberry, and original tart with lemon. It was a huge hit with everyone, including First Child who insisted on only eating hers out of the little sample cup. Then she insisted everyone sit at the teeny tiny tables made especially for people like First Child. How cute is the First Family? 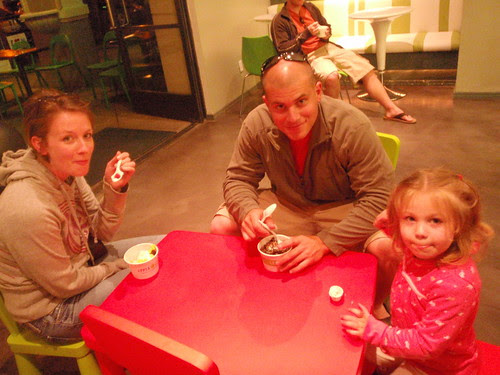 It was fun spending time with First and his family and I know they're going to have a great rest of their trip. Tomorrow they're headed up to spend some time with Thatmom, Thatbrother, and UDubb.
Posted by That Girl at 10:42 PM