Back when Thatboy and I lived in Orange County it wasn't uncommon for us to awaken to a phone call on a weekend morning:

"Wanna meet us for breakfast in thirty minutes?" It was always Thatdad, and it was usually around 7:00 in the morning. You don't even know the restraint he showed by waiting until 7:00, since he had already been up for hours by that point in time. On weekends he'd let Thatmom sleep in till 5 or 5:30. Waiting later than 7:00 am to eat breakfast was practically like eating lunch so there was never negotiations to move breakfast to a more reasonable time like 9 or 9:30.

Although Thatdad and Thatmom went out to breakfast every weekend at "their place" which we won't be returning to anytime in the near future, Thatfamily would always meet for breakfast at The Cottage in Laguna Beach. 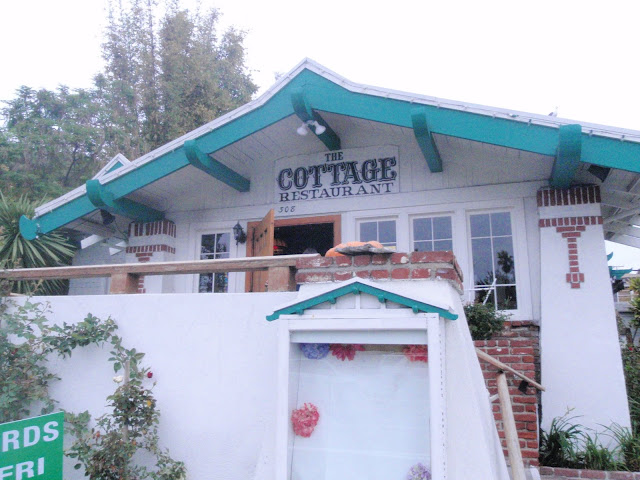 We haven't been to The Cottage in a while, and Thatmom thought it might be nice to have a Mother's Day breakfast there - but not on Mother's Day because we had too much to do. So Saturday morning we headed down to Laguna. 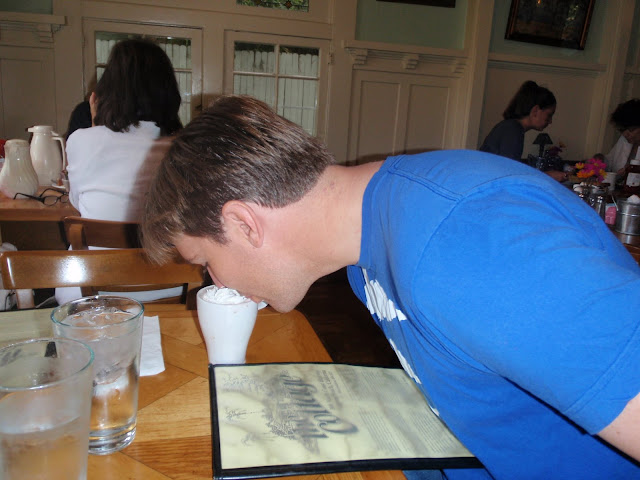 UDubb lives across the street, so her and Thatbrother got the phonecall at 8:00 that Thatboy and I used to get on a regular basis. See how sweet we are, letting them sleep in a whole extra hour? We still beat them to the restaurant, so Thatboy entertained himself while we waited. His arms are not broken. They work perfectly fine. 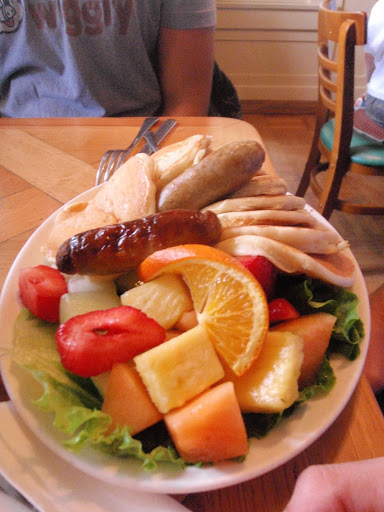 Thatboy had your basic "Junior Breakfast." When I told him he didn't need 10 pancakes he argued with me, making a circle with his thumb and forefinger telling me how small they were going to be. We brought almost all of those pancakes home. Is anyone else addicted to cold pancake leftovers or am I just weird? When his meal arrived, Thatboy actually asked where his egg was...the waitress kindly directed him to check under his mountain of pancakes. And I know a number of you are probably surprised at the absence of bacon on the plate. I know I was. Apparently someone felt like being "different." 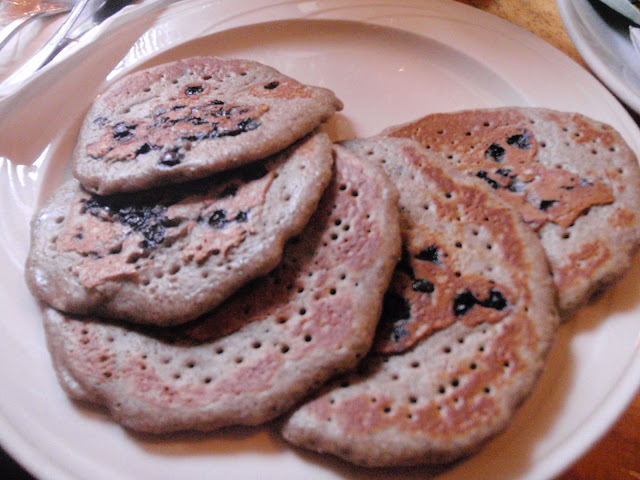 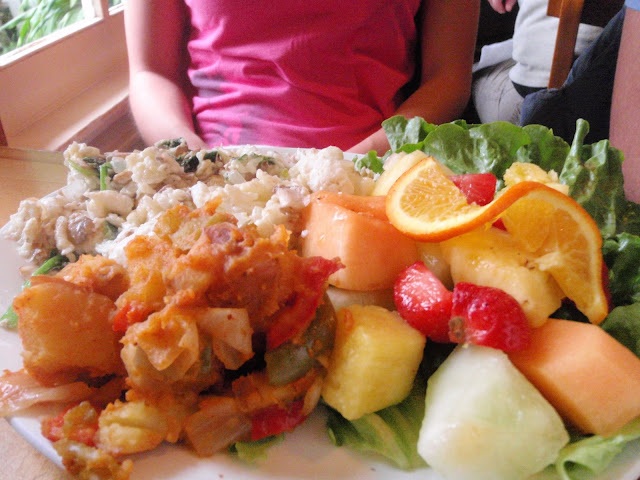 UDubb's Laguna Scramble. Don't worry! She got eggwhites! So it's SUPER healthy. Just ignore all those fried potato things. I'm pretty sure she did. 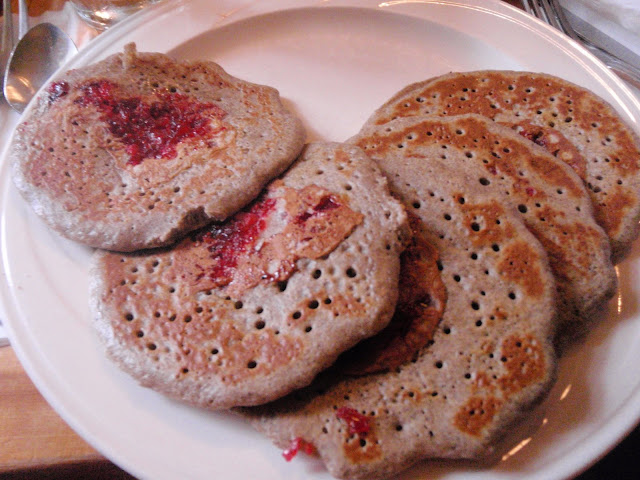 I'm not usually a pancake person, but I was intrigued by the buckwheat cranberry orange pancakes. When Thatmom mentioned they piqued her interest also we decided we'd go halvies. I'd order these, she'd get the blueberry and we'd split them. I think the blueberry won out, although these were an interesting change of pace. I like the tartness and was feeling in kind of a cranberry mood on Saturday. 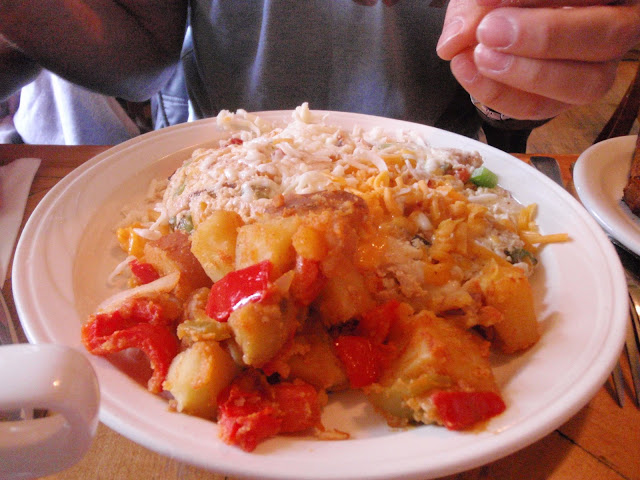 Thatbrother's Fajita Omlette. Apparently he wasn't aware it had chicken in it. UDubb tried to tell him he usually orders the same thing she gets, but I guess he felt like being a little "different" also. Notice the absence of fruit on his plate? I'm thinking that when you order an omlette filled with cheese and egg and a side of potato they assume you're probably not going to eat any fruit. Which is a shame, because Thatboy ate most of his, UDubb was sitting too far away, and I obviously couldn't steal any from Thatbrother.

After breakfast Thatbrother and UDubb headed to work and we walked around Laguna. We picked up some presents, hit up one of Thatmom's knitting shops, and browsed for most of the morning. Then it was errands the rest of the day.

A lot of my weekend cooking comes from magazines because I cook for Thatmom. Magazines mean she can look at a dish and let me know if it's something she'll eat, or something that looks good to her. She's not a great eater during the week, so I really concentrate on making things for her on the weekend. Last week I got the new issue of Bon Appetit and saw a recipe I knew she'd like: Shrimp Scampi with Green Onions and Orzo. 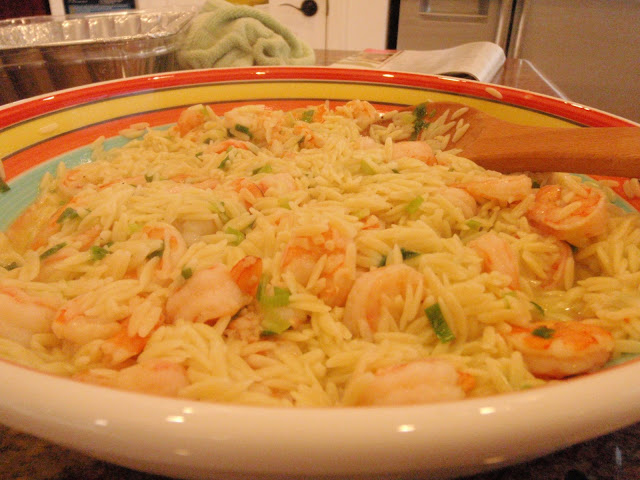 I was right. She liked it so much she didn't even put cheese on it - which is a HUGE thing for her. She puts cheese on everything. This one will definitely go into the rotation.

After a little trauma drama (because what weekend would be complete without) Thatbrother and UDubb came over so we could all watch Benjamin Button. Thatmom and I had been DYING to see it and the weeks surrounding it's release on the big screen were accompanied with a flurry of emails back and forth between the two of us. See, from the previews I was beyond confused. This movie looked like it was based on Andrew Sean Greer's The True Confessions of Max Tivoli, a book I had loved so much that as soon as I finished it, I bought copies for all my friends and Thatmom so they could read it too. Thatmom had emailed me asking if the movie was based on the book and I did a little research and all signs pointed to the fact that it was based on an F. Scott Fitzgerald story with the same premise. There are a number of articles written about the story/book/movie that we sent each other as soon as they turned up. So Thatmom and I read the short story - which (from the coming attractions) seemed to be completely unrelated to the movie. Except for the premise. Which again, was also the premise of Max Tivoli. AND the previews seemed much more similar to the book than the short story. With that background we watched the movie, which is nothing like either the book or the short story, except of course for the premise. Neither of us were a big fan of the whole "Katrina" aspect which we found unneccessary and once again, the book proved MUCH better than the movie. Even the short story was better if you're looking for a quick read.

Sunday, Mother's Day, had us heading up to the Cousins in LA. I am terrible with cousin designations - 1st, second, removals, ect. because in our family there is no designation. Everyone is just a "cousin" and we're close with all of them - no matter how related, or how far removed. Thatmom grew up with Repro and Knits almost as siblings, which is how she always considered them and we likewise grew up with their kids. Knits just moved out to California and since her son was visiting with his future family, Repro thought we should all meet in the middle, his house, for a little mother's day celebration. 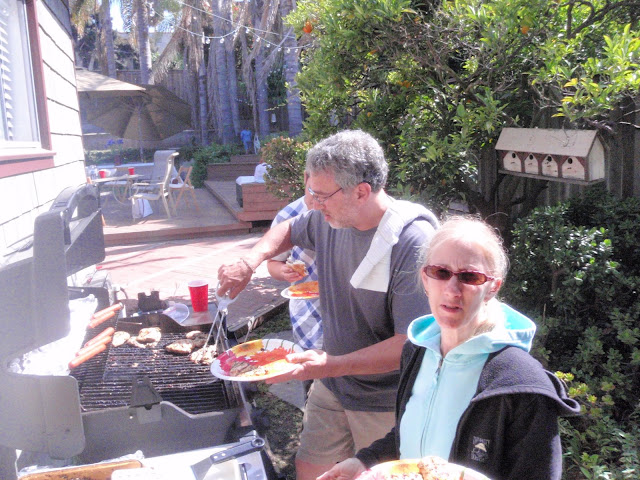 Repro manned the grill. Salmon, burgers, hotdogs, and some of the best chicken you've ever had. I think everyone had some chicken, and those that didn't soon rushed over to remedy their mistake. 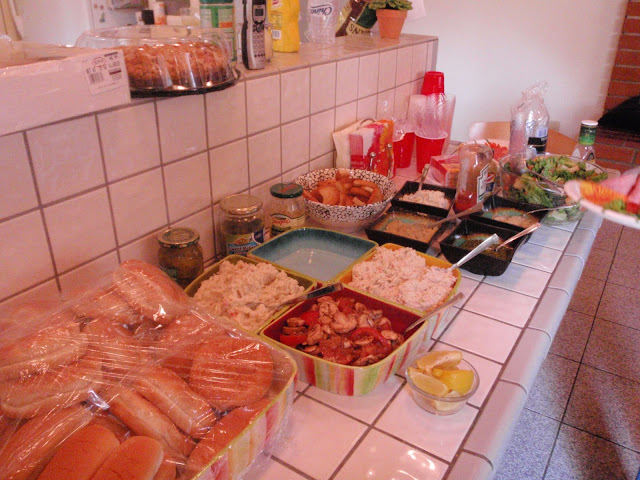 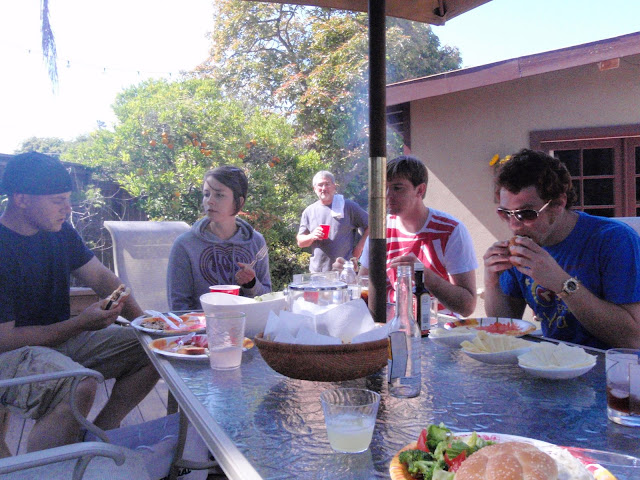 We kinda segregated ourselves between the kids and the adults - with Thatmom sitting at the kids table. For most of us, it was the first time meeting First Wife. Her and First live across the country and are going to be married this fall. This is probably a good time to explain that her moniker is "First Wife" not because we expect First to marry someone else in the future, but because she's marrying First - the first grandchild in our family. Even though it's only by 2 months, he never let me forget he's the oldest. Coincidentally, he's also going to be giving us the first grandchild of the family when he marries since First Wife brings her adorable daughter into the mix. First calls them his "insta-family." 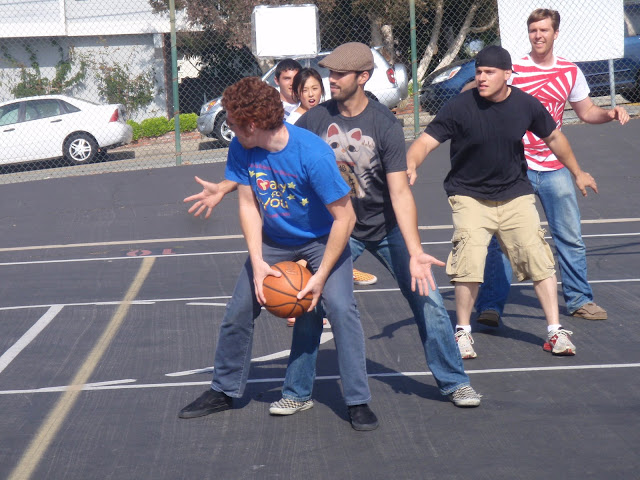 Because none of us is very smart, we followed our ginourmous meal with a little 3-on-3. I love this picture because it shows everyone...even though it's a little hard to make out Mustang there in the back, and Bass is doing his best to keep his eye on Thatbrother's "killer D." I think everyone ended up with an elbow or ball to the face at some point in time during the game, and Thatboy asked for a stopping point on numerous occasions. He's definitely getting old. And you can't see from this picture, but UDubb played in sandals. And she still managed to run circles around these guys. She's a definite rockstar.