There is no rest for the wicked, and so when we disembarked from the ferry (do you disembark from something or do you simply disembark?) we walked through Yaletown and up Robson Street. 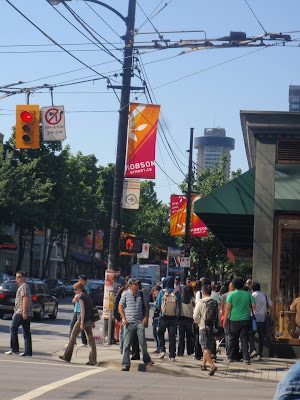 Robson is the shopping mecca of Vancouver and describes not just the street itself, but also the side streets that branch off and lead to high end stores and malls. Just a note for us non-Canadians....Sears on Robson is different than any other Sears I have ever seen. Think Saks. Think Bloomies.

In addition to shopping, Robson has another treat: 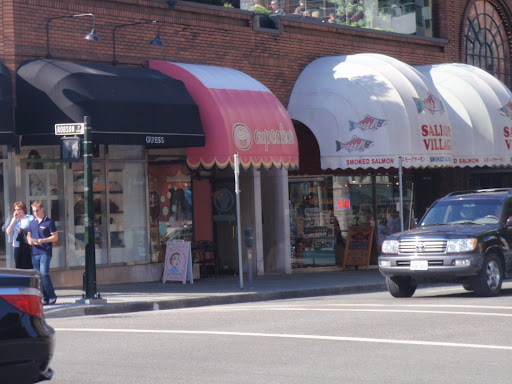 No, not the Salmon Village (although a great stop for all your salmon needs). That pink awning marks Vancouver's cupcake shop! The cupcakes here are so colorful and sweet looking with fun names and funner flavors. They come in three sizes: mini, normal, and HUGE. 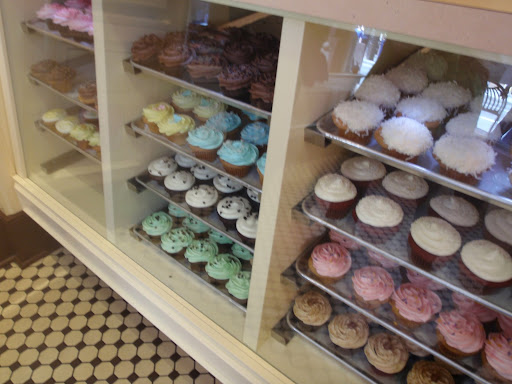 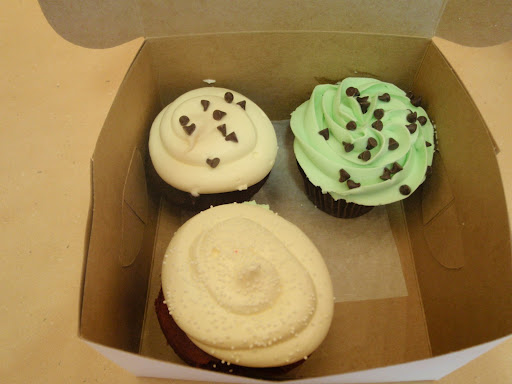 After shopping, it was time to head to Stanley Park. Are you tired yet? Well, don't worry. We don't have far to go! Stanley Park itself is GORGEOUS and I could have spent days just seeing all the park has to offer. 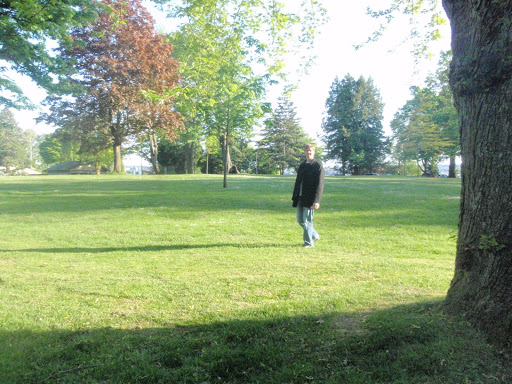 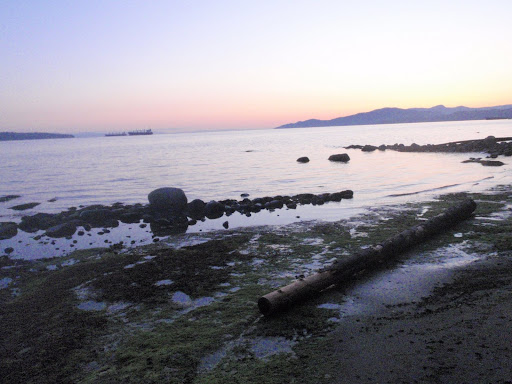 Biking, kayaking, hiking, the aquarium....Thatboy and I are already planning a trip back. Not only is the park beautiful with its lawns, trails, and canopy trees, but it also affords the best views of the city. 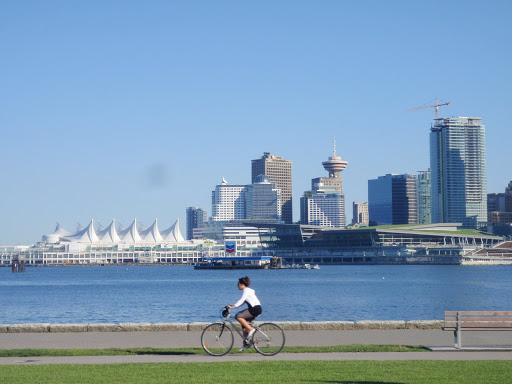 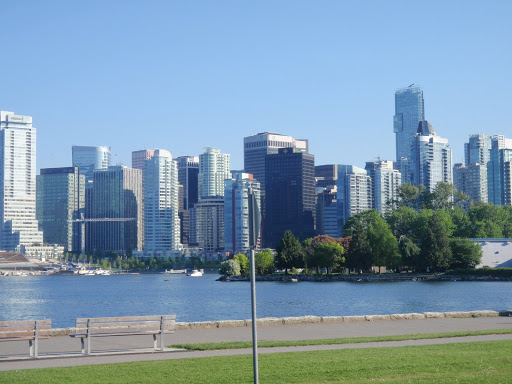 Since we were short on time, I knew we wouldn't be able to see everything Stanley Park had to offer. I made sure we got to see the totem poles. To paraphrase Thatdad, "Totem Poles! Growing right out in the open!" 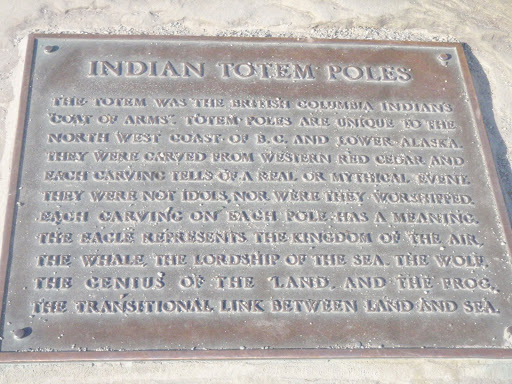 The originals were built in the 1800s, although these are reconstructions. At the base of each there is a picture of the original. Thatboy noted that these are still called "Indian" totem poles instead of Native American (although I believe he said Native Canadian.....but I didn't want to break his heart and let him know that Canada is still part of North America.) 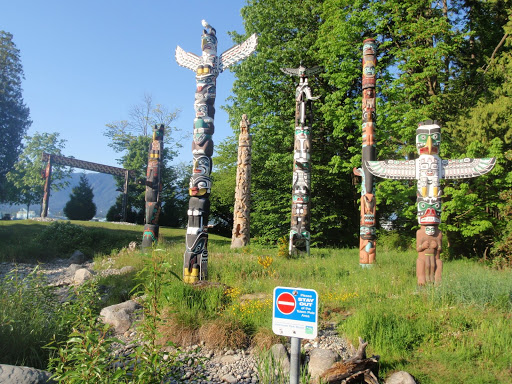 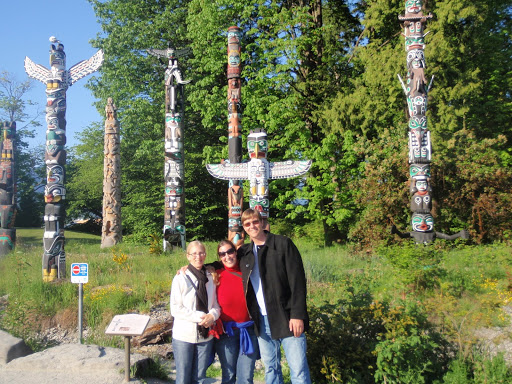 Wanting to stay in Stanley Park for most of my life, I had made reservations for dinner at The Fish House. 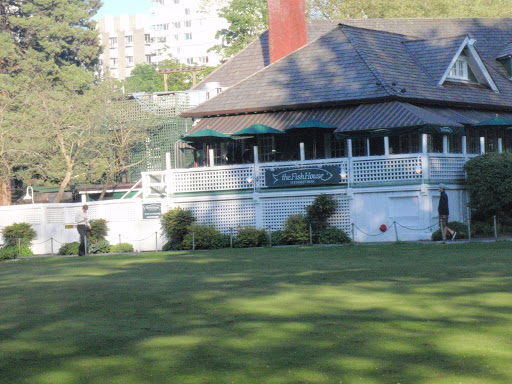 The Fish House specializes in British Columbia cusine, with the obvious emphasis being on the fresh local fish. The "fish list" changes daily and is prepared simply with lemon butter. It also includes an oceanwise symbol for dishes recommended by the aquarium as ocean friendly dishes. The wine list featured many local wines which were so wonderful we're saddened at being unable to get them here in the states! 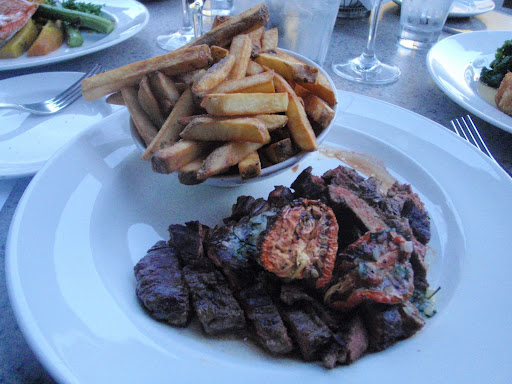 If you know me, you know I don't really eat fish. Luckily this has never proven to be a problem for me, since most fish places have some nonfish on the menu. Like the steak frites in herb butter. I had actually been craving steak frites for a couple of weeks now. That's a weird thing to crave isn't it? This was the weakest of the three dishes. I'm not sure whether it was because there was a huge party that had come in right before us or because the nonfish dishes just aren't as good. Everyone else was pleased as punch with their meals, so I can recommend this place for all you fish eaters! I enjoyed my steak with a Peller Estates Merlot, which I really enjoyed. 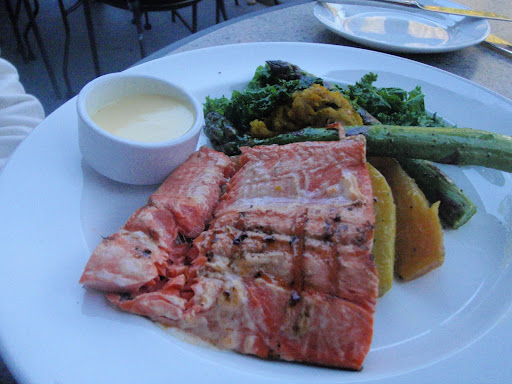 Thatmom thoroughly enjoyed her wild sockeye salmon. They prepared it with the lemon butter on the side for her and served with fresh seasonal vegetables. Thatmom is a fan of sweet wines, the sweeter the better. Our fabulous waiter brought her over several to try before she selected the St. Hubertus Riesling. She loved this wine, and she's pretty picky about her rieslings. 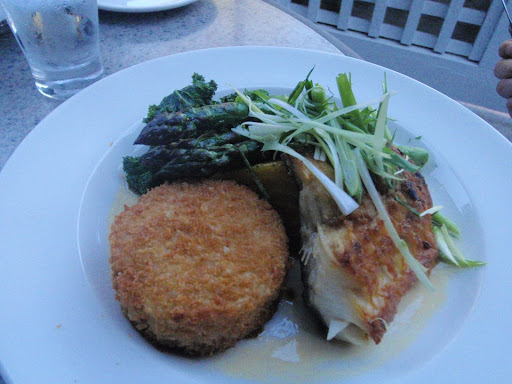 The most adventurous out of our trio ordered the sticky chile sable fish. We had never even heard of sable fish which was described as a cross between a tuna and a trout. White like tuna, flakey like trout. Thatboy's dish was pan roasted local sablefish in a sweet soy & chili glaze with a crispy lemon risotto cake. I can't comment on the fish, although he was very pleased with it. I can, however tell you the lemon risotto cake was one of the most fabulous things I had ever put in my mouth. To drink, Thatboy chose the Oak Bay Pinot Meunier, which wouldn't have been my first choice of wines with fish, but Thatboy hardly ever drinks whites if he can get away with it.

After dinner we brought Thatmom back to the hotel before Thatboy and I headed down the street to the Lennox Pub for a drink. It's a very "locals" pub as evidenced by the good natured teasing the waitress gave us trying to pronounce the names of the beers. "You're not from around here, are you?" she asked. Then again, how would you pronounce Kokanee? There are no pictures because this is about the time of night when I started crying hysterically. I get like that a lot lately. It just comes over me. Spending the day with my mom and doing things we might have done with Thatdad hit me once I sat down for the night. Our poor waitress. Thatboy said she must have been so confused since our body language didn't indicate we were having a fight, and yet, there I sat bawling. We finished our pitcher and headed back to the room to call it a night. 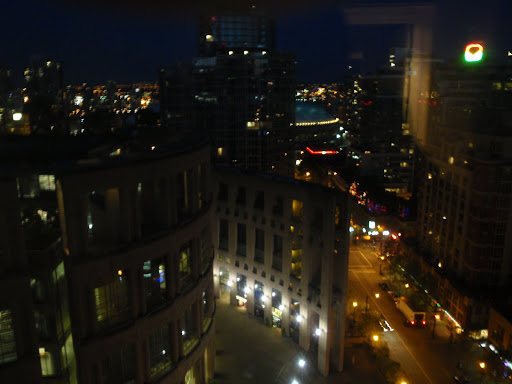 Up next: Day 2 and our outdoor, death defying adventures!
Posted by That Girl at 12:06 PM