We returned to Kitsilano for our final morning to have what has been proclaimed as the best breakfast in Vancouver. 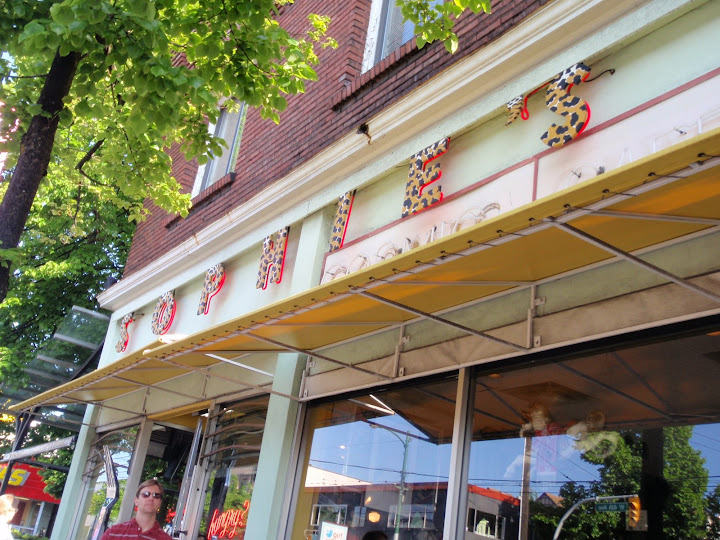 Sophie's Cosmic Cafe is an eclectic, diner style restaurant where there is as much good stuff on the walls as there is on the menu. If the atmosphere alone isn't enough to sell you on the place, the food confirms their rightful position in the breakfast rankings. 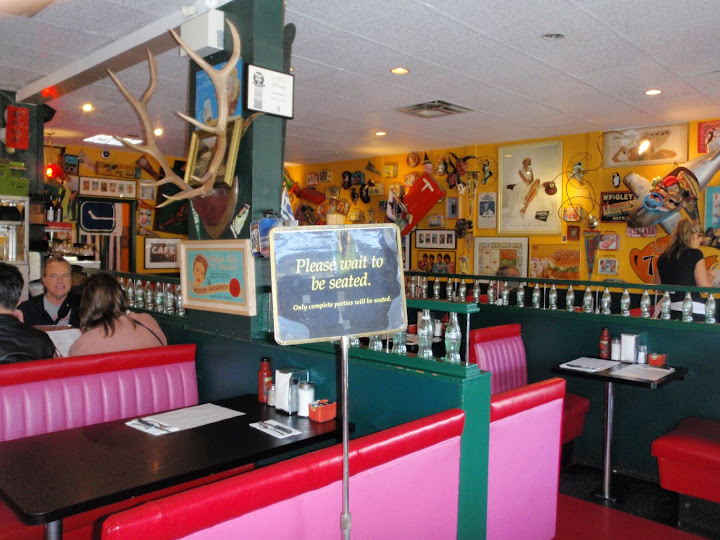 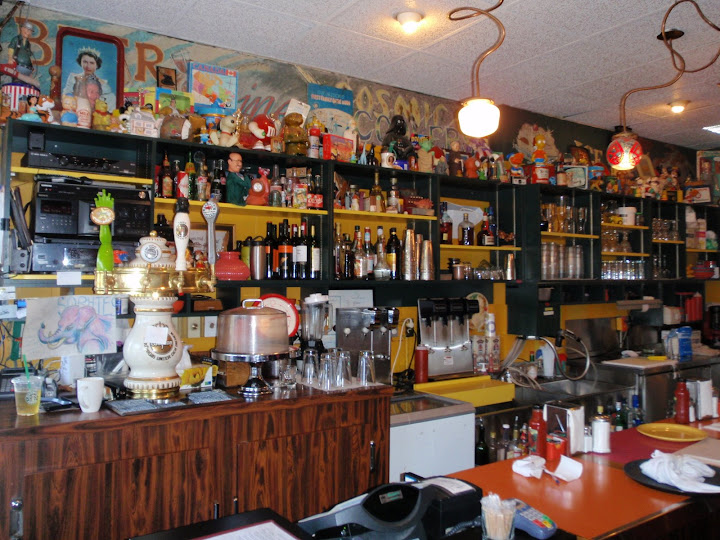 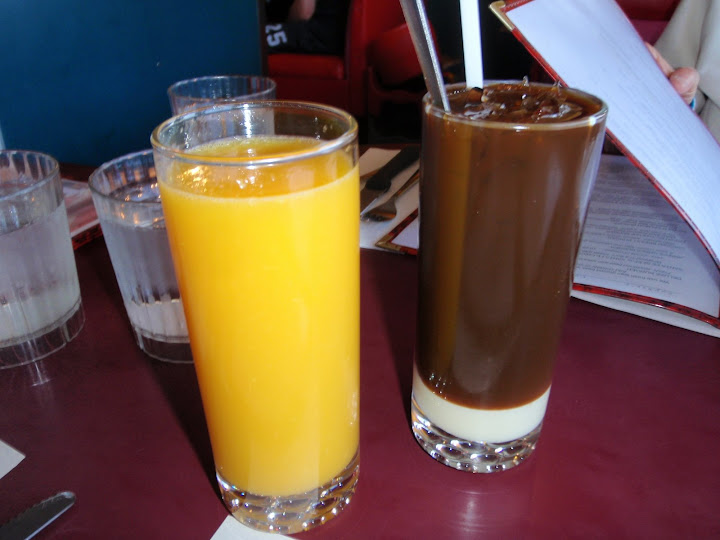 I was uber-excited to see an iced Vietnamese coffee on the menu, so of course I started with that. If you're not in "the know" Vietnamese coffee is strong and dark, but served with condensed milk which is my favorite kind of sweetner...and perhaps the worst for you. I had often enjoyed the beverage hot, but never had it over ice before. And with the balmy spring weather a cold beverage was just what the doctor ordered. Thatboy ordered a regular ole coffee to go with his fresh squeezed oj. 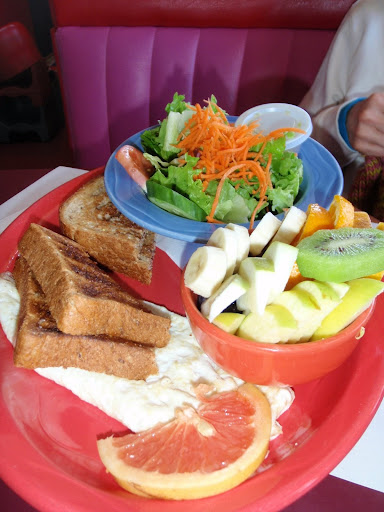 Although the menu specifically proclaimed there would be "no special orders" Thatmom explained to our kind waitress that all she really wanted was eggs, toast, and fruit and miraculously the waitress made it happen...with a side salad thrown in. Because goodness knows there wouldn't have been enough food without it. 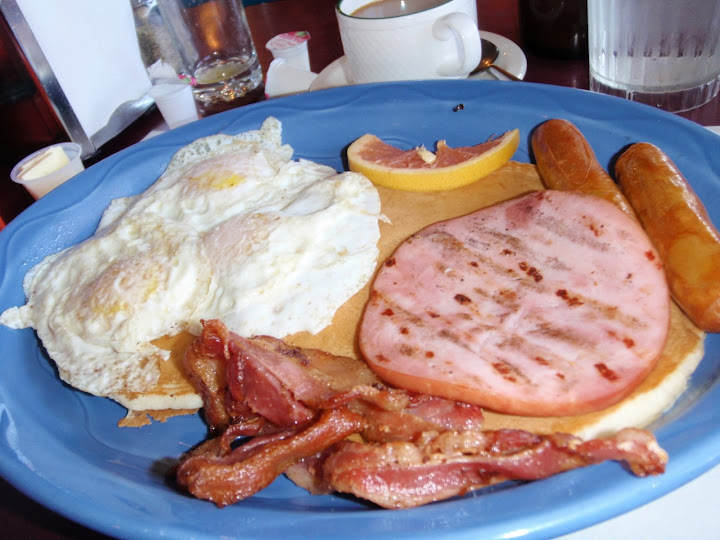 Thatboy, on the otherhand, decided that "when in Rome".... (his new favorite expression which he believes means to act as immorally as possible when traveling) he should order the lumberjack special with pancakes, bacon, eggs, sausage, and of course - CANADIAN bacon. (How embarrasing. I'm quite certain the waitstaff assumes he doesn't get fed at home. Which I like to emphasize by remarking loudly through out the meal "Better enjoy that, it's the only meal you're eating this week.") 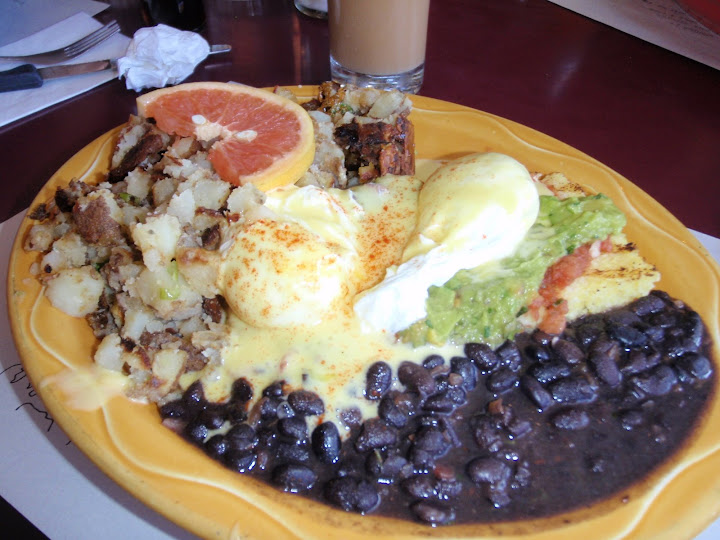 To further drive home the point that we are gluttonous Americans, I ordered the Southwestern Benny - which quickly became the-best-breakfast-I-have-ever-eaten-in-my-entire-life. Seriously, I am already working on making this at home so I can eat it every weekend from now until enternity. I would eat it every day, but methinks it may not be the healthiest thing I've put into my body. And friends, I'm not even talking about the potatoes and beans (although I developed an unnatural affection for black beans and cornbread from my ETG days). I'm talking about the gorgeous mound in the middle there. Start with fresh, sweet, homemade cornbread as moist as cake. Top that with some fresh salsa and some fresh guacamole. Now put two perfectly poached eggs on top of that. Finish off with the lightest hollandaise you've tried, neither too lemony or eggy. Each bite was like tasting heaven on a fork.


I hope you liked those pictures, because they're going to have to carry you through the rest of the post. See, after Sophie's, we headed back to the good ole U.S. of A. We had the time to take the more scenic route, along the 1. We reached the border at Aldergrove/Lynden with plenty of time to spare since there wasn't a single other car at the border crossing. As I whipped out my camera to document this iconic moment, the battery flat out died. I guess I shouldn't have been too surprised since the "battery dead" light had been flashing at me since our dinner the first night. I looked at it as a Channukah miracle - that little battery lasted just long enough to document our trip, and not a moment longer.

So I have no pictures of cute little Lyndon, a dutchish looking middle America town that was completely closed on Sunday. FWIW, I don't feel like we missed out too much since each of us had visited Solvang which is much larger and open 7 days a week. I cannot show you the mother deer and two baby fawns that crossed directly in front of our car as we drove through a residential neighborhood in Bellingham. And you'll just have to believe me when I tell you about how beautiful and clear Lake Whatcom was on that morning as we drove around the lake and had a last picnic lunch in the park. I'm sure Thatboy has pictures of all of these sites on his camera (well - except the deer. He makes it a point not to take pictures WHILE he's driving. ) but he's not as quick as I am to upload, so I'm still waiting to see what shots he got.

All I can tell you is the drive back was scenic and leisurely, filled with charming towns, lakes, and animals. We had a fantastic trip and Thatmom already has me planning our next adventure!t
Posted by That Girl at 3:43 PM