I want to send all my love, good thoughts, and apologies to Sweetcakes. I never should doubt her. She is always fabulous. We met for coffee last month and were discussing my upcoming nonstop travel. The coffee itself was was funny timing since Sweetcakes and I had just seen each other the week earlier, while we were on our travels. She mentioned New Years and I groaned. New Years is the holiday I hate more than any other holiday. Ideally I would love to spend the night, curled up with Thatboy and Thatdog watching old movies. But I always feel the societal tug to do something splendid and fabulous.

Sweetcakes told me that we had to join her for New Years. Every year they spend New Years with "the crew." Thatboy and I have been inducted into the Crew several times and it's always a good time. A good time that has Thatboy feeling like an old man for days after. I accepted the invitation, relieved that the plans at least would keep us in our neck of the woods.

And then as the date approached we found out what the plans entailed. Dinner at a Georgian restaurant and then heading to a dive bar that only served beer. Thatboy called me on his way home from work:
TB: How are you feeling about tonight?
TG: Meh.
TB: I'm feeling the same way. Should we cancel?
TG: No. I don't want to be the girl who cancels last minute. Besides, we always have fun when we hang out with the crew. I'm sure once we get there we'll have a great time. I bet I'm just feeling meh because I'm still not feeling 100% healthy.
TB: Well we do have champagne in the fridge, so if we're not having a good time, we'll just leave early.

As I said, I never should have doubted Sweetcakes. The evening was a smashing success. Thatboy and I had such a good time!

We showed up at Pomegranate, a Georgian restaurant that seemed just large enough to hold our huge party. And yet more huge parties continued to show up. It's a neighborhood joint, with inspirational and humourous messages scripted by patrons all over the walls and ceilings, in more languages than I've seen outside a UN building.

The drinks menu was recited by our waiter, which consisted of a vast amount of Eastern European beers, and a couple bottles of Georgian wines. We all chose from the varieties, and then sampled whatever the person beside us got too. Well except for Sweetcakes who snubbed her nose at my dark beer! 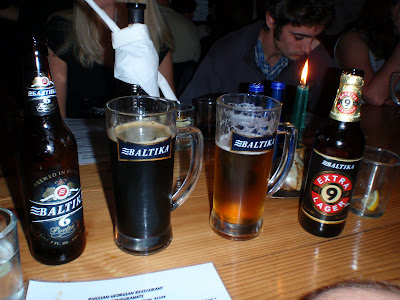 I got a Georgian porter which was sweeter than any porter I've ever had! It tasted like black coffee with loads and loads of sugar! Thatboy ordered the extra lager because it had the highest alcohol content. Well at least he's predictable.

We let Michigan and her husband do all the ordering since they had picked the restaurant and had been there before. Plus, the owner was having her sit on his lap when they first got in, so we figured that was a good sign. 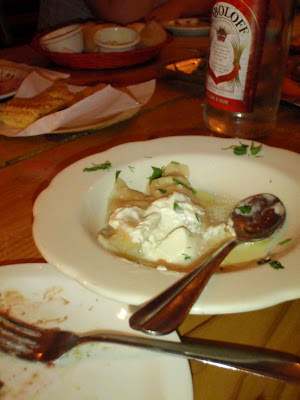 Vareniki
You may recognize these are pierogies. Or you may not be able to discern what these little blobs are. It was hard to take a picture before they got snatched up on all sides. Ahhhh just like Mrs. T used to make! 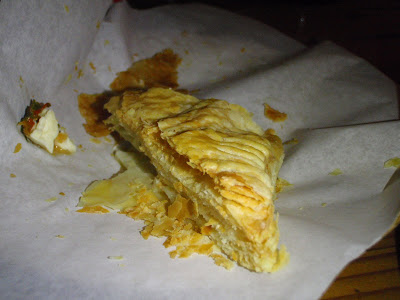 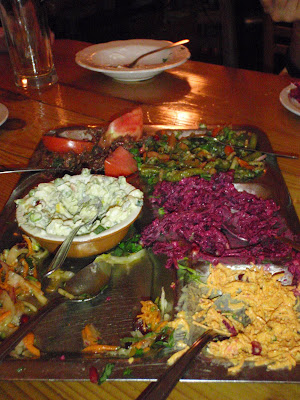 Some salad appetizer. It's not on the menu, but the friendly waiter told us it was a must and so we ordered a couple for the table. We'll start at the top left and work our way around:
"The one with Tomatoes" otherwise known as "The Indian one": This was a table favorite. Spicy, meaty - even though it was meatless.
"The greenbean one": Sweetcakes husband loooved this one. I think. They all start to blend together after a while. I was less than impressed. I think Thatboy was too.
"The beet one": I skipped this one due to beet aversion. But Sweetcakes husband said it tasted like feet, so I don't think I missed much.
"The carrot one": I really liked this one. Thatboy thought it was garlicy, but no one else could taste garlic at all, so we think that extra alcohol must have kicked in right about now.
"The other one": I don't think anyone was really into this. We don't even know what was in it. Although judging from the above plate, we ate it anyway!
"The potato one": The general consensus was that it tasted like potato salad. Annnnnd that's all we had to say about it. 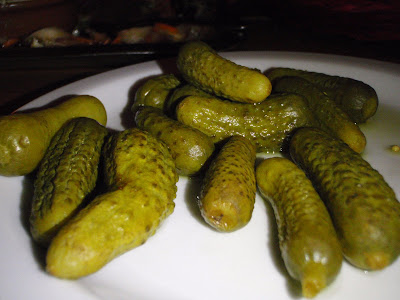 Pickles
We didn't order these, but they showed up anyway, just like the bread basket with garlic butter. Somehow these ended up right between Sweetcakes and I...and we didn't make a move to share them. Yum little pickles! 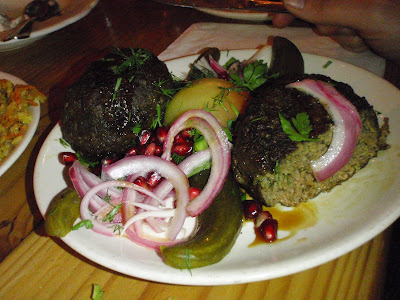 Thatboy ordered the special meatloaf - lamb and beef. Except the waitress who delivered them wasn't familiar with the term meatloaf so she kept asking who was having the lamb cutlets. And no one had ordered lamb cutlets. Finally Thatboy explained he had ordered the special and his meal was promptly delivered with an admonishment that it was indeed the lamb cutlets. Thatboy loooooved this dish. He declared that he MUST return to this restaurant. He asked for a box, and then ate the whole thing anyway. 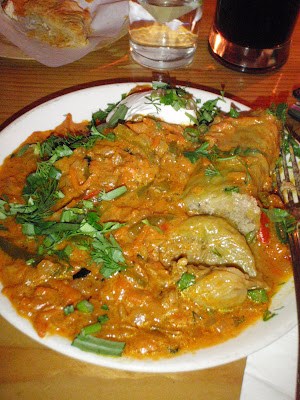 Since this was my first time at a Georgian restaurant, I had asked for recommendations on my cooking board. Someone replied that I should get the cabbage rolls. Sweetcakes had checked the Yelp review before dinner which had also recommended the cabbage rolls. Michigan had also heard good things about the cabbage rolls, and so guess what we all ordered. And it was the most fabulous thing ever! I think it was a hundred times better that Thatboy's meatloaf! The tomato based sauce was filled with spices and so flavorful. The beef was also perfectly seasoned, and the cabbage came apart with just a little fork pressure - no knife needed! 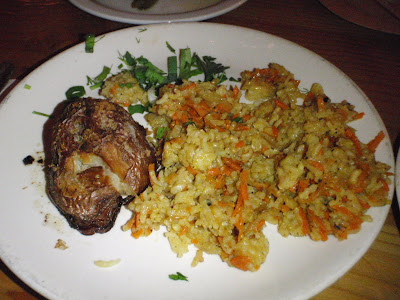 Each meal came with a side plate of rice and potato. While none of us can understand why you'd need rice and potato, both were excellent. Sweetcakes said the potato was her favorite since it was salted to the extreme. Ahhh a woman after my own heart!

As we finished up dinner, the owner stood to make a speech and had each of us raise our glasses to toast the old year and look forward to the new year. It gave the place a great family atmosphere.

Instead of the plan to head to the dive bar, we went next door to bar that was so much closer. There was kareoke, and pool, and they handed out hats, noisemakers, and champagne. We had such a good time singing and drinking with the crew, midnight came far too early! So once again, all my love to Sweetcakes, she truly is the best.
Posted by That Girl at 9:54 PM