We had the most sinfully delicious dinner ever. Except it wasn't as bad as it could be, which is a redeeming factor. You see, I was halfway through with making these savory tarts when I realized the recipe called for cream. And I was out of cream. Normally this means a quick trip to the grocery store, but yesterday I was in no state to be driving. You see, Thatboy decided we should celebrate MLK day the old fashioned way. With alcohol! So I had already had a martini and since I think I have already established I'm not a good drinker, I was in no shape to be driving.

So I subbed in skim milk for cream, thinking I'd probably ruin the recipe, but, oh well, I think there's a little more rum in that bottle, and I'm sure we have tequila around, and everyone knows that a liquid diet is so fashionable right now.........

As luck would have it, not only did I not ruin the recipe, but this might have been the best thing I've put in my mouth in ages. I ate mine, the entire time trying to figure out if I could finish it before Thatboy finished his and subtly distract him while stealing whatever he had left.

Unlike the last recipe, this one uses Tart pastry dough and not pie pastry dough - I bet you didn't even know there was a difference. I know I didn't! According to FF, this one won't get tough from overhandling, so go ahead and throw it right in the food processor. 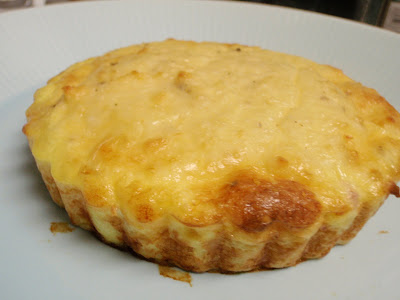 Ham and Cheese Tarts (From The Fannie Farmer Cookbook)
Posted by That Girl at 12:03 PM