I'll give you an example. Shrimp. Shrimp are a wonderfood. They can be an entree or an appetizer. They can be grilled, broiled, sauted, boiled, steamed. Eaten hot. Eaten cold. Depending on their size they can be finger foods or cut into pieces and eaten with a fork and knife. How on Earth can they get any better? Why wrapped in bacon of course! (See - it ties in with the theme of this week!)

Actually, FF's recipe is for Oysters in Bacon, but if you recall, I've already declared oysters to be one of those substitute foods. And I sub in shrimp. Because as we've already determined shrimp + bacon = deliciousness.

This is another one of those "not really a recipe" recipes. Because really. 9/10 of you could figure out how to make these merely from the name. "Hmmmmm shrimp in bacon? I obviously throw bacon at the shrimp and hope it sticks." Nevertheless, these are a sure fire crowd pleaser, whether topped on pasta, served as an appetizer, or alongside a niiiiice rare filet mignon. 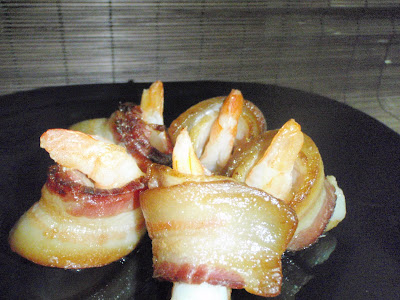