I forgot to remember

When I plopped these snacks down in front of Thatboy he took a bite and told me he wasn't a fan. Not a big deal, because we had other food on the way. But then he ate another one. And another one. Pretty soon he had eaten almost the entire plate. He said they grew on him. I guess so! Although, cream cheese is always a popular appetizer ingredient, so I shouldn't be too surprised. And doesn't everyone like things they can eat with their hands? 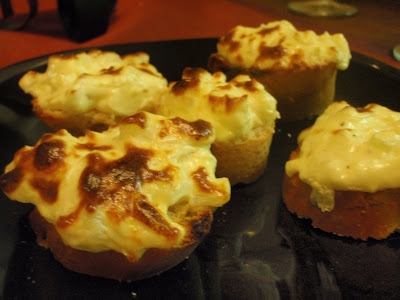 Hot Cream Cheese Canapes (From The Fannie Farmer Cookbook)
Posted by That Girl at 9:01 PM