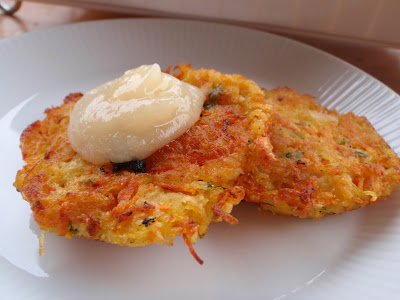 Some people may think that I chose the ingredients for Platinum Challenge based on a recipe I have in mind. This is so far from the case as evidenced by my entry this month.

I was talking to Thatboy about the ingredients: carrots, potatoes, eggs, pear, and parsley. I told him I was thinking of making a pear and chicken in pastry dish, using the egg as a wash and then roasting some potatoes, carrots, and pears to go with it. He liked that idea a lot. But then he started thinking. Since potatoes are an ingredient, and it is December, perhaps I should make latkes instead? Thatboy can be a genius sometimes. (But don't tell him that, I wouldn't want his him to start thinking he "knows things.")

Latkes have always been Thatdad's specialty, and I am thrilled to have come up with my very own recipe this year that is mine mine mine. It has some of the qualities I love about Thatdad's latkes, but with some special twists of my own. Thatboy's family fell in love with my recipe. Thatsister-in-law ate seven! Even Thatfather-in-law who refuses to eat anything I make, ate three. I didn't think it would be that difficult to add carrots and parsley to my recipe, and I thought that it might even make a welcome addition. It did. OHHHHHHHHHHHHHH were these good! SOOOO good. And the color? Let me just tell you - latkes are normally beautiful and golden. With these latkes the golden is matched in kin with a beautiful orange. Like a sunset.

I prefer my latkes with powdered sugar (and thanks to my bad influence, so does Thatniece), but Thatdad will tell you that the traditional way to eat latkes is with applesauce. But since apples are not an ingredient in this challenge, I decided to make pearsauce instead. This was a mistake because now I can never buy applesauce again. Thatboy has declared that he prefers pearsauce to applesauce, and since it only took 20 minutes to make, I don't think I can justify not making pearsauce. I think this year I'm going to have to learn to start jarring!
And I'm hooooping this entry might inspire some more of you to enter the Platinum Challenge. So much so that I'm extending the deadline another week! So you have until next Friday. Get your entries in soon! 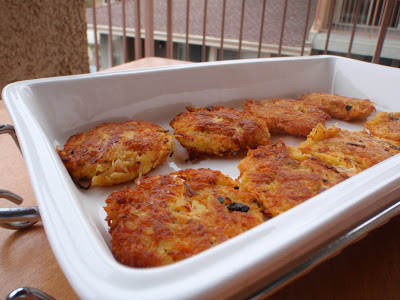 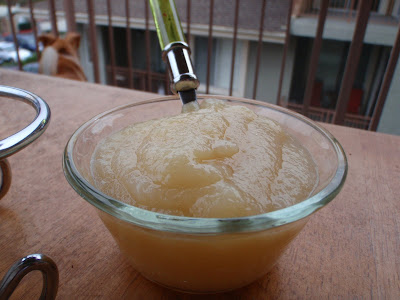 Potato and Carrot Latkes with Pearsauce
Posted by That Girl at 7:32 PM