I love looking at Allrecipes and seeing the comments. Comments like "My family hated this mushroom chicken. We don't like mushrooms, so we left them out, and instead of butter we used pam, and we added about 2 cups of onions. This recipe is terrible!"

Now, the problem here is obviously not the original recipe, but the person who decided to venture far off from the recipe with all their substitutions and add ins. And that my friends, is what we're about to do!!!!

We'll begin with the Montpelier biscuits, otherwise known as "common crackers"........yeah.......the main ingredient in this recipe......let's just say they are impossible to find. Apparently, if you live in Vermont, you can get these by the barrel - literally. Here in California you have to mail order them. But they look like pretty basic crackers, right?

So I picked up my own common crackers - Carr's.

Then next ingredient snafu I had was the sliced cheddar. I accidentally grated all my cheddar trying to make my life easier. But I did have some of Thatboy's favorite on hand, and I figured warm brie on crackers sounds mighty tasty. So for those of you playing along at home, we now have brie on crackers instead of cheddar on biscuits.

And because good things always come in threes, I ran into another little snag while putting together the recipe. You see, apparently, these Montpelier biscuits, or common crackers can be sliced in half. My Carr crackers? Not so much.

The good news is, you really can't go wrong with melty brie on crackers! So I give this recipe a big thumbs up. Even though it's a far cry from the original. 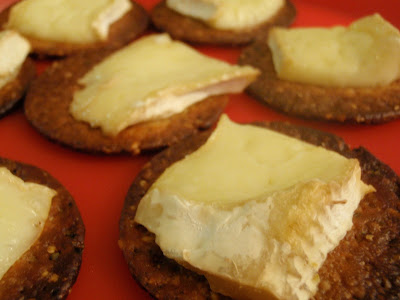 Montpelier Biscuits and Cheese (From The Fannie Farmer Cookbook)
Posted by That Girl at 11:25 AM