Oh Fannie, crackers are not your friend, are they? Were you taunted with triscuits at a young age? Wounded by a wheat thin?

First we had those dreadful cheese wafers - which were more like cheese crumbs.
Now comes the Benne Pastries.

Pastries? Really? Because when I think of pastries I think of something doughy. Sometimes fluffy. Usually flakey.

These definitely fall in the "cracker" category more than the pastry category. And I'm not fooled by the mock french name. I don't think you'd find these in any patisserie.

The recipe itself has some kinks. I let the dough "chill" and it turned into a rock solid ball. Like playdough left out overnight. Not a pretty sight. I let it sit out on top of the warming stove and it was still a rock. Eventually I heave-hoed a sigh and added water until it was a workable dough ball.

As you'll see from the picture below, these "pastries" also suffered from the dreaded crumb disorder, but I was able to keep them a tad more together than the cheese wafers, although I made them a little thicker to compensate.

As for the result, I think Thatboy described them best: "You take a bite, and you're like, hmmm, these aren't bad. And then you taste the sesame seeds and are like, man this is pretty sesame seed heavy, I don't think I like them. And after you finish one, you're like, oooohhh I think I'd like another." 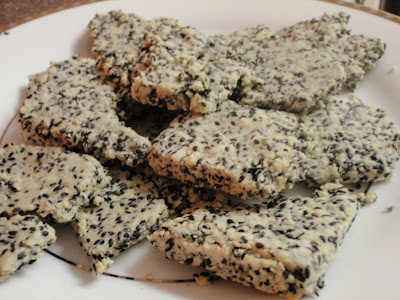 Benne Pastries (From the Fannie Farmer Cookbook)
Posted by That Girl at 11:27 AM