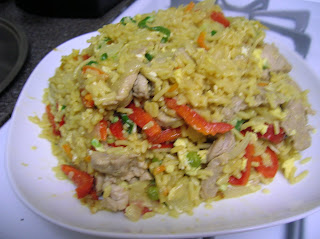 This is a major disclaimer for two reasons. First because I don't want anyone in middle America to mistakenly believe this is "Chinese food." Second because I would like to ward off the inevitable hate mail that is sure to ensue if I tried to pass this off as authentic. And this is as far from real Chinese food as you can get.

But I had a craving for fried rice and I've never made it before. I've made other actual honest to goodness authentic Chinese dishes before, but something about fried rice intimidates me. (In my defense, I would bet a million dollars that fried rice isn't an authentic Chinese dish to begin with, but I digress). So I took a short cut. A nonauthentic, cheater cheater pumpkin eater short cut. I bought packaged fried rice. (GASP - THE HORROR!) My only saving grace is my willingness to admit my secrets and not try to pass this off as anything more then it is - an easy weeknight meal that tastes good! 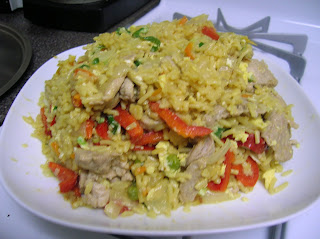 1) Cook pork in large skillet with olive oil over medium high heat until cooked through. Remove pork from pan.
2) Add onion to skillet and cook until softened.
3) Stir in water and fried rice. Bring to a boil. Reduce heat and cook covered 12 minutes.
4) Combine eggs and green onions. Pour over rice and cook 2 minutes covered.
5) Stir in red pepper and pork and cook until heated through.