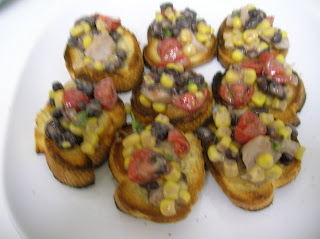 So there's a whole group of people that get their panties in a bunch over misuse of the word brushetta. I'm not one of them, but just in case you ever run across them in your day to day life I'll help you out a bit. Bruschetta does not refer to a bread topped with tomato/basil/oil mixture, but rather, just the grilled bread itself.

This has been a loooong week. I've been pulling a ton of all nighters lately(which aren't really all nighters, but any time I get less than 6 hours of sleep I call it an all nighter) and this week was no different. I seriously thought the week would never end! And since I've got my first catering gig tomorrow (I promise I'll go to bed soon Liz) my day didn't end when I got home from work. But such is the life. I like to look for the light at the end of the tunnel, so tonight on my 2 hour drive home I kept thinking "only 1 more week of this drive." I wish I had something more to look forward to like an end to long weeks, a break from work, a vacation, pretty much anything, but the last of the long drives will have to be what keeps me going for the next week. And my light at the end of the tunnel for tonight? Another Friday night snack. Mexican Bruschetta. 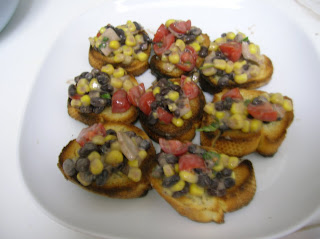 1) Preheat broiler. Brush each slice of baguette with olive oil and place on baking pan under broiler. Broil 1-2 minutes each side, or until golden brown.
2) Combine remaining ingredients.
3) Top slices with bean/corn mixture.
Posted by That Girl at 7:24 PM